When I arrived in Wales I knew almost nothing about the country. I knew of Wales’ tenuous history with England, that the Tudors were originally Welsh and of course, had heard a few bawdy jokes about “sheep-shagging.”

Beyond that I was clueless.

But luckily we had a local to show us around. Liam, my friend Lauren’s boyfriend, grew up in Wales and offered to host us for a few days at his home in northern Wales.

So one rainy morning the five of us (me, Lauren, Liam and two of their friends) set out from Lincoln and drove across the Peak District, whose wet, lonely moors made me feel I was a character in Jane Eyre.

Soon the moors became beaches, the signs featured Welsh and we were in a brand-new country. 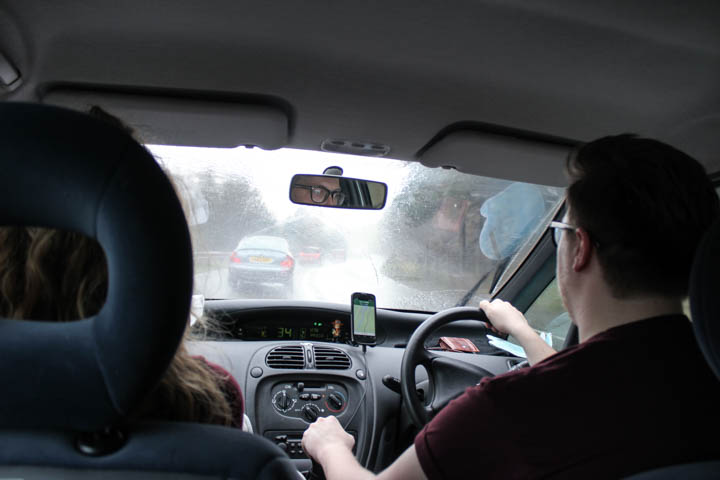 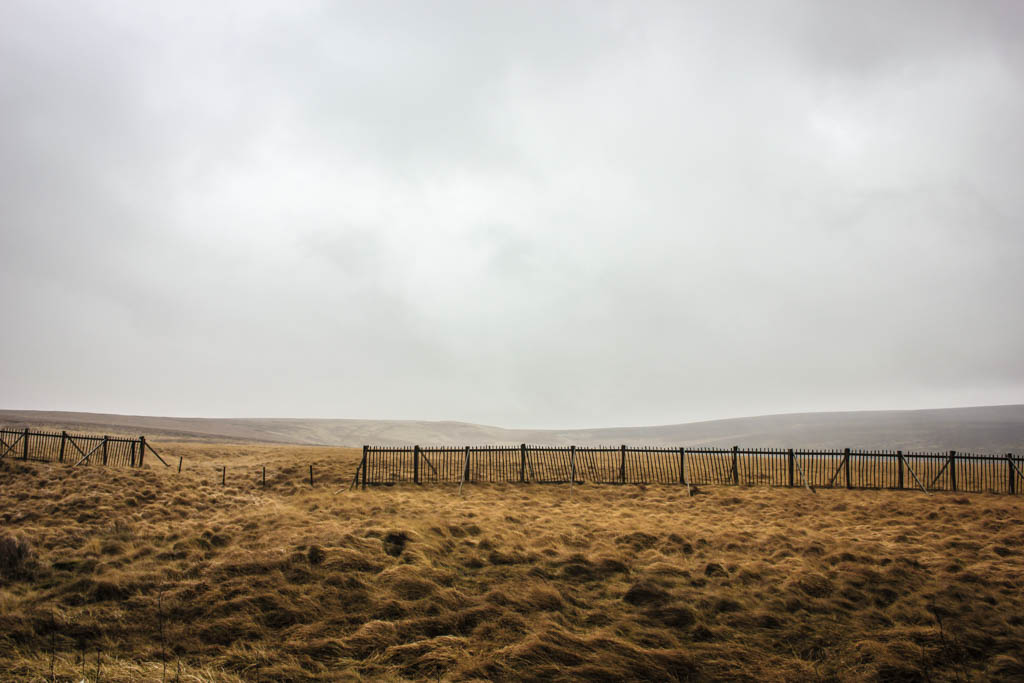 I quickly learned that Wales is kind of like the Shire but with more castles, beaches, mountains, and slate houses. In short, Wales is a country that is equally quaint and striking, with a unique kind of Welsh charm all its own. 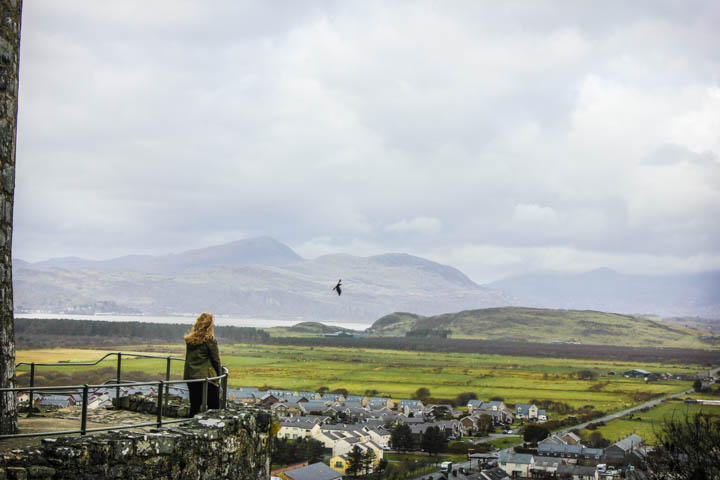 Wales is an undoubtedly gorgeous country. As we drove south along the sea I marveled at the landscape: miles of blond-sand beaches, gorse clinging to the mountainside, ivy-clad stone sheep paddocks, rows of slate houses looking out over the sea.

And there were so many lambs! Sometimes the sheep were so far away they just looked like cream-colored dots on a hill, but up close I noticed their wool was blowing in the strong wind and that many were spray-painted with little blue circles.

2. Wales has tons of castles 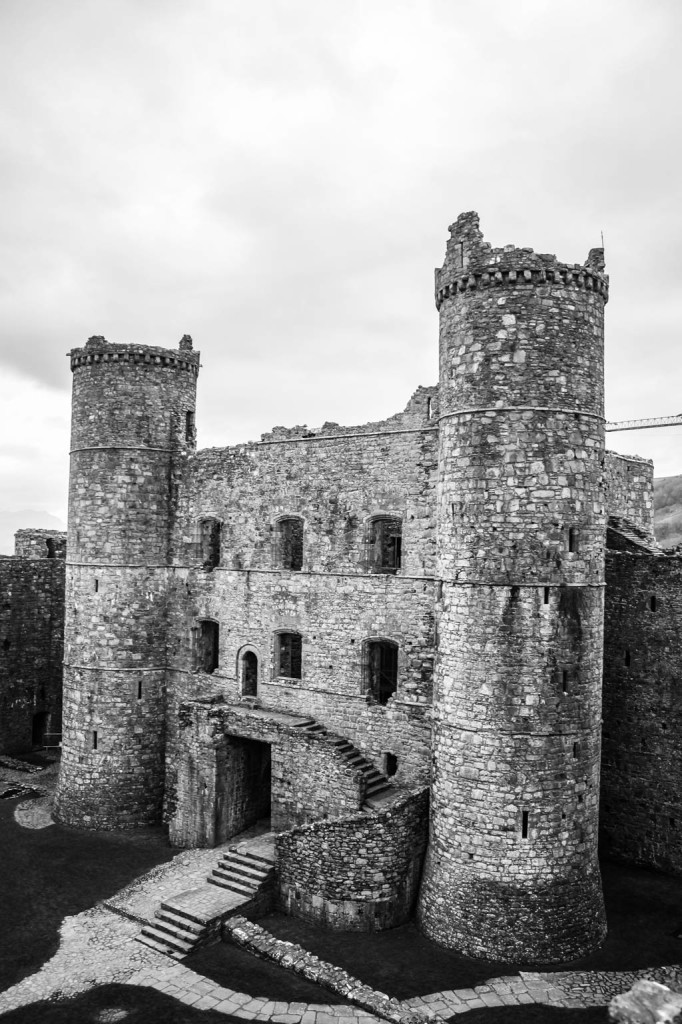 As you drive in Wales it seems there’s about a castle every mile- it’s incredible.

While the only castle we visited was Harlech Castle, it sure is a beauty. Harlech Castle is a UNESCO World Heritage site that UNESCO declares is “the finest examples of late 13th century and early 14th century military architecture in Europe.”

I loved snapping photos of the corbelled towers and crumbling staircases- the castle was straight from a medieval fairytale. 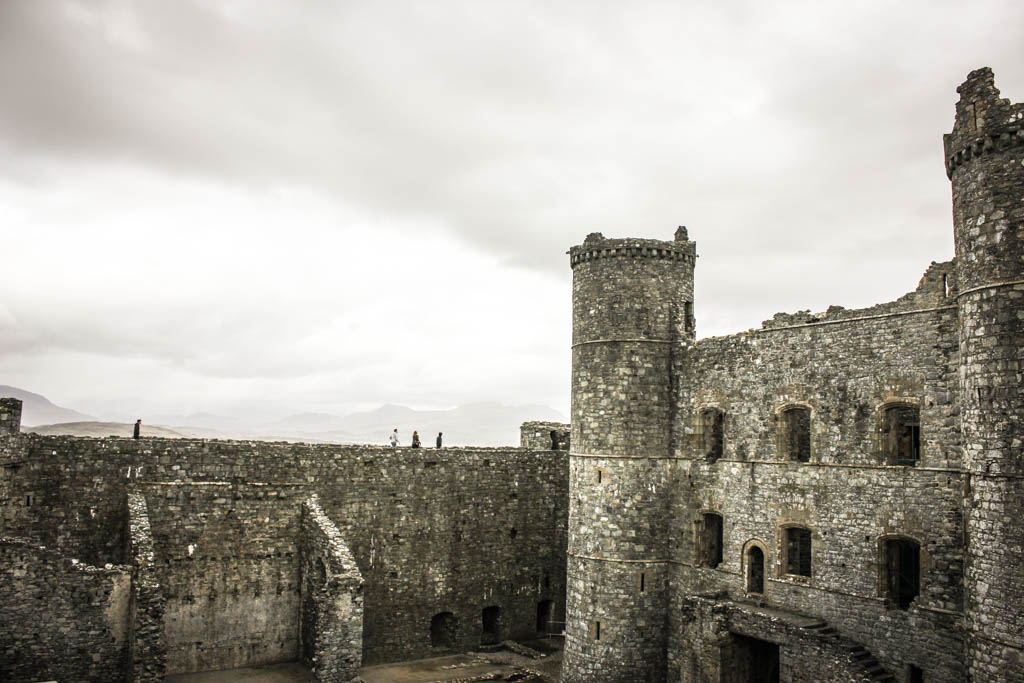 What’s neat about Harlech Castle is that locals get in free. Liam joked that everyone would be able to get in free if it weren’t for the elephant in the room, “Ashley’s American accent.” Whoops.

Liam also told us tales about how the local high schoolers sneak into the castle and drink there. Why did I never party in a medieval castle in high school?

As my friend’s town is so close to Snowdon, the highest mountain in Wales, I proposed that we hike it. But apparently it’s not for beginners; hikers get lost in fog there and sometimes die. Next time?

4. Everything in Wales is made of slate 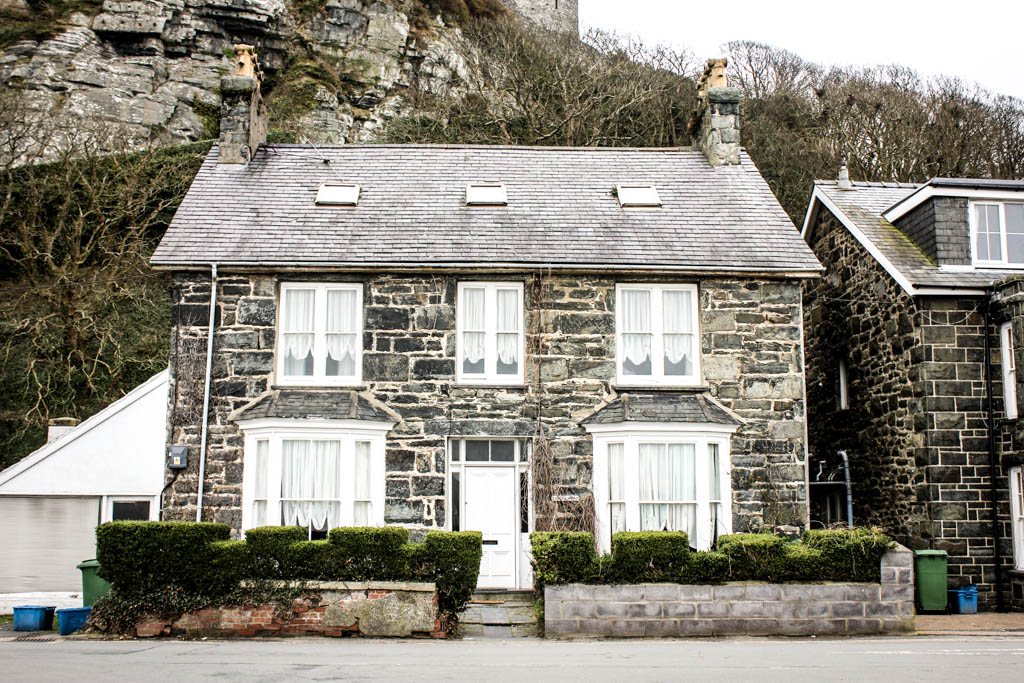 After I got over the medieval castles, I noticed the abundance of slate. Apparently, the slate industry has been important in Wales since Roman times and considering how many slate mines we drove through, must still be.

Can we talk about how charming slate houses are? 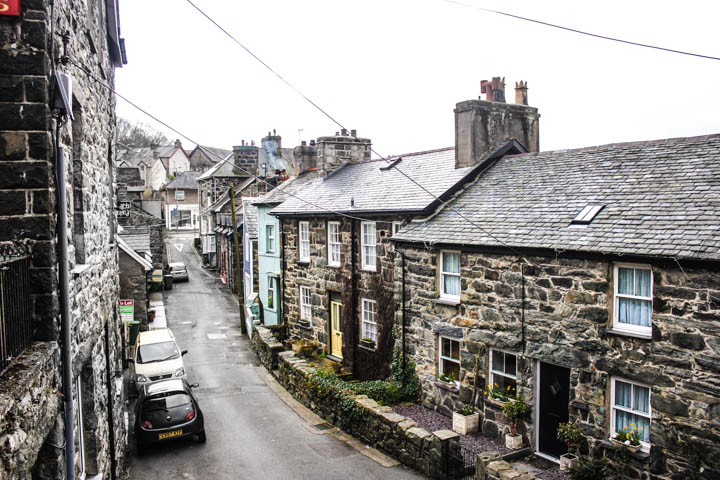 5. Welsh is spoken more in the north than the south

While not everyone in the north of Wales speaks Welsh, the majority of the population are bilingual. To me Welsh sounded like the sloth from Ice Age was speaking Martian; a lispy, consonant-filled language like none I’ve ever heard.

Did you know Morris, Williams, and Jones are all Welsh surnames?

I kind of fell in love with Liam’s tiny Welsh town on the sea. Along with an unpronounceable name, Harlech has a population of less than 2,000, a sea-breeze scent and the freshest tap water I’ve ever tasted.

As we walked about the town I realized that Liam literally knew everyone in town which definitely gave me small-town envy. 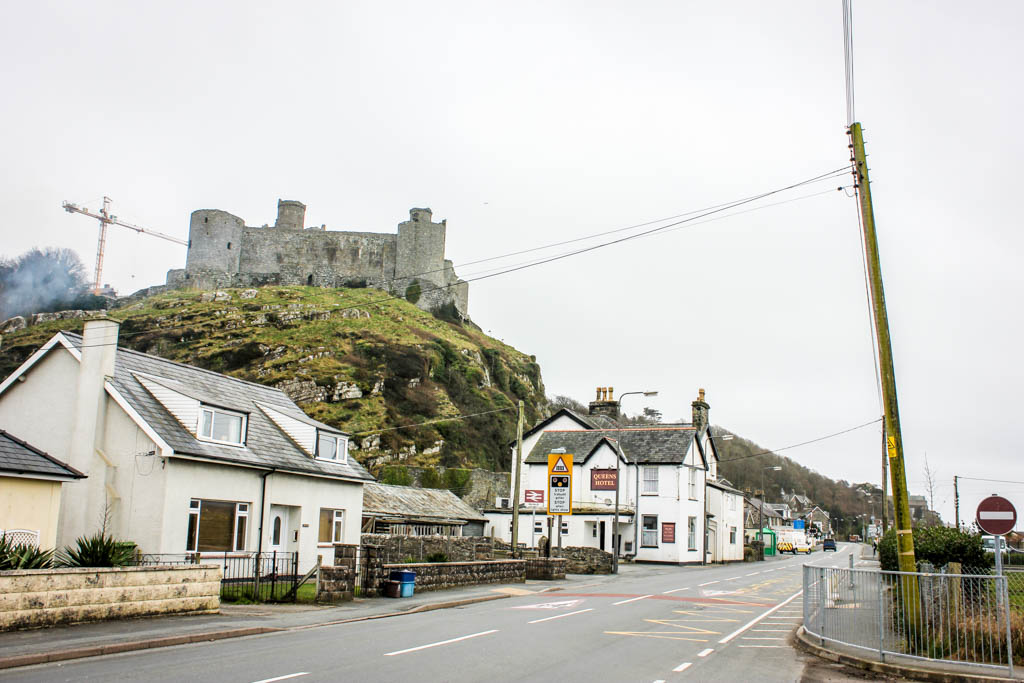 8. The Welsh sea is cold in March

Well, I suppose I could’ve guessed this.

One night we headed to the pub and after several pints, I convinced everyone to walk to the beach. But alas the glacially cold water foiled my plans to swim- I only made it to my mid-calf and decided to put my leggings back on!

And while I was shaking the sand out of my boots the next morning, the glittering stars and empty beach were worth it.

9. The Welsh language is in danger

Sadly, I think I could’ve guessed this too.

I chatted with a local Welsh guy about his perspective on the Welsh language. “The biggest mistake is that,” he said, pointing to the elementary school. “The Welsh government is forcing kids to speak Welsh at school. But if you force them, they won’t want to speak it.”

As you guys know, I’m kind of a linguistic freak and love learning about local languages. And while language preservation is something I’m very passionate about, it’s kind of an awkward cause because you can’t donate to it.

Anyhow, the Welsh guy said speaking Welsh was very important to him and he wanted his children to grow up speaking Welsh. And while he doesn’t speak Welsh with everyone in town, he said he couldn’t imagine speaking English to the WWII vet down the street. 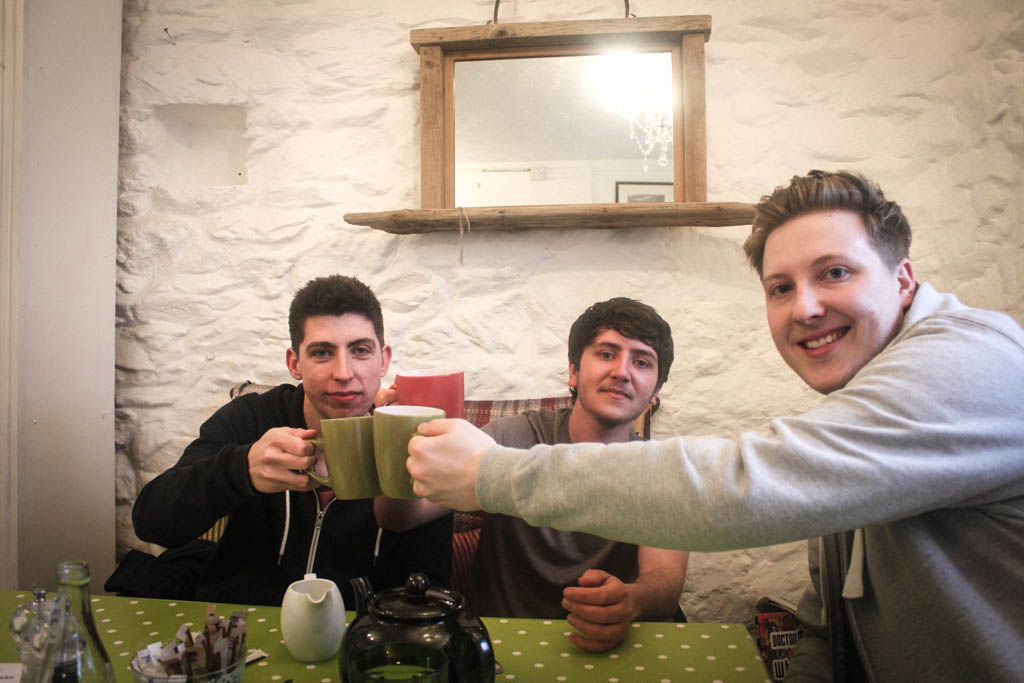 As an aside I wanted to thank Lauren, Liam, Steve, Dylan and Liam’s family for showing me such a great time in Wales. Diolch yn fawr!

Have you ever been to Wales?

15 thoughts on “9 Things I Didn’t Know About Wales”