What could be written about the temples of Angkor that hasn’t been written before? Well after reading countless blog posts and travel articles about the temple complex, I thought there was no way I’d enjoy visiting: it’s simply too well-known, touristy and firmly situated on the beaten track.

Well surprise, surprise- I loved Angkor Wat and the many surrounding temples. There’s a reason that Angkor Wat is a UNESCO World Heritage Site and featured on everything from Cambodia’s flag to its best-selling beer.

And just to avoid confusion; Angkor Wat is the central, most famous temple of the Temples of Angkor but there are more than 35 temples total.

We left the hostel at four a.m. (ugh!) to meet our tuk-tuk driver and drive to Angkor Wat for the sunrise. Being the extremely sensible girl that I am (ahem), I tucked in early the night before and awoke bright-eyed and ready.

My travel buddies for the day? Not so much. My friends had the brilliant idea of drinking until dawn instead of sleeping, which resulted in a drowsy (albeit entertaining) group of travel companions.

When we arrived at Angkor Wat it was pitch-black so we patiently waited in the pond’s shallow water for the sun to peek over the temple. To get the best shot, I found myself frantically switching between the kit lens and 50mm.

I even shot in manual, guys. While standing in pond water. That’s serious. 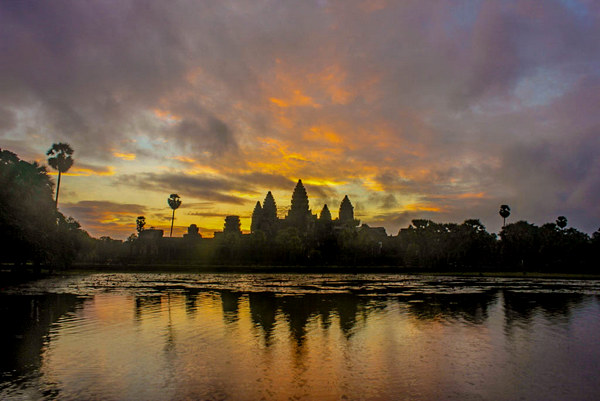 After the much-awaited sunrise, we stopped for a hearty baguette and omelet breakfast. 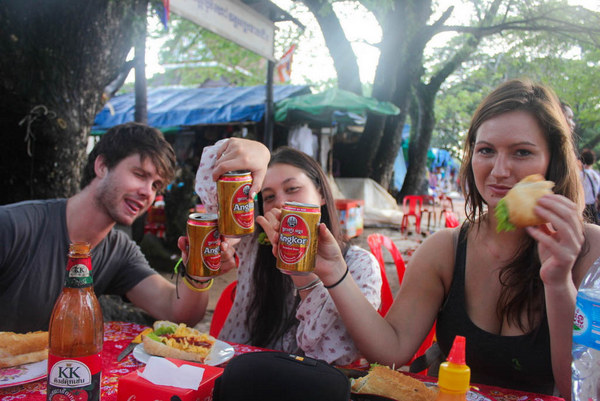 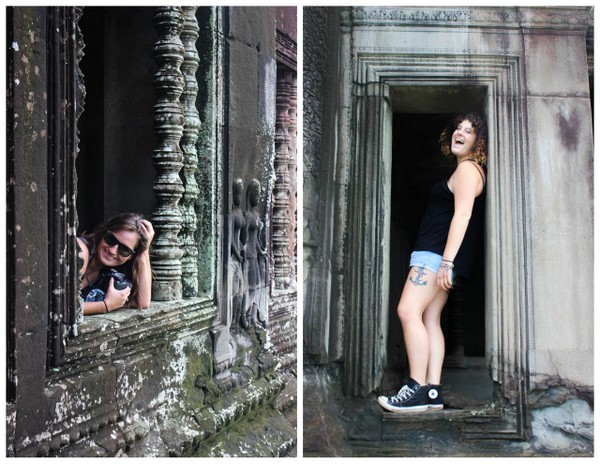 The best part of traveling with girls- lots and lots of kitschy portraits! 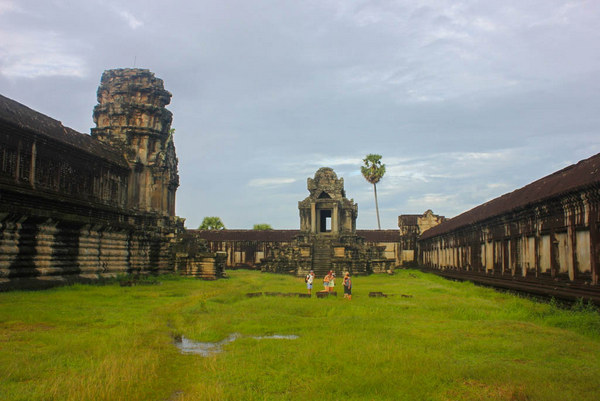 What surprised me most about Angkor Wat was the relative lack of tourists– rather than dodging fellow camera-toting tourists, I found myself lackadaisically wandering about and snapping shots of all the beauty before me. 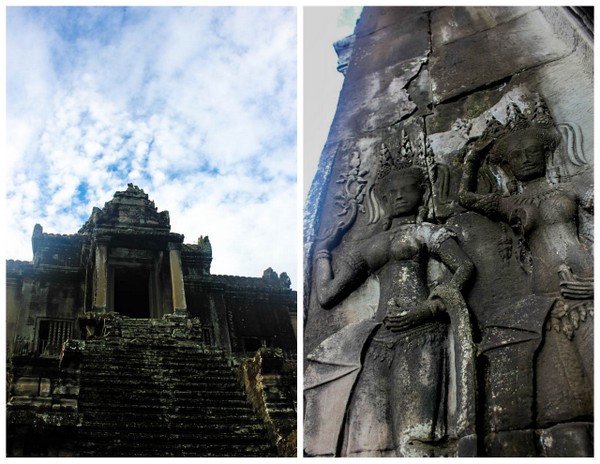 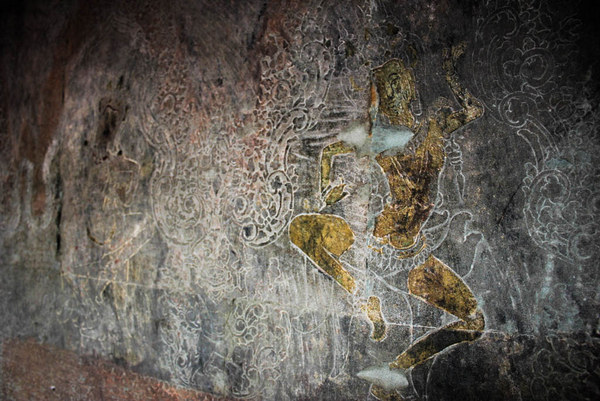 After Angkor Wat, it was back to the tuk-tuk for a visit to the nearby temple Ta Prohm. And for some of us, nap-time. 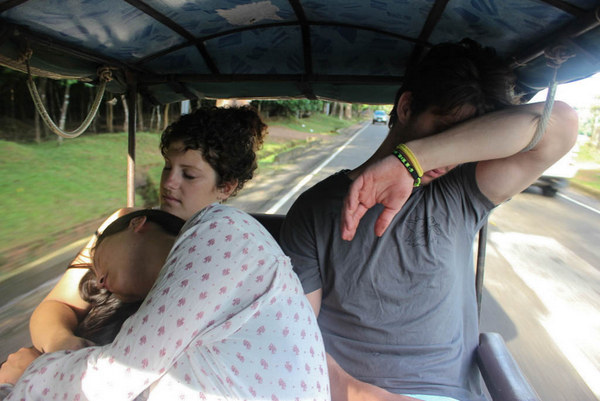 Ta Prohm, more colloquially known as “The Tomb Raider Temple” is one of Angkor’s most popular temples and is especially known for its atmospheric back-to-nature appearance, with trees twisting around and shooting above the ruins. 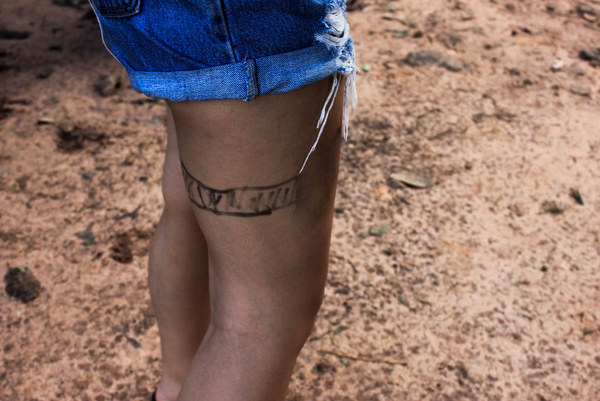 Our failed drawing to try to be more like Lara Croft. Ha.

A one-time Buddhist monastery and university, Ta Prohm now seems like a temple the jungle wants to reclaim. It’s absolutely gorgeous and makes you feel a bit like Indiana Jones. 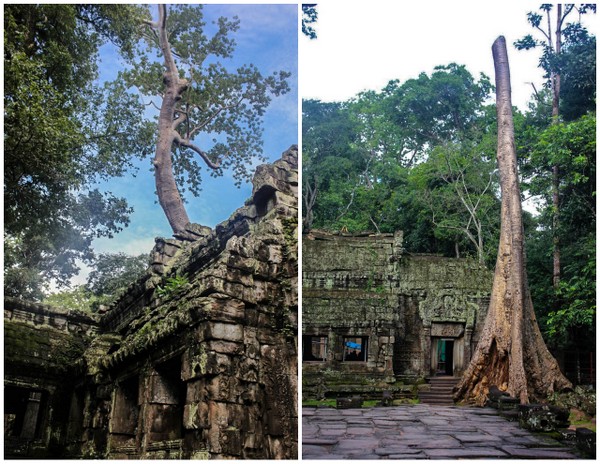 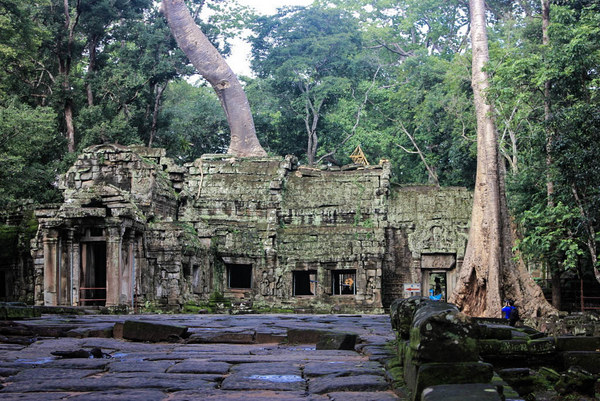 Culture aside, one moment of comic relief was when my Australian travel buddy Luke broke his flip-flops (or thongs, as he would said) after falling in the mud. He then proceeded to wander around the temples barefoot for the rest of the day.

(Side-note- these were the same flip-flops he drunkenly stole from the hostel that morning, haha.) 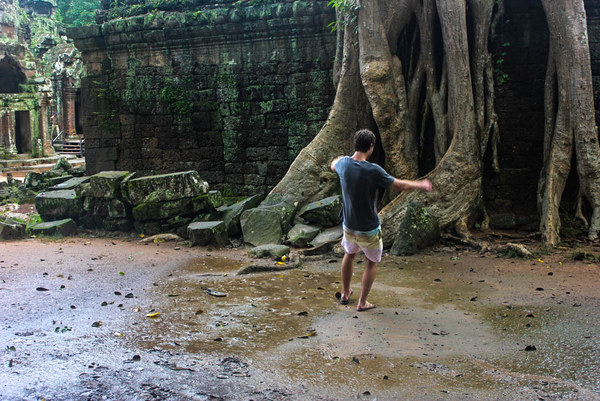 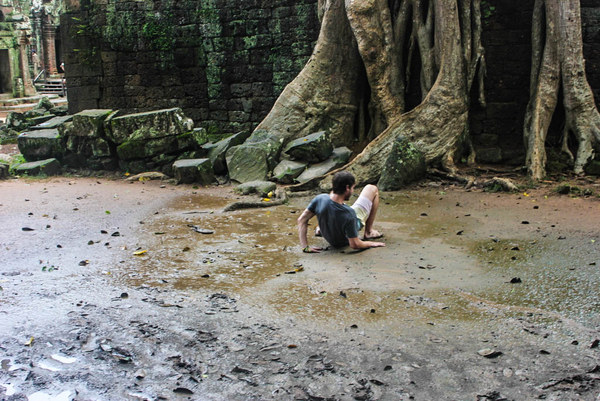 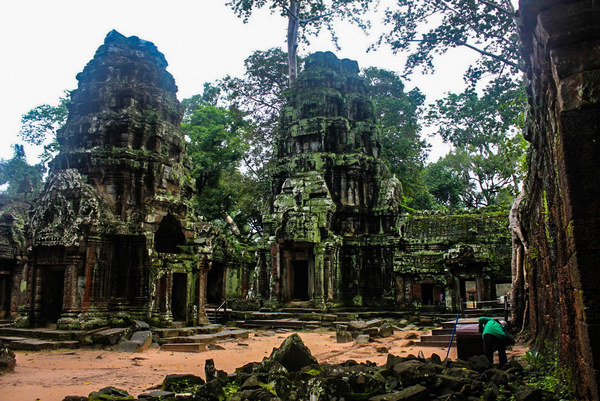 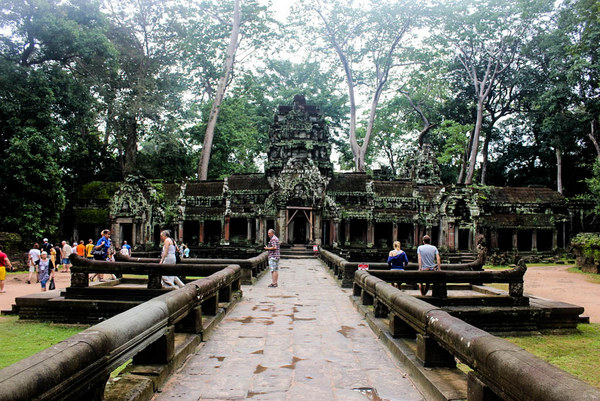 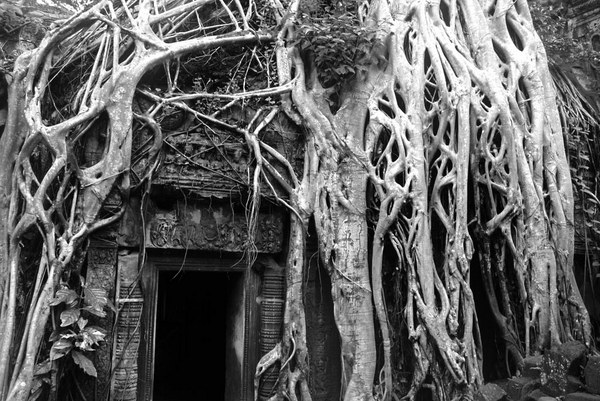 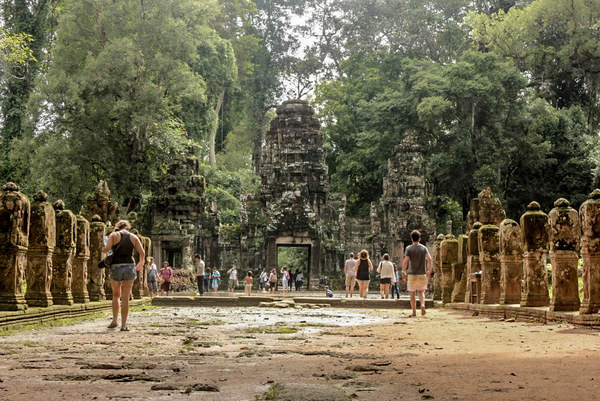 Our third and final temple of the day was Preah Khan, one of Angkor’s largest temples. Preah Khan, Khmer for “Royal Sword”.

In order to enter the temple, you pass by many garudas, mythical birds prevalent in Hindu mythology that are meant to protect the temple. While of the three this temple was the least impressive, it was still worth a look around. 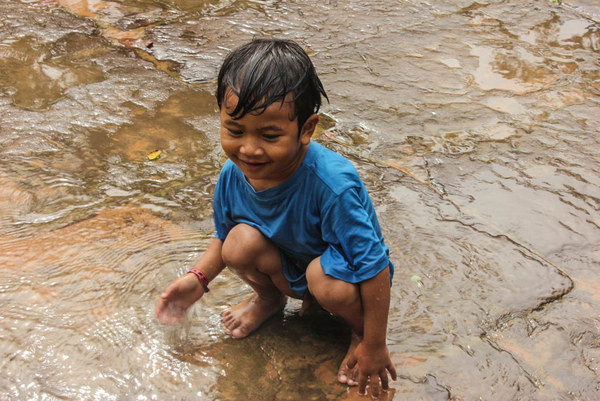 A cute little boy playing in the water outside the temple.

Overall I was surprised by how much I loved the temples, and by how much I am dying to go back. Rather than being surrounded by others, I was able to soak in the ruins in solitude. This may have to do with the fact that we visited in October, the peak of Southeast Asia’s off-season.

By the end of the visit I did find myself a little annoyed by the little kids selling postcards and bracelets whose sale strategy was to relentlessly follow you and beg you to buy their merchandise. You buy cold water, one dolla? It made me incredibly sad that these kids are forced to sell to tourists all day when they should be at school. 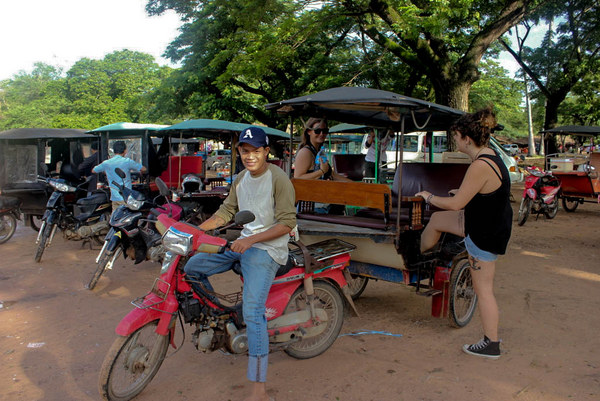 One of my regrets of the day was that  being I didn’t get to see Bayon or Ta Keo temples. For reasons I will explain below.

Long story short, we were hugely ripped off by our tuk-tuk driver. We each paid $5  (a grand total of $25) for a full-day excursion. When we voiced after three temples that we wanted to return to the hostel for lunch, he said that if we went back he wouldn’t take us back to the temple- so the tour was over.

Here’s a tip- pay your tuk-tuk driver half of the money up front and half when you get back. We paid in full from the start which was probably why we were ripped off. And like Audrey, I would highly recommend hiring a tuk-tuk driver rather than renting a bike to see all the temples.

Passes are sold in one-day ($20), three-day ($40) and seven-day ($60) blocks that must be used on consecutive days. Photo taken on the spot with free of charge is required at time of purchase.

Visiting hours are 5:00AM – 6:00PM. Angkor Wat closes at 6:00PM, Banteay Srey closes at 5:00PM and Kbal Spean at 3:00PM. Always carry your ticket. It will be checked upon each park entry and at major temples. There is a significant fine for not possessing a valid ticket inside the park. A regular admission ticket is not required to visit Phnom Kulen, Koh Ker orBeng Melea, but there is a separate entrance fee of $20, $10 and $5, respectively. (Source)

Bring a big bottle of water. You’ll be walking a lot and the temples are hot!

As cited above, there are one, three and seven day passes to the Temples of Angkor. I went with the one-day pass and wish I had gone for three- I could have easily spent longer scoping out these amazing temples.

Make sure to dress modestly. Have your shoulders covered as well as pants or a skirt that covers your knees- due to my stupid mistake of wearing jean shorts I was unable to climb up to some parts of Angkor Wat.

Have you ever visited Angkor Wat? What did you think of it?

If you enjoyed this post please consider sharing it! Also, I’d love to keep you updated on my adventures in Asia and beyond, so feel free to subscribe to Ashley Abroad via RSS or by email in the sidebar.

16 thoughts on “In Awe of the Temples of Angkor”