Ever since visiting the Alhambra Palace in Grenada, Spain, when I was 16, I’ve had a serious soft spot for Arabic or Moorish architecture. I find myself fawning over the horseshoe arches, the intricate, geometric patterns, the swooping Arabic calligraphy… and there’s no better place to bask in the beauty of Arabic architecture than at Istanbul’s Blue Mosque. 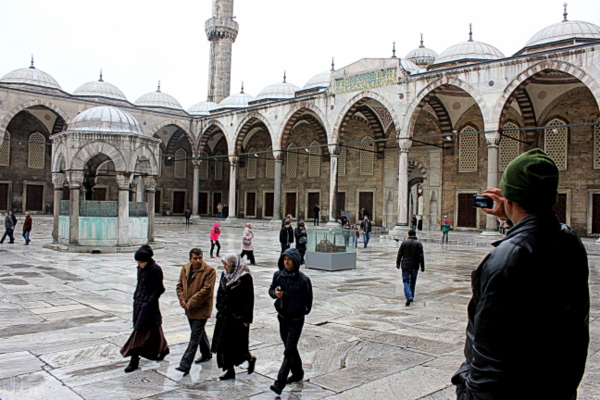 As I had been harassing my poor cousin to see every tourist site in Istanbul, Suzy nonchalantly advised me not to go into the Blue Mosque. “Seriously, it’s just blue tiles,” she told me with a whiff of her hand.

And I love you cuz, my in this itty-bitty instance I’m pretty glad I didn’t heed your advice. 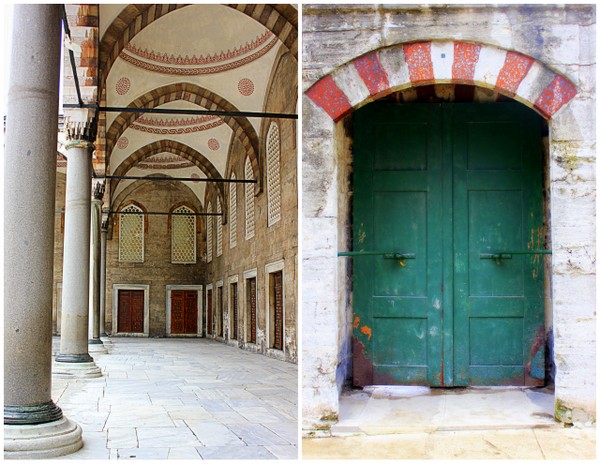 The Blue Mosque is not nearly as old as the Hagia Sofia, Istanbul’s world-famous church turned mosque turned museum. (Which is laughable because Blue Mosque construction started in 1609. You know, as in before my country was a country.) 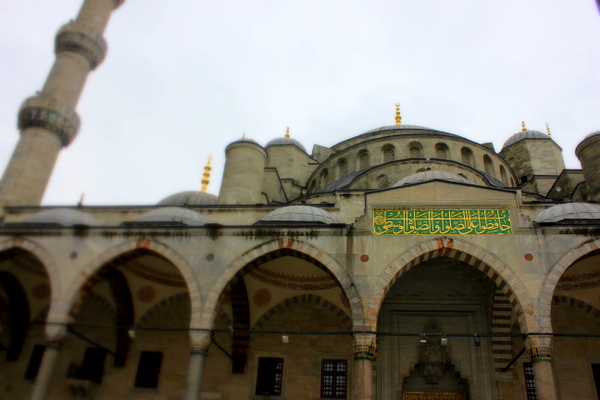 One of the things that surprised my most about Istanbul was by how secular it is: most women don’t wear hijabs, alcohol is drunk freely and despite hearing the call of prayer throughout the day, my cousin’s Istanbul-born boyfriend remarked, “You hear the call to prayer but the mosques are empty.” 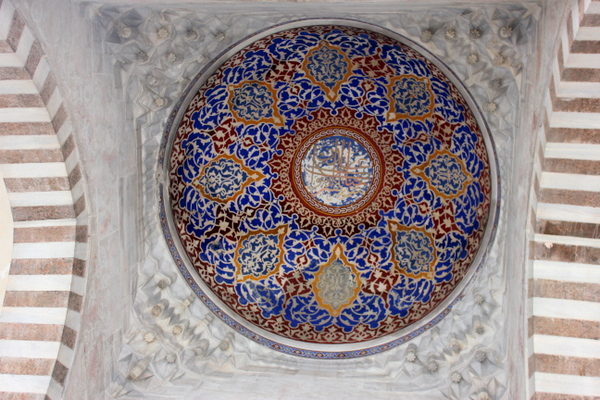 Well this mosque was certainly not empty, and when I first entered I whispered, “Oh my God.”

Which I quickly retracted and instead breathed, “Wow.” 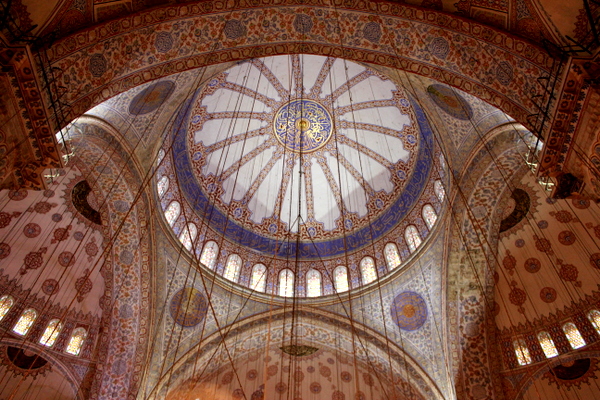 And then I saw firsthand where the blue mosque gets its namesake- from the thousands of hand-made, bright blue tiles covering the walls. 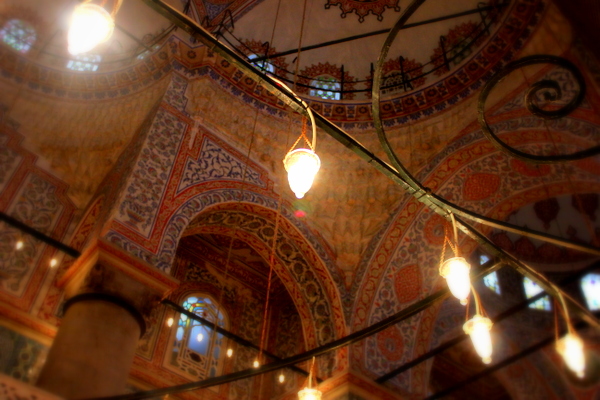 And while the Blue Mosque is now certainly a tourist attraction, it is still a working mosque, which is why everyone took off their shoes and some were silently praying. 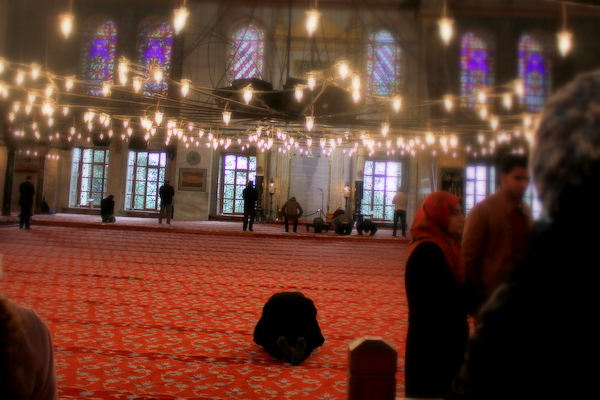 Which is also why, um, this happened. Not my best look, eh? 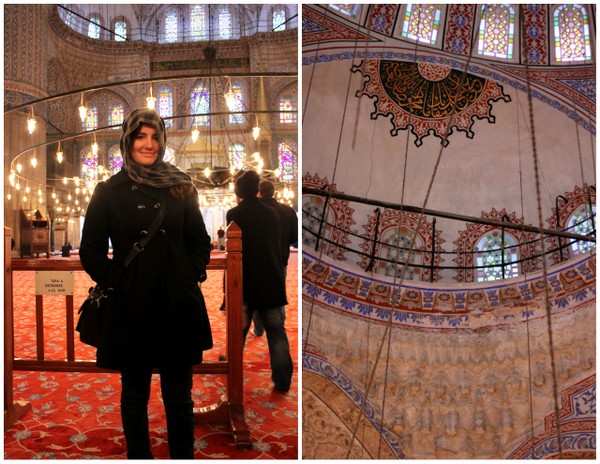 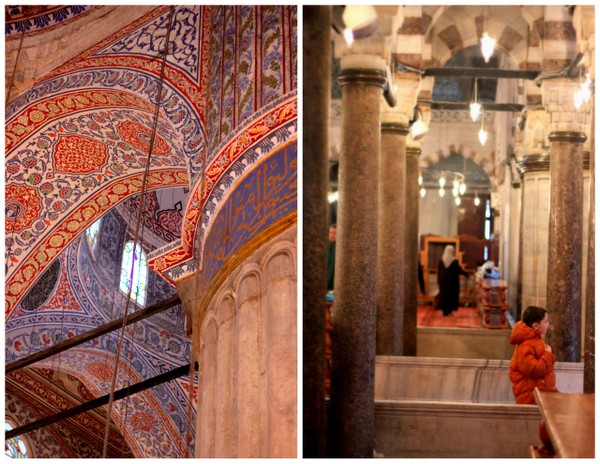 And though normally I’d wrap this up the a tidy little ending, in this case I’ll let the photos speak for themselves. The mosque was quiet, holy and memorably beautiful. It felt like a very sacred place. 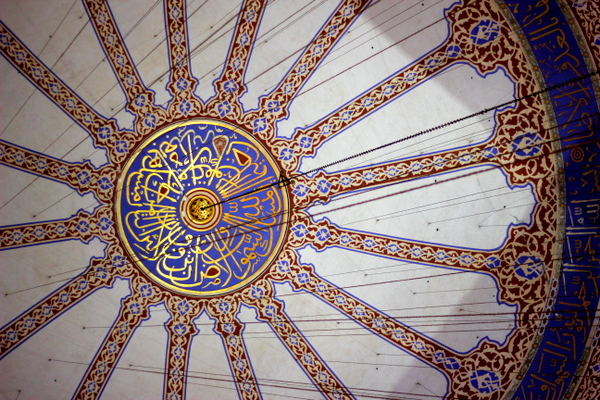 Have you ever been visited the Blue Mosque?