Long before I was a traveler, I was a nerd. My favorite movie ever is Lord of the Rings, I played Pokémon until I was a senior in high school (no, but seriously) and I’m a lifelong Harry Potter fan.

I’ve not only read all the Harry Potter books in English (obviously), I’ve read quite a few in Spanish and French. And on my 11th birthday I was a smidge disappointed that I didn’t receive an owl.

So you’ll understand why I had to see The Wizarding World of Harry Potter at Universal Studios while in Florida over the holidays, even if it meant a five-hour round-trip drive.

And considering I’d been promising my baby sister, Bee, a trip to Disney for oh say, the last decade, I decided to kill two birds with one sorcerer’s stone. (Sorry, I had to.) 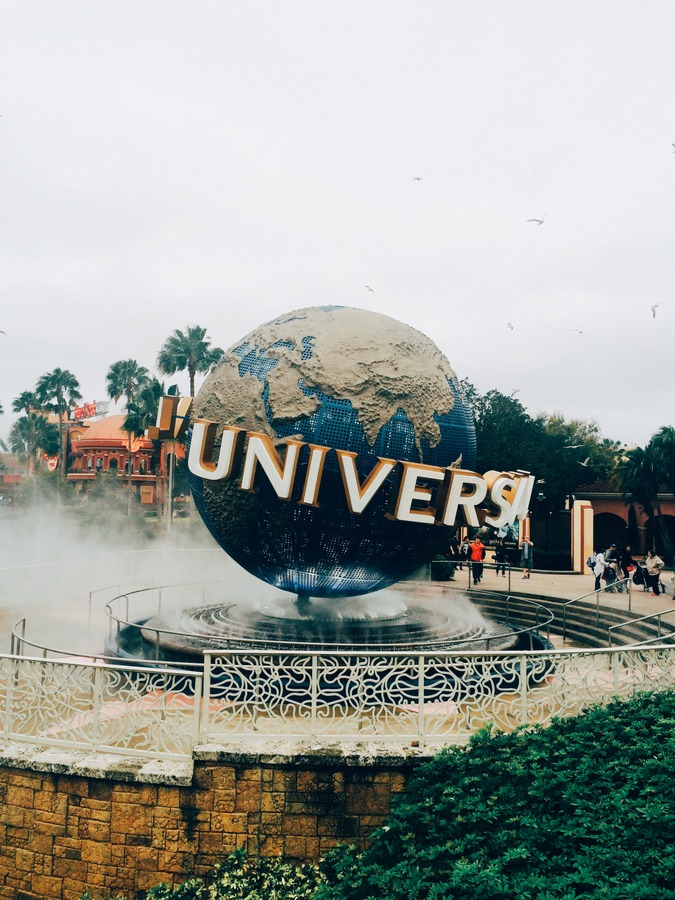 Even the outside of Harry Potter World was impressive- doesn’t this façade seriously look like London? The London stock brick was spot-on. 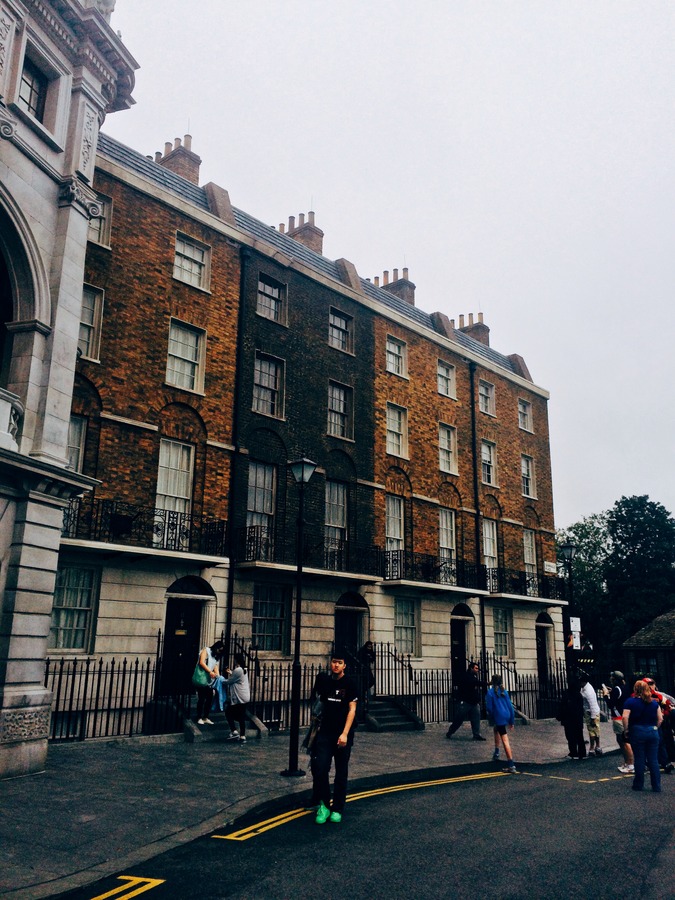 And then I spotted our first wizardly sighting of the day- The Night Bus. 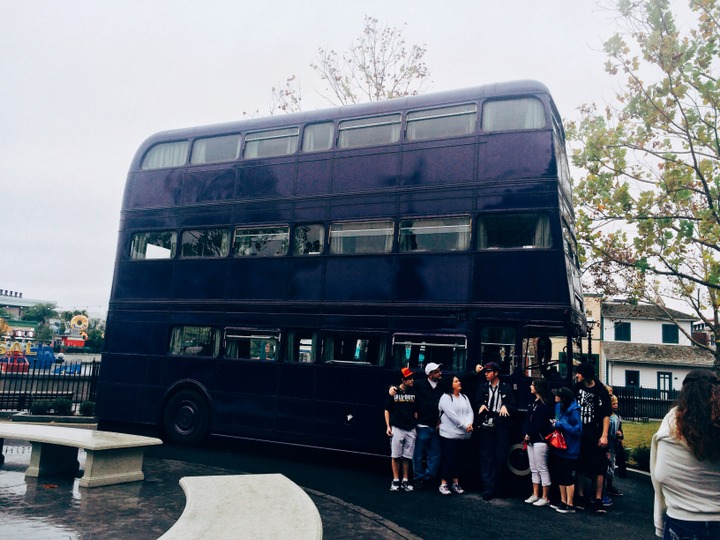 Next we moseyed over to King’s Cross. While “living” in London last year I transferred at King’s Cross almost daily, so walking inside made me feel a bit nostalgic for London, a city I miss every single day. 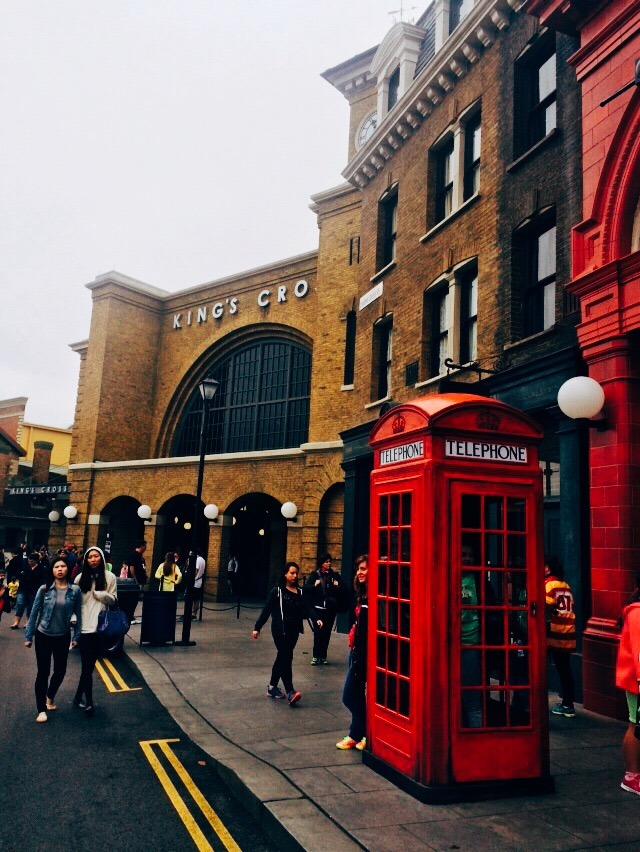 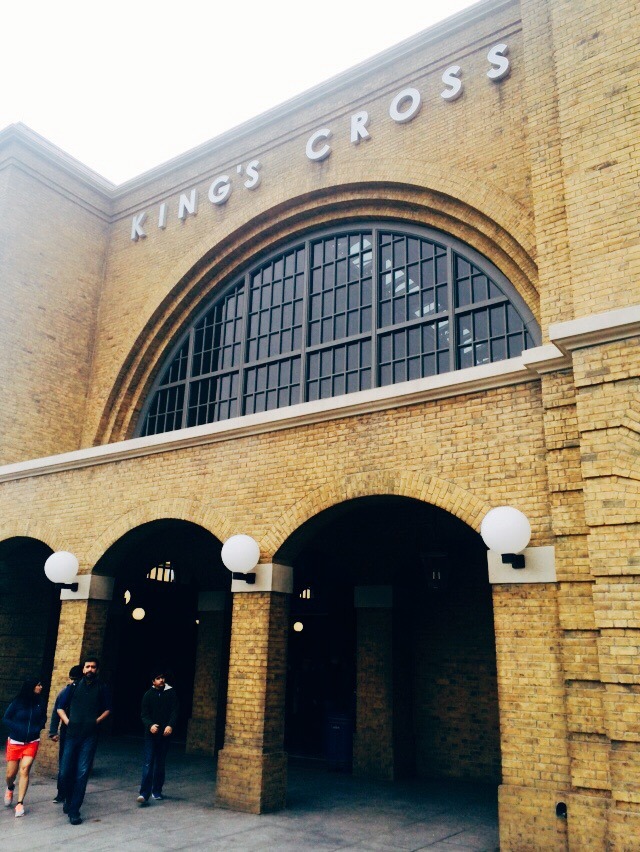 While on Platform 9 3/4 we spotted a not-realistic-at-all Hedwig, and then we boarded the Gryffindor-red Hogwarts Express. 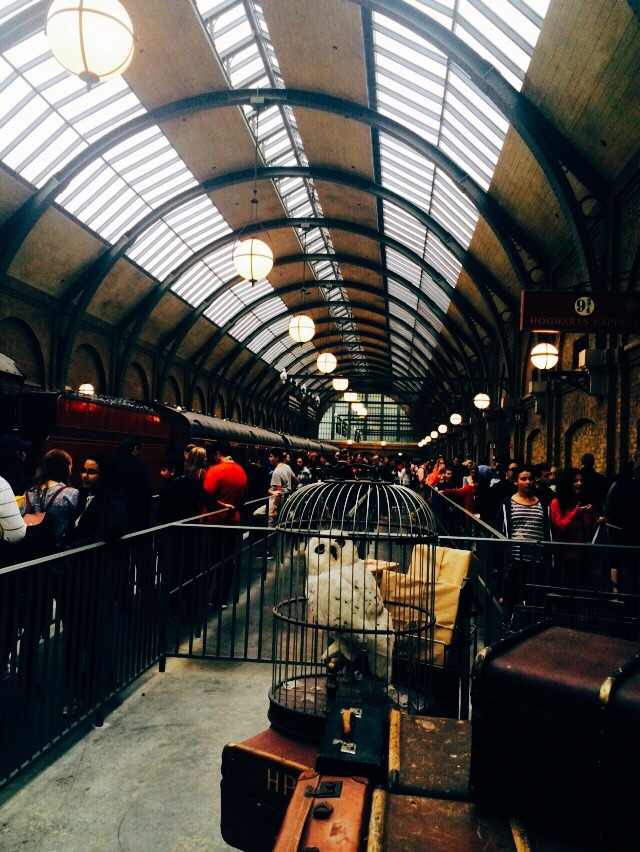 Sadly, the Hogwarts Express ride was a bit cheesy. First off, I totally expected a sweet-filled trolley to roll by. But no chocolate frogs for this girl-  only lame sound effects and and the shadow of Death Eaters in the window.

But soon we were we were in Hogsmeade. From the second I saw Hogsmeade I was enchanted by everything from the crooked chimneys to the snowy roofs. Save the Floridian humidity, it was just like the real thing. 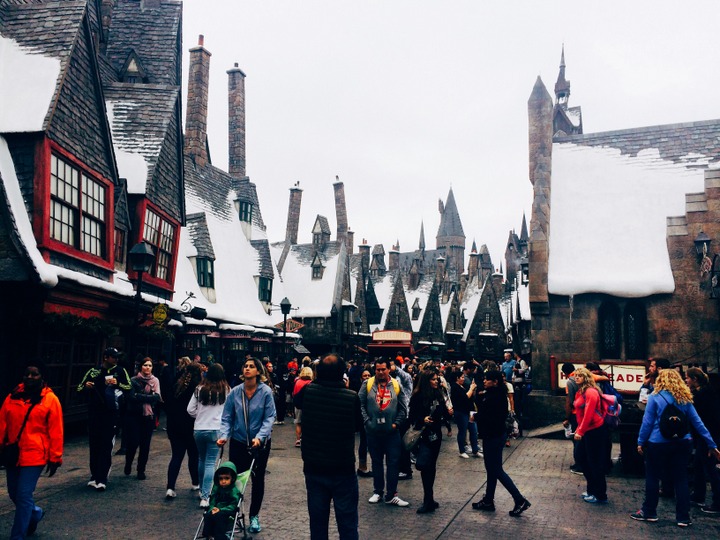 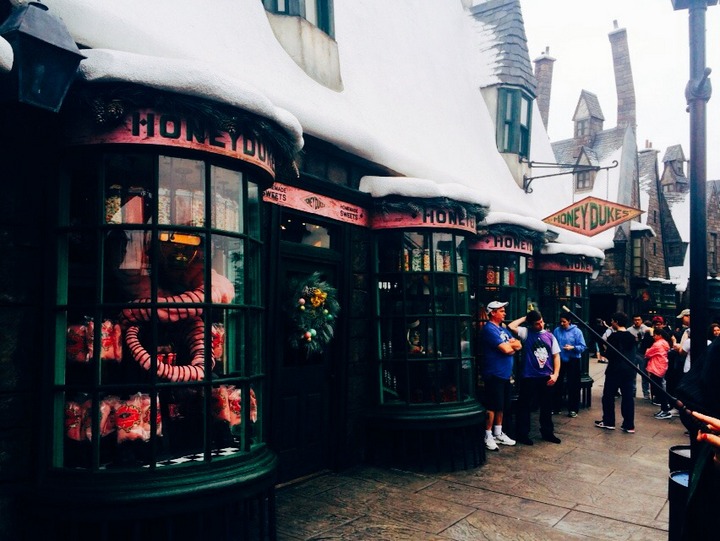 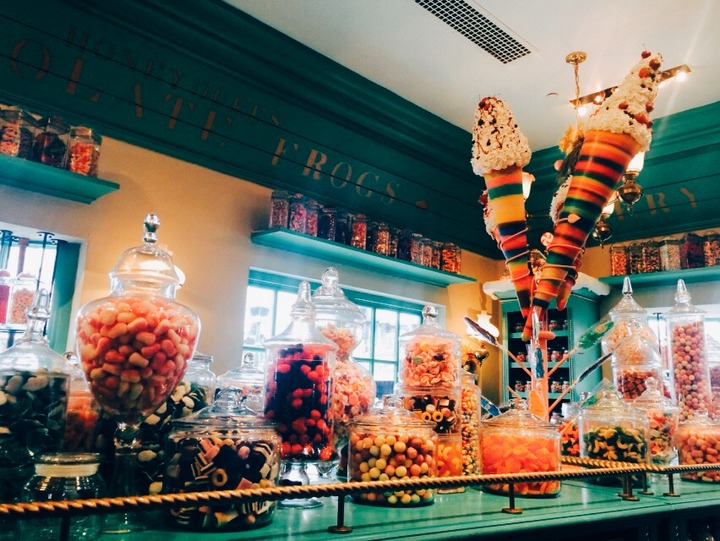 Our first beverage in Hogsmeade? Butter beer, of course. 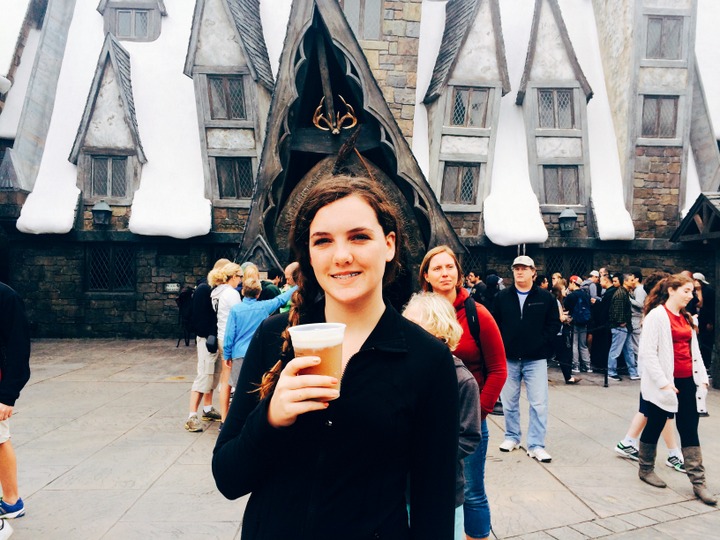 Butter beer was sadly… not very good. First of all, no alcohol (to be expected of course), and secondly it tasted like cloyingly sweet butterscotch. 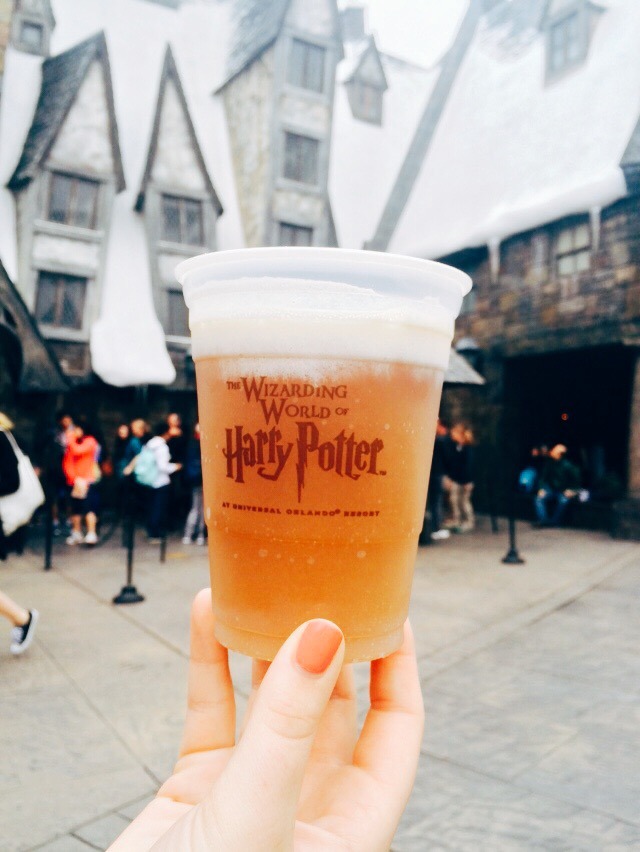 My knock-off @girleatworld pic. In full disclosure that’s my sister’s hand- as if my nails ever look that good. 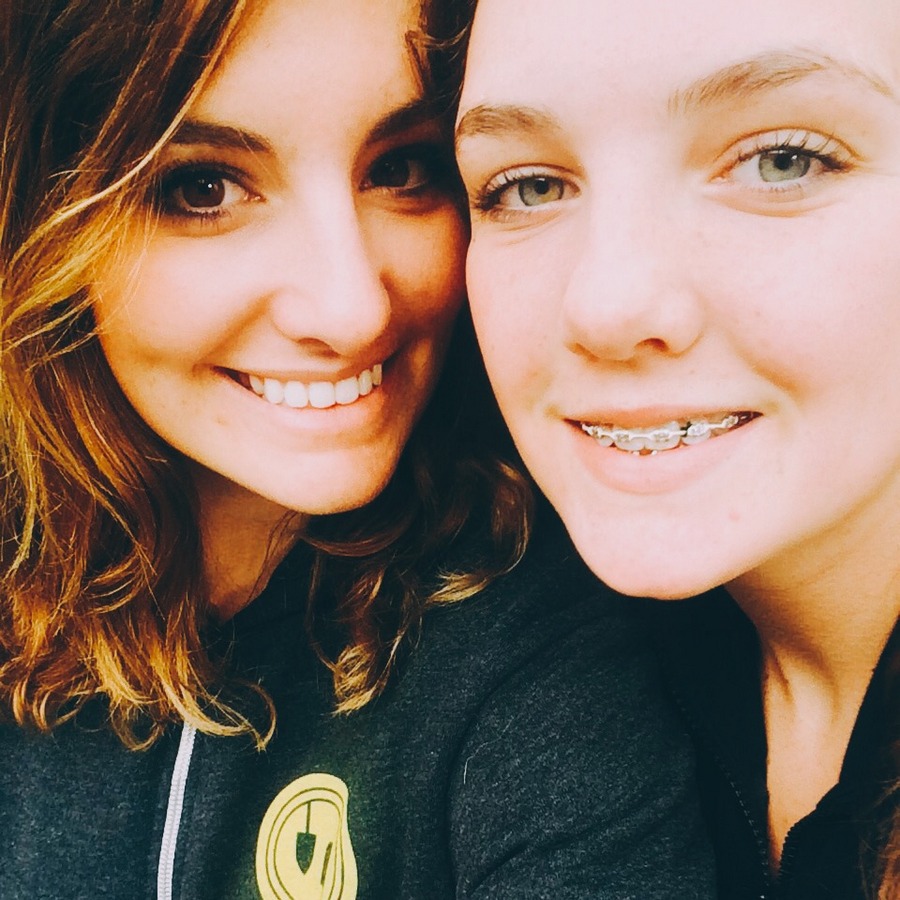 Next we beelined for Hogwarts, which houses the best ride in the park, Harry Potter and the Forbidden Journey. During the ride we tried not to vomit as we encountered everything from Dumbledore’s office to giant spiders in the Forbidden Forest. 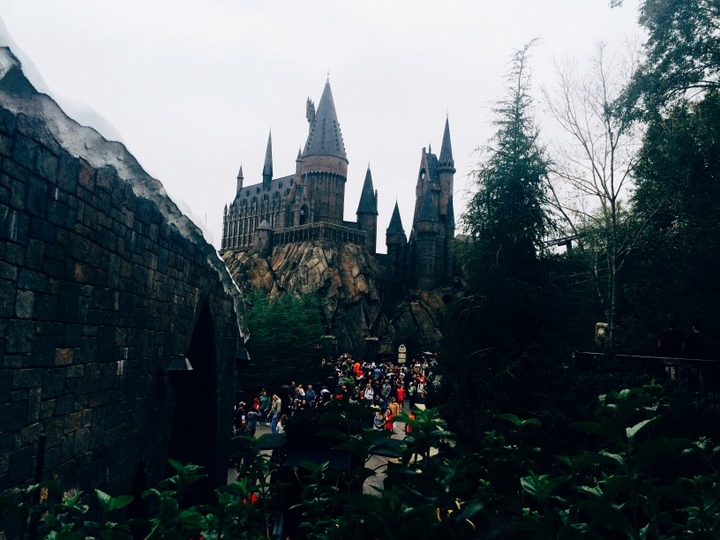 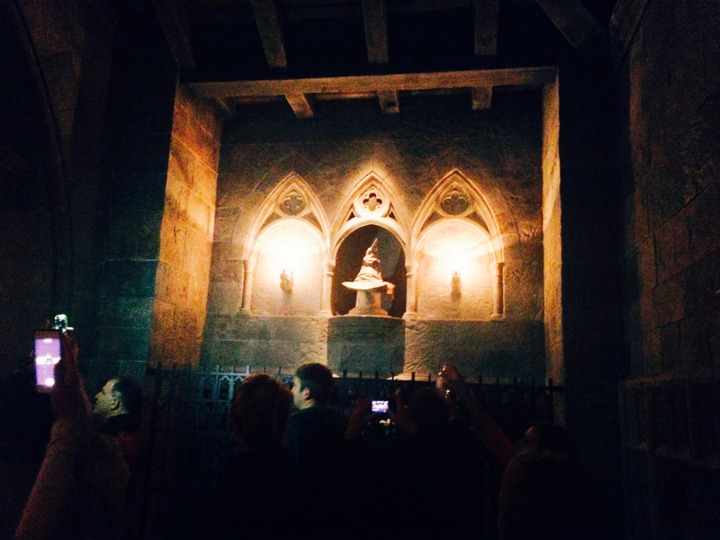 The sorting hat talks while you wait in line. So great.

Before leaving Hogsmeade we stopped at the Three Broomsticks for a pretty mediocre lunch, and then headed for Diagon Alley.

Diagon Alley was equally as impressive as Hogsmeade: a labyrinth of dark, narrow alleys, capped with giant, fire-breathing dragon. 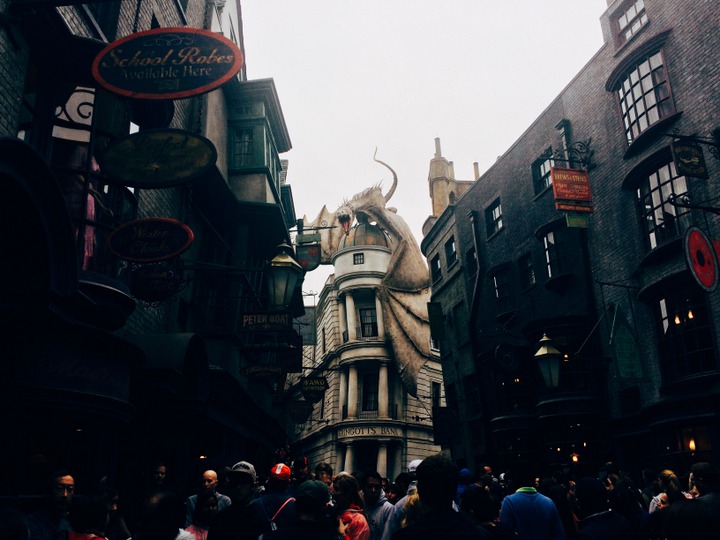 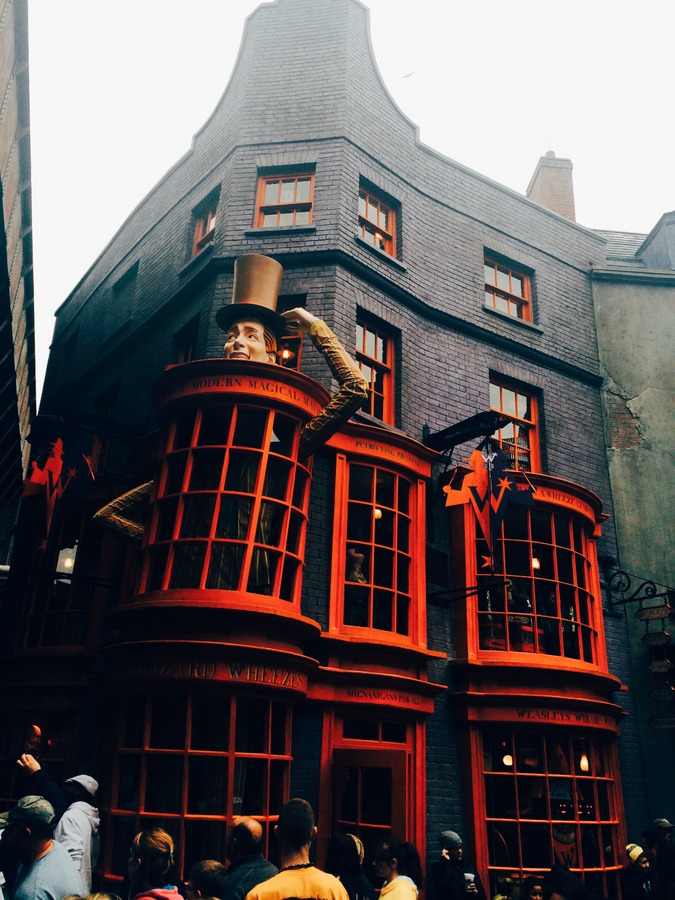 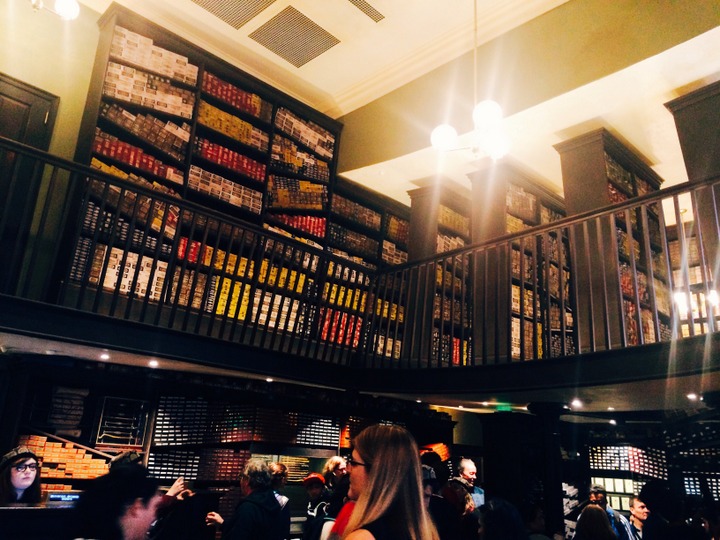 Ollivanders Wand Shop, where wands cost $40 plus dollars. I was surprised to see a lot of people buying them- quoi?

The absolute surprise of the day was Florean Fortescue’s Ice Cream Parlour. First of all, the old-fashioned, baby pink interior was adorable, and secondly the ice cream was gourmet. And y’all know I don’t use that word that lightly. 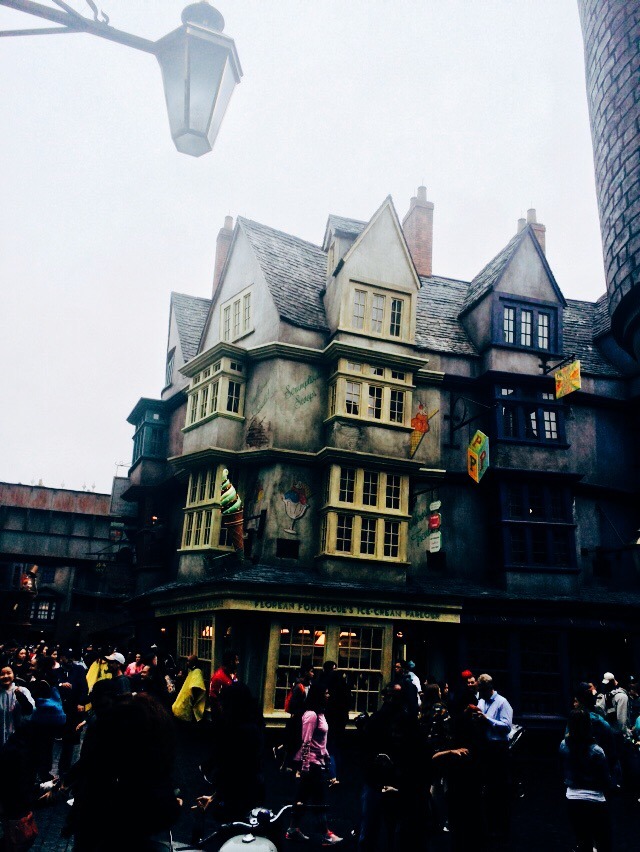 I adored my salted caramel blondie cone, and my sister lapped up her sticky toffee pudding in a cup. Unfortunately I didn’t get to taste the other inventive and seemingly delicious flavors: Earl Grey and lavender, clotted cream, chocolate chili and strawberry and peanut butter.

Can Florean Fortescue’s please be a national franchise? I’d be so down.

After we demolished our ice cream cones my sister dragged me out of Harry Potter World to see some parts of Universal Studios. Having seen almost everything, I begrudgingly obliged her.

Have you ever visited the Wizarding World of Harry Potter? Would you?

40 thoughts on “Nerding Out at Harry Potter World”