This spring I attended a Yoga Teacher Training in India with my good friend McCall. Upon arriving in Rishikesh we took an ascetic wellness pledge. For the next 30 days we were to abstain from the following: meat, alcohol, coffee, sex, social media, make-up, body-hate, soda, complaining, swearing, smoking and worrying.

Not only that, but we would practice the following daily: flossing, sleeping for eight hours, hydrating,  praying before bed and waking up at 6 a.m. to run. We would practice self-control (Sanskrit- yama) and maintain an aura of positivity. 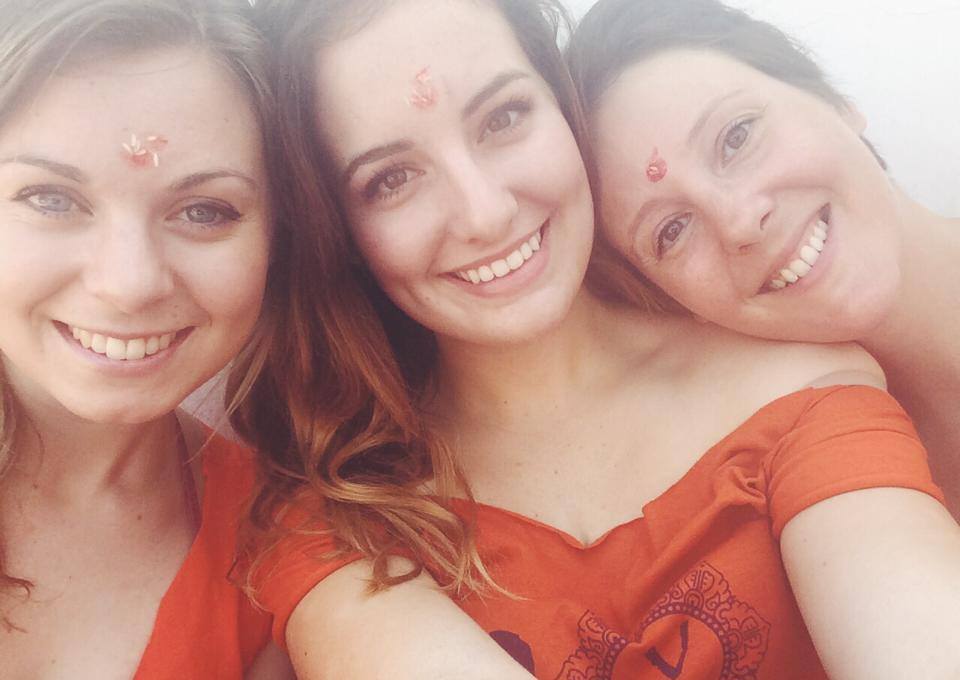 On graduation day when the pledge was over! Hence the make-up.

Honestly, quite well. I 100% abstained from meat, alcohol, coffee, sex, make-up, soda and smoking, and I mostly abstained from body-hate, complaining and swearing.

What did I not do well on?

While I refrained from worrying aloud, my mind was an anxiety-ridden chatterbox that wouldn’t leave me alone. A few pledges completed fell to the wayside (sorry, flossing), while others we abandoned midway through (running, due to the macaque attack). I also failed to give up social media entirely; I wanted to stay in touch with friends as well as post updates for the blog. And okay fine, frivolous social media usage is one of my vices.

But overall I drank tons of water, slept eight hours a night, practiced four hours of yoga a day, read dozens of books, drank fresh-squeezed juice and behaved more or less like a yoga-obsessed nun.

Here’s what I learned from the experience:

Tough love hurts, but it helps.

I’m a huge fan of tough love. Which is why I tried to have a thick skin when my fellow students (lovingly) gave me critiques such as, “You’re breathing like a basset hound”, “You slouch too much”, “You need to be more patient in your yoga practice.”

As a result? I stood up straighter, learned to breath properly and was easier on myself in class. Tough love works.

When you vocalize a negative thought, you internalize it.

Due to our no-complaining pledge, I wasn’t able to vocalize my worries or paranoias. Because I couldn’t ask a friend, “Um, so do you think x was being rude to me at lunch?” I let go of the imagined snub much more easily.

And because I couldn’t vocalize deeper insecurities like, “Do you think I’m bad at yoga?”, the insecurity didn’t manifest and I kept working hard.

I’m not cut out for a vegetarian diet.

I had an idea of how a vegetarian diet would make me feel: clean, light, nearly transcendent. Unfortunately, I felt none of these things. I had less energy and bruised like a peach, and often found myself fantasizing about burgers.

But one plus is that giving up meat for a month gave me so much admiration for vegetarians. You guys are seriously rockstars.

Correcting your posture sucks at first.

For years I didn’t stand up straight. Having a big bust as a teenager caused me to slouch, and since then I’ve had chronic pain in my neck and shoulders.

The first few weeks of standing up straight were painful. I had to remind myself every moment to keep my spine straight, and it hurt to sit cross-legged as the muscles in my upper back were so weak from disuse. (Meditation was hell at first.)

But eventually standing up straight became (almost) second-nature, and the chronic pain went away! And it turns out you look worlds thinner and more confident when you have good posture.

Giving up coffee made me sleepy at first.

For the first week of Yoga Teacher Training I fell asleep in our academic classes frequently due to both jetlag and caffeine withdrawal. I hadn’t realized how thoroughly addicted to caffeine I was until I gave it up!

But after a few weeks I began to feel alert in the mornings even without coffee. (I’m sad to report that I have since relapsed.) 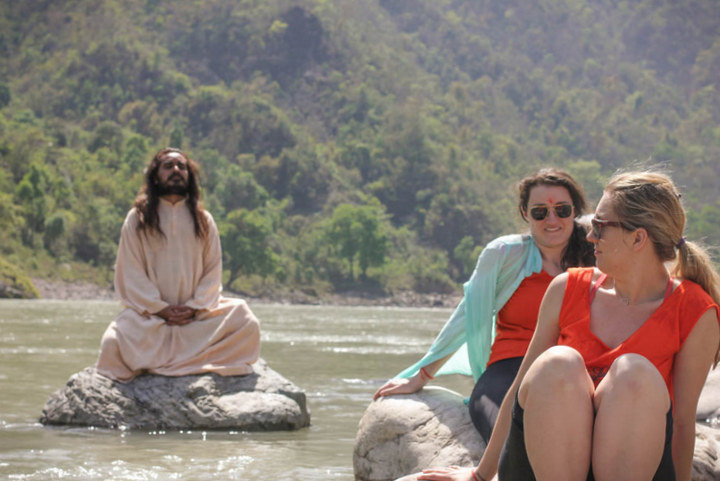 My hilarious and lovable meditation teacher, Swami Ji, meditating on a rock in the Ganges. My lethargic tendencies prompted him to nickname me, “Sluggish baby.” And when he read my palm he discerned I was intelligent, and said, “Ah yes, sluggish people often have good minds.”

I care way too much about other people’s opinions.

Halfway through training a friend pointed out to me that I have a bad habit of asking for reassurance. For example, I say, “Wow, it’s so hot out.” And if no one agrees I say, “Don’t you guys think it’s hot too?” (P.S. I have since nixed this obnoxious habit.)

Yoga Teacher Training taught me I care way too much about other people’s opinions in terms of small things, but also big things. I’ve learned that if you were to follow everyone’s advice you would be paralyzed by indecision because their advice would contradict one another’s. So it’s best to take the advice of others with a grain of salt, and ultimately rely on yourself to make decisions.

I am way too hard on myself and it gets in the way of my progress.

I realized during Yoga Teacher Training that I have a complex and fear that I’m a lazy, pleasure-seeking person. While many of my accomplishments would point to the contrary, I carry around the idea, especially in regard to physical activities, that I’m lazy.

This self-doubt doesn’t help me; rather it hinders my progress because instead of focusing on the task at hand, say, a challenging yoga position, I berate myself for not being flexible and strong enough.

While being too hard on myself is still a problem, I’ve tried to learn to forgive myself and treat myself with the same compassion I would treat anyone else. Because self-doubt gets you approximately nowhere, ever.

Gratitude is the enemy of anxiety.

This is a lesson I’ve learned time and time again; gratitude is the enemy of anxiety. For me, anxiety goes like this: first I compare myself to others, then I worry why I don’t have a perfect body/Ivy League diploma/highly lucrative blog, proceed to feel inadequate, wonder what I’m doing with my life, retrace my past to see where I went wrong and ultimately declare, “Well, I’ve already messed my life so badly that I’ll never be able to remedy my mistakes. I have left nothing to live for.”

The best way I’ve found to combat anxiety (along with drinking a jug of water, spending time in nature, going for a run and laughing) is practicing gratitude for what I do have, and realizing how lucky I am.

So each night before bed McCall and I each came up with three things we were grateful for, from the opportunity to come to India to the fact that we had electricity that morning and we were able to toast our bread.

(One of the funnier gratitudes was when McCall unironically stated she was grateful to have both running water and electricity in the same day. Lolz.)

I don’t want to be perfect.

Personally, I feel society (and Pinterest) pressure us to be this idealized, near-perfect woman. This woman has rippling abs, drinks green juice, gets to bed early, Instagrams sunsets, runs, does yoga and never swears.

India taught me that I don’t want to be perfect. By the end of the month I missed IPAs and cheeseburgers and feeling pretty and talking to boys. The ascetic lifestyle, while great for a time, is dull and restrictive.

And you know what? Sometimes I swear and sometimes I’m sarcastic and sometimes I sleep in. And I’m not sorry about any of it. Because you never remember the nights you stay in and get a good night’s rest. And flawed people are entirely more interesting than perfect ones.

India taught me that I’m no monk- I will never forgo meat or coffee permanently. But I do have a few vices I aim to cut out completely like complaining, body hate and worrying. But ultimately giving up so many things taught me so much about myself and bettered me as a person- though I won’t be doing it again any time soon.

Have you ever done a similar ascetic pledge?

77 thoughts on “What I Learned from Giving Up Meat, Alcohol and Complaining in India”