If you’ve been reading this blog for more than about five minutes, you’ve probably realized that I’m not a huge adrenaline junkie. In fact many of the more daring activities I tried, like duck-hunting or surfing, I completely failed at all together.

But canyoning – an adventure activity that can be summed up as “white-water rafting without the raft”, I was hungering to finally try. So when I saw signs in Dalat, Vietnam, advertising canyoning, I signed myself up for the next truck out.

On the way to the picturesque, pine-dotted mountains around Dalat, I met my canyoning companions; three hilarious English guys who would provide comic relief and moral support in equal measure throughout the day. 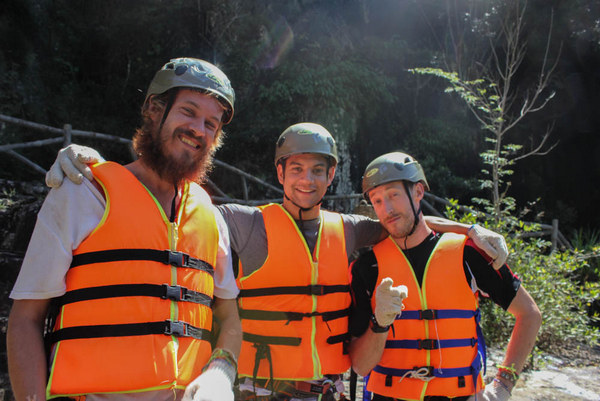 After being stylishly outfitted in harnesses, helmets, gloves and dayglow life jackets, we practiced rappelling (known to the Brits as abseiling) a few times off of a pine tree. In other words, we jumped backwards down a steep hill in frog-like hops.

Then it was time for the real thing; a thundering waterfall.

After watching two of the guys shimmy down the cliff past my view, I felt fairly confident. This wasn’t so bad, right? But once I was harnessed I froze; the idea of blindly jumping down a waterfall with only a rope to support me no longer seemed prudent.

Looking down, my stomach in knots, I yelled back up to the belayer, “I literally can’t do this.” 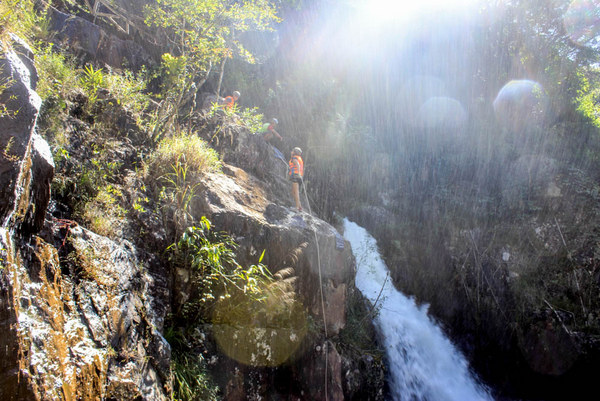 But my belayer Craig, one of the English guys, called back to me, “No, you really can!”

And although I was thiiis close to throwing in the towel, I decided to forge onward. And slowly but surely I began jumping down, trying to grip the rock with my useless, flat-soled tennis shoes. 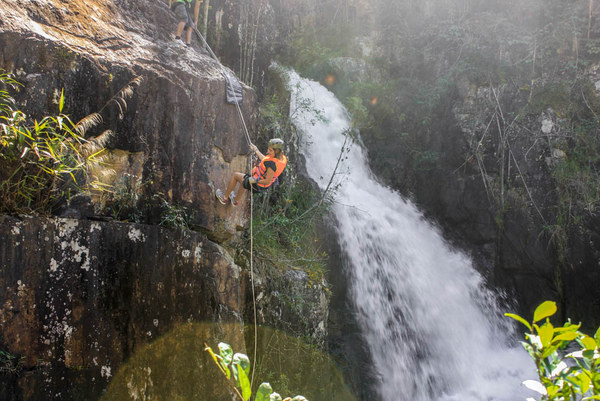 Once I reached the icy waters at the bottom my hands were trembling and I felt accomplished enough to call it a day. After all, I had just jumped down a cliff!

But the day wasn’t over yet- next up was the water slide, in which the guide sent us sailing down a small rapid headfirst. Thank god I have travel insurance.

The first waterfall and water slide were child’s play compared to our next obstacle- an 80-foot (25m) waterfall.

On the way down I had so much water pounding in my face I felt like I was being sprayed by a fire hydrant. Heeding the guide’s advice to look down, not up, in order to avoid the gushing water, I slowly jumped down the cliff. Until I slipped at one point and was flipped upside-down.

May I now interject that I was rappelling in socks. 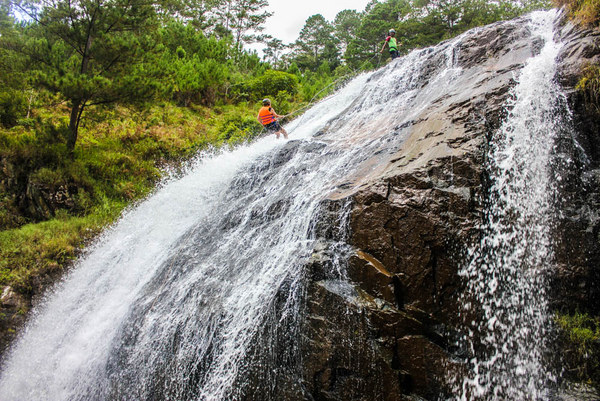 After I miraculously righted myself, I continued descending, and when the guide shouted, “JUMP!” I fell into the water like a log. It was perhaps the least graceful dismount ever. 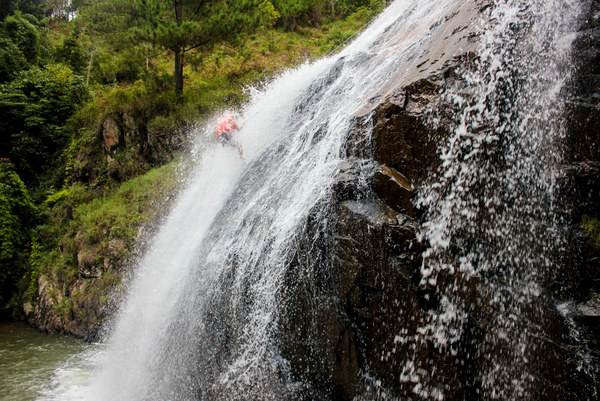 After scrambling to the shore like a drenched Pomeranian, I snapped shots of my fellow canyoners. I particularly loved the way the waterfall looked when I slowed down the shutter speed! 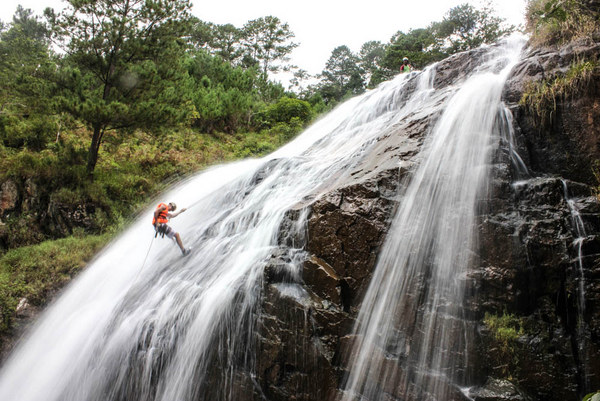 Once the entire group had descended, we enjoyed a picnic beside the waterfall: Bánh mì sandwiches filled with La vache qui rit cheese, pork pâté and vegetables, accompanied by freshly cut dragon fruit and pineapple. After I ravenously ate three whole sandwiches (canyoning really takes it out of you!) we happily munched on strawberry Oreos for dessert. 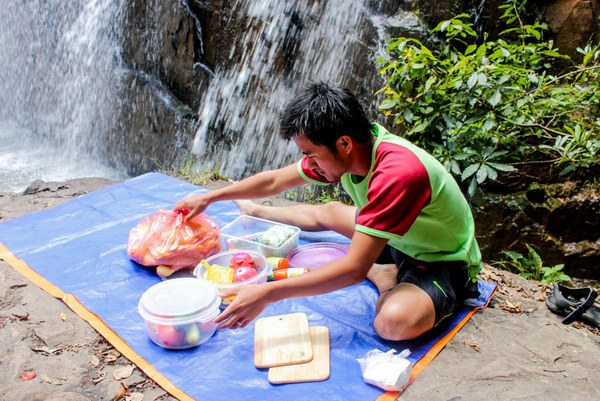 During our lunch, one of the English guys called out the elephant in the forest. “I know waterfalls are supposed to be relaxing, but really they’re just noisy.”

Bellies full, we headed to the next waterfall. The challenge? Jumping. We had the choice to leap from either seven or 11 meters. Gulp.

I almost didn’t jump (probably due to the agony I experienced cliff-diving in Greece), but then when an eight-year-old Vietnamese boy leaped off fearlessly, I begrudgingly realized I would have to jump too.

I chose the seven-meter jump, flailing myself off the rock and touching silt upon landing. (I’m so glad I didn’t heed the guide’s suggestion to dive!) And then I jumped again. 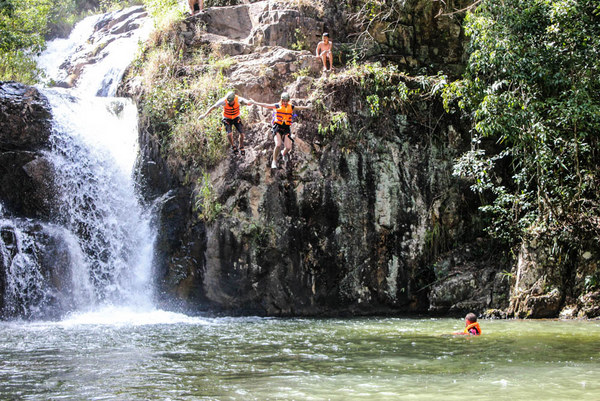 And after we swam to the shore, we heard about our final task of the day: the Washing Machine.

The Washing Machine is named as such because it shoves you in circles, mimicking a spin cycle. When I first saw the waterfall from above, I asked the guide, “Are you serious? You want me to jump down that?”

After a few paranoid questions, I (wo)manned up and began rappelling. As I rappelled down, I realized this waterfall would be different than the others; with a gap of only a few feet below me, I would have to fall carefully to dodge the jagged rocks on either side of me.

My heart racing, I let go of the rope and fell down the rushing water, procuring a few scratches and ripping my cheaply made shorts on the way. I seriously should’ve bought some better sports clothes online before canyoning!

But it wasn’t over- after the Washing Machine we began hiking back up to the car at a steep 75-degree angle. Trying not to visibly pant, I trudged 15 minutes completely uphill stopping to take pictures of the beautiful scenery.

Near cardiac arrest aside the nature was really spectacular, from the mechanical screech of cicadas to the white pines dwarfing us above.

And though canyoning was incredible, the highlight of the day may have been tobogganing. This death trap on wheels was possibly the best $3 I have ever spent. 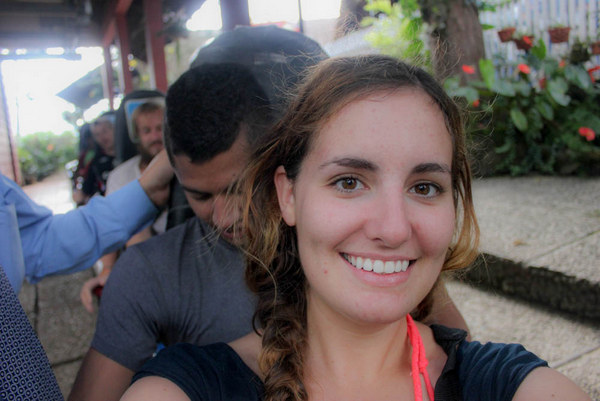 My toboggan partner almost went off the rails twice because he kept forgetting to break. I was literally laughing until my ribs hurt. I can describe it no more eloquently than it was literally the most fun thing ever. 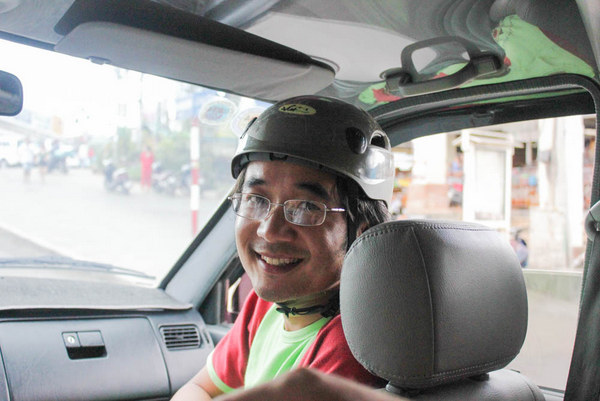 I finished the day bruised, exhausted, and absolutely content. And a little bit proud of myself. I was now a canyoning convert!

Our company, Viet Challenge, was amazing: friendly guides who gladly took photos for us, a tasty picnic, a focus on safety. Also, the head guide called one of the English guys a “tiger monkey” on account of his face which kind of made my life.

You can bring your camera- our guide provided a dry bag so it was fine to pack a dSLR.

Clothes-wise, I would recommend light clothes and possibly a change of clothes and flip flops for after. I wore my bathing suit under a t-shirt and shorts and that was fine.

Wear Tevas or tennis shoes- no flip flops. And stuff your shoes with newspaper after and let them dry out overnight- they will be soaked!

Have you ever tried canyoning? Would you want to?

Viet Challenge in no way paid or perked me. In fact they didn’t know I run a travel blog at all! Their canyoning costs $32 which is truly a steal for pick-up, drop-off, equipment, lunch and a full-day of canyoning.