Judging by what I had read about Koh Rong, I had anticipated a Robinson Carusoe-esque paradise, a white-sand island getaway from modern life. And while Koh Rong is certainly lacking in modern facilities (i.e. electricity), what I found was more of a beer-guzzling backpacker’s paradise than actual paradise.

Though I admit Koh Rong does have a certain draw- from the adorable kids and puppies playing by the pier to the dreamy, sugar-sand beaches, I see why some travelers love it. I met many expats who had been camping out there for months or even years.

The pace of island life is slow- electricity is only available for several hours a day, ice is delivered daily and the doddering wifi only became available last year. But sadly Koh Rong’s days as a slow-paced backpacker’s getaway are numbered. It is quickly being built-up as the Koh Samui of Cambodia and it’s only a matter of time before the rustic fishing villages are bulldozed to make way for Sheratons and Best Westerns.

Personally I found the island beautiful but wasn’t a fan of the amenities– it turns out I’m really not one for roughing it. (I draw the line at rat-infested.)

Here’s what I liked, disliked and downright couldn’t stand about Koh Rong. 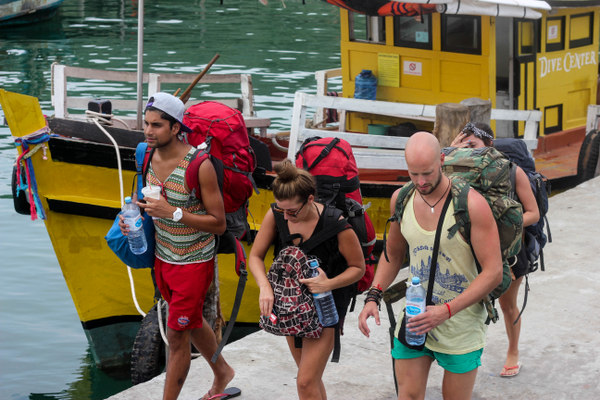 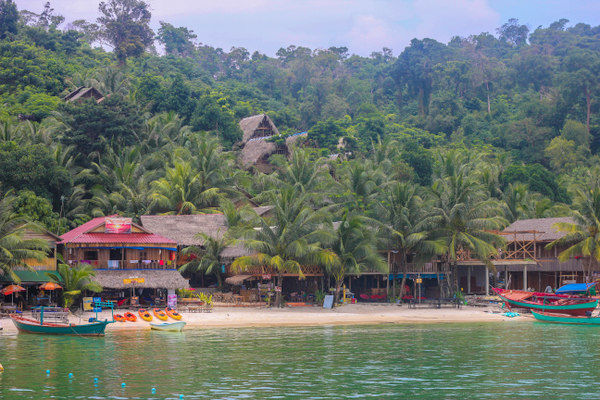 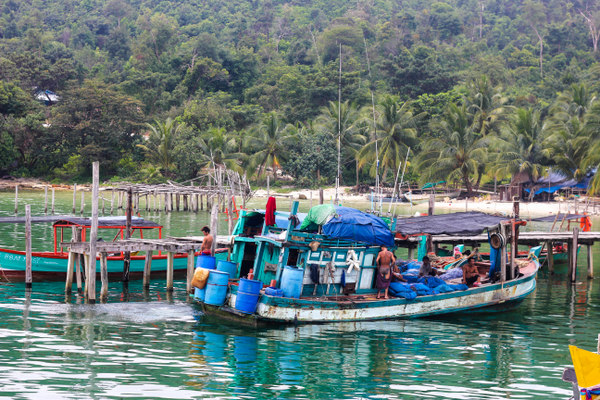 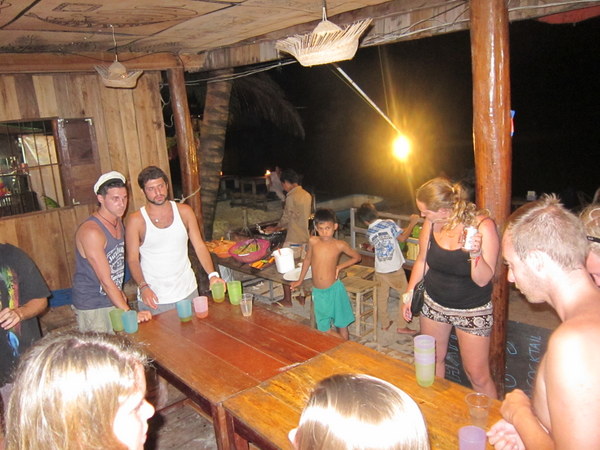 Koh Rong’s main town is just one strip of sand lined with bars and bungalows, so after only a few days you’re acquainted with almost everyone on the beach. But don’t expect Sihanoukville-style ragers- the partying on Koh Rong is more likely to take place sitting in a beach chair while the waves lap at your feet. Koh Rong does seem to attract a certain kind of backpacker- to best honest I don’t think I’ve ever smelled so much marijuana in my life.

Due to such a small community, the islanders as well as the visitors are very community-oriented. One night my travel buddies built a bonfire at the end of the beach and invited everyone on the island to come join. There’s nothing like fireside rum and cokes under a dazzling array of stars. 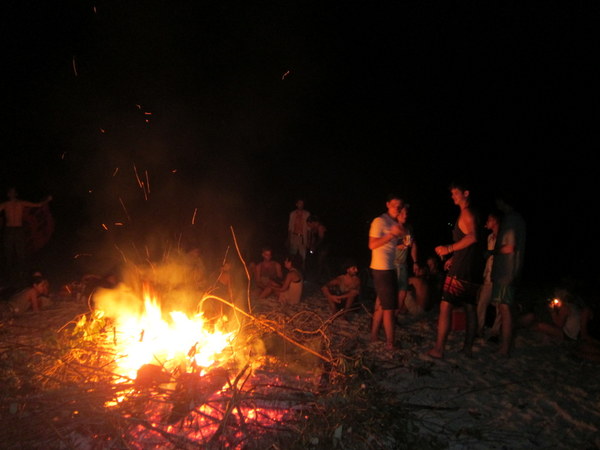 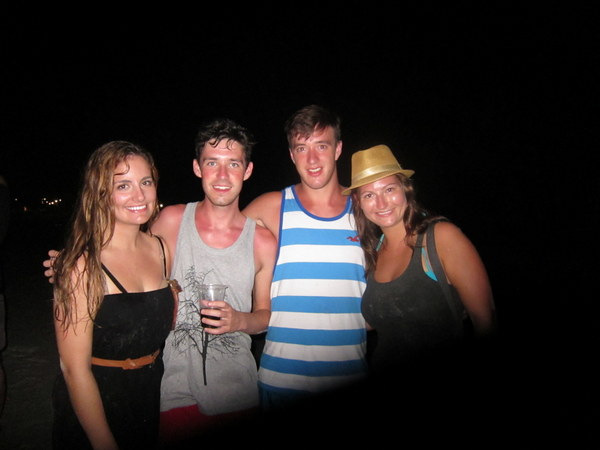 One of the inside joke on the island that the local pick-up line is, “Hey, have you seen the plankton?”

But really, have you seen it? The first time I dipped my hand into the dark water, a flurry of light followed my fingertips. I screamed out giddily, “It’s like glitter!” It’s like the stars fell down into the water. It’s magic.

And how’s this for a travel memory: swimming in the phosphorescent plankton with a new Brazilian friend singing me Portuguese lullabies. A platonic swim-sesh, mind you! 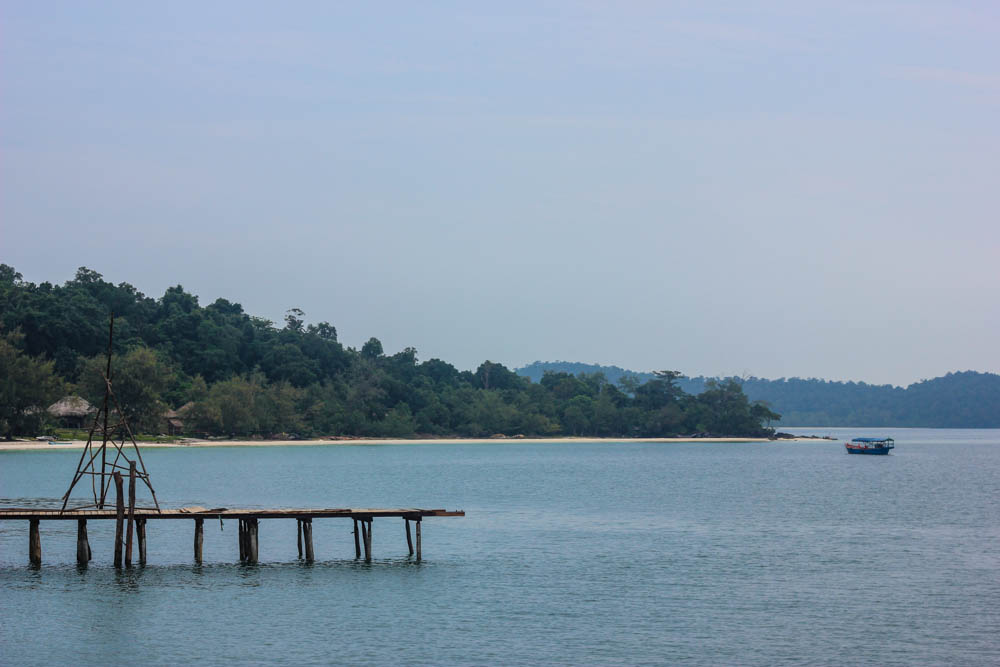 Look at that beach. Need I say more? I spent many happy hours there, taking dips in the aquamarine water and then retreating to the sand to read my Kindle and reflect on my incredibly lucky lot in life. And, there’s one more thing- the awful beach vendors of Sihanoukville are notably absent on Koh Rong. Hallelujah.

But I did take a day-long boat-trip to nearby Koh Rong Samloem (a neighboring island) and it was absolutely beautiful as well as peaceful. While it lacks the backpacker vibe of Koh Rong, it would make the perfect honeymoon spot. 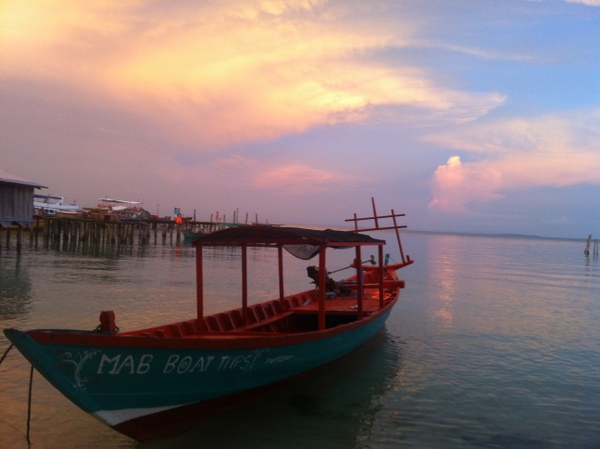 While I unfortunately never took my dSLR out on Koh Rong until I was literally leaving on the afternoon boat (I took this shot with my iPhone) the sunsets were some of the prettiest I’ve seen in Southeast Asia.

Maybe I’m spoiled, but the accommodation on the island is absolutely filthy.

On Koh Rong, a good nights sleep is basically impossible.

Between dog fights at three in the morning, raucous roosters crowing at dawn and the lack of power after around midnight (remember, no power means no fans) I don’t think I got one good night’s sleep in Koh Rong.

The first night may have been the worst. I paid $2 at Vagabond’s for a sandy hostel bunk littered with toilet paper, and was woken up by a seemingly confused Cambodian man who entered my room at 3 a.m. with a flashlight.

Next I switched to Bunna’s where I had my own bed for $7 a night. This room was debatably even worse. I will explain below, but let me give you two words of foreshadowing: rodent droppings.

Wherever you stay, there’s nothing quite like realizing when you return to your hostel at 3 p.m. that you can’t shower because you would be washing yourself in pitch blackness.

Theft is a major problem on the island- I met two English guys whose room was broken into and all of their belongings stolen out of the hotel-provided safe. While I also met several other travelers who were pick-pocketed on the beach, the main problem definitely seemed to be theft via breaking and entering the bungalows.

I could’ve dealt with the terrible wifi, the rustic rooms and even the possibility of theft, but I could not deal with the island’s rat problem. I had so many rats in my bungalow that it took me 20-30 minutes each night (and at least 5-10 minutes each morning) to clear my bed of rat droppings. At night I could hear them moving and scratching inside the walls to which I just put in my headphones.

Maybe this makes me a wimpy traveler, but I can’t sleep soundly in a bungalow with a rat infestation problem that is quite at that level. I have my limits.

Overall I have some great memories on Koh Rong. But needless to say, I don’t think I’ll be back.

Koh Rong is a $10 one-way ferry ticket from Sihanoukville (the nearest city on the mainland). There are only two ferries a day, morning and afternoon, so arrange transport with your hostel in Sihanoukville in advance.

Coco’s is the best place to stay on the island. It’s a great place to hang out, eat and work- the food’s nice, and the upstairs has beautiful views of the water as well as lots of outlets and the island’s best wifi.

Diving is available on Koh Rong, but I opted not to go – apparently the reefs are mediocre as they have been destroyed by dynamite fishing.

Make sure to purchase travel insurance before your trip to Cambodia (especially if you’re planning on riding a motorbike!). I’ve used World Nomads for years and highly recommend it.

Have you visited Koh Rong before? Does it sound like a place you would enjoy visiting or not so much?