While I may not be the sportiest/most adventurous of bloggers, I am really into tennis and used to play varsity in high school. So when a family friend visiting Paris asked me, “Do you like tennis? How would you like my extra ticket to the French Open quarterfinals?” I actually had tears in my eyes. 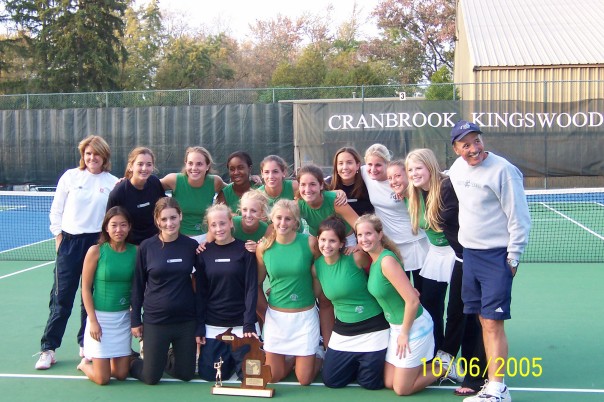 Can you spot baby tennis-playing Ashley in this picture?

As the daughter of two very skilled tennis players, I grew up watching the French Open every summer, idolizing tennis greats like Martina Hingis, Andre Agassi and the Williams sisters. But I truly never dreamed I would see the red clay of the French Open in person.

For all the non-tennis fanatics out there: the French Open is one of the four Grand Slam tournaments, which include the French Open, Wimbledon, the Australian Open and the US Open. 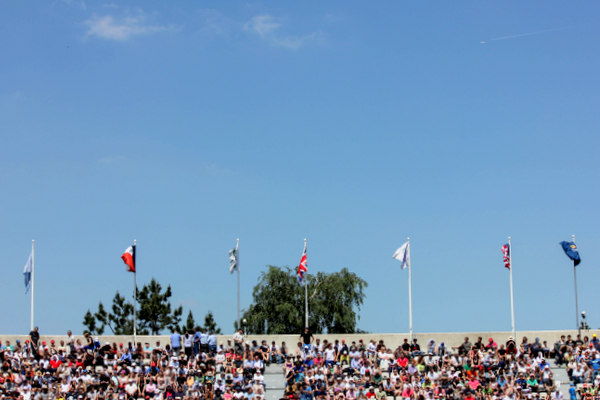 From left to right- the flags of all the countries that host Grand Slam tournaments: France, the U.K., the U.S. and Australia (not pictured). Incidentally it was the first time I noticed that these countries’ flags all share red, white and blue as common colors.

The first match was Victoria Azarenka v. Maria Kirilenko. I knew Azarenka was playing before even stepping into the arena, considering I could hear her ghoulish moan from a half-mile away. “Bah-woo!”

I had to wait for my seat as you’re only allowed to enter the stadium every two games when the players switch sides. I stood there tapping my feet like a little kid, eager to see some balls fly. I had come prepared with three camera lenses, a chilled bottle of lemon-ginger water and a generous coat of sunscreen. I was ready. 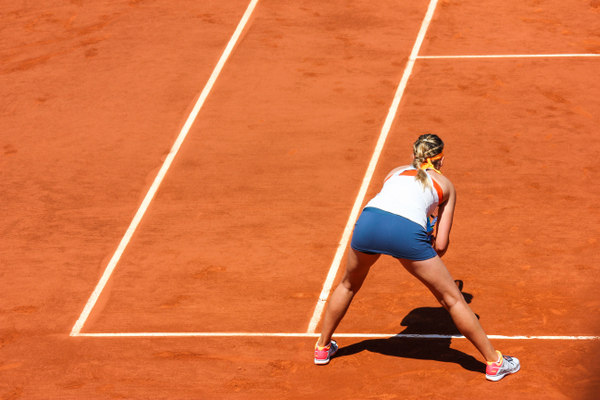 Luckily, the seat was worth the wait: tenth row, shaded and smack-dab in the middle of the stadium.

While I bought at telephoto lens before leaving for France, I had never had a good reason to put it to use. Now was the moment. I switched it to sports-mode to get a rapid-fire shots of the players in motion, as well as score some close-ups. With the aid of the telephoto lens I could see the tiniest details, from the the glint of Kirilenko’s gold watch to Azarenka’s face squinting in the sun. “Bah-woo!” 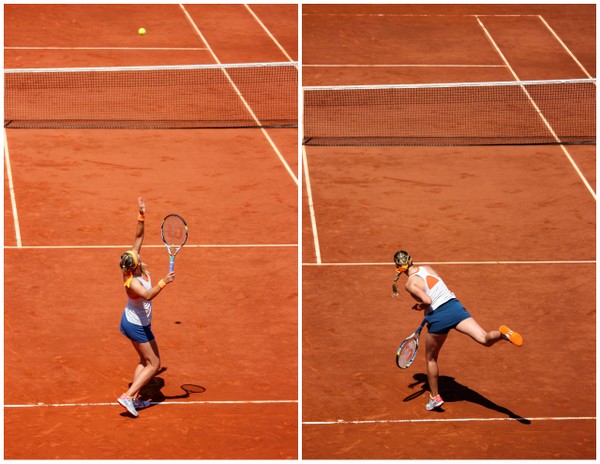 As I had predicted, watching the French Open in person was so much more fun than seeing it on TV. I loved being privy to all of the little behind-the-scenes moments: Azarenka practicing her serves between games, the young ball-boy carefully holding an umbrella over the players between games, the sound of Kirilenko’s racket hitting her shoe to knock out the red clay.

Considering the French Open is held in Paris, most of the spectators around me were French. I loved eavesdropping on their Gallic observations, “Elle est prête !” “Allez, Maria !”

When Azarenka hit an amazing overhead and Kirilenko threw her racket trying to receive it, the older lady behind me scoffed, “C’est pas bon, ca.” 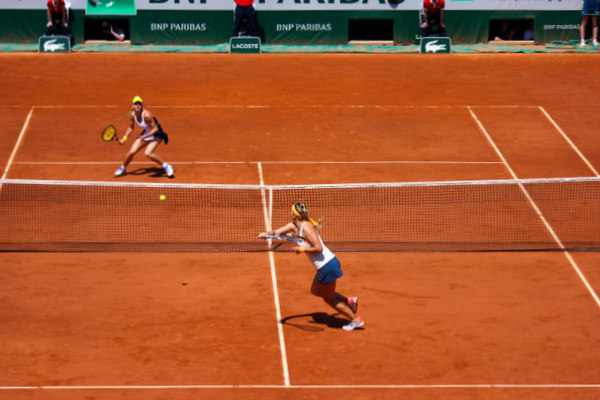 Listening to the Francophone loudspeaker was also a joy. “Quarante-treinte.” “Avantage, Mademoiselle Kirilenko.” “Égalité.” Apparently “deuce”, or 40-40, is “égalité” in French (equality). Tennis did originate in France, after all.

Azarenka won, and we watched the players “faire la bise” (kiss each other on each cheek) at the net, which I found to be a very sweet gesture.

At her post-victory interview, Azarenka revealed her love for a certain dance song.

“What do you enjoy most about being in France? What do you like about French culture?”
“I like Paris and I like that song Alors On Danse.” Me too, Azarenka, me too. 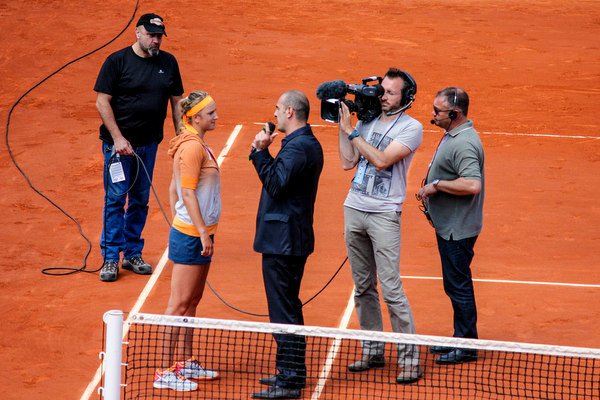 The sweaty crowds outside of the stadium reminded me of why tennis is one of the only sports I enjoy watching in person- it has a more civilized feel, with white hats, polite clapping and an ample amount of personal space. (Football games are a claustrophobic person’s worse nightmare, fyi.) 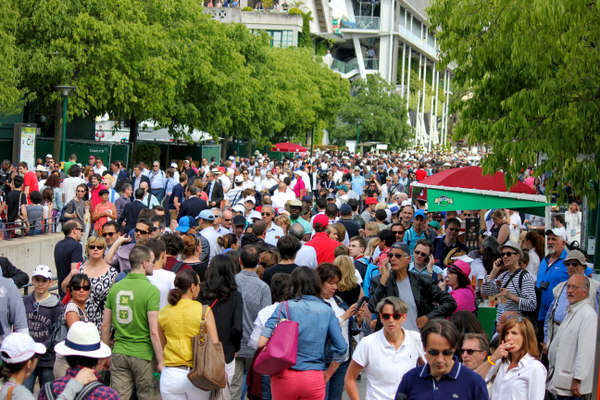 For the second match, my friend and I decided to switch tickets, so I made my way to the Phillipe Chartrier stadium for the men’s match: Rafael Nadal v. Stanislas Wawrinka. 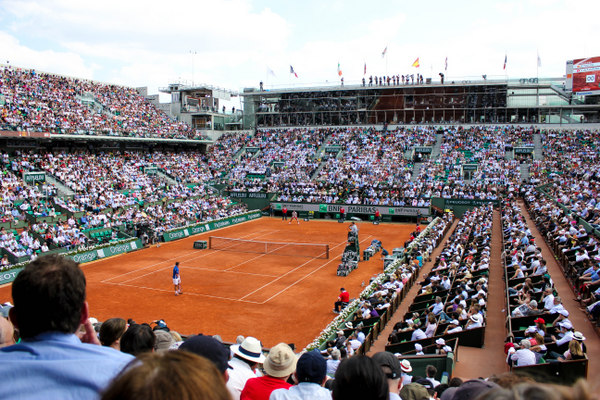 I’ll be the first to admit that Rafa is my favorite tennis player. Not only is he a fellow southpaw (lefty pride!), I studied on his home island of Mallorca, where my host-mom was actually friends with his grandparents. Also, boy is really, really fine. 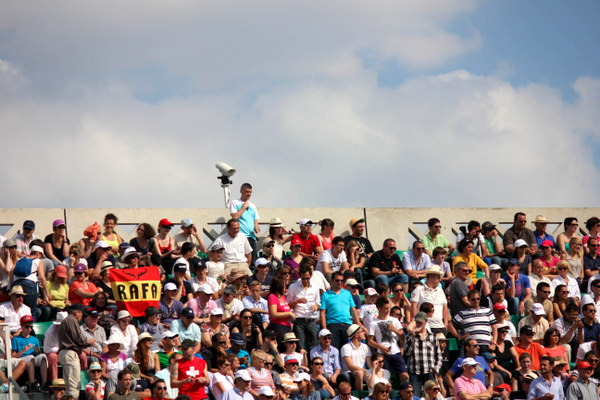 Watching Rafa play tennis is truly like watching a bullfighter. I’ve truly never encountered a human being with so much testosterone. I thought at any moment he was about to leap over the net and strangle his opponent. 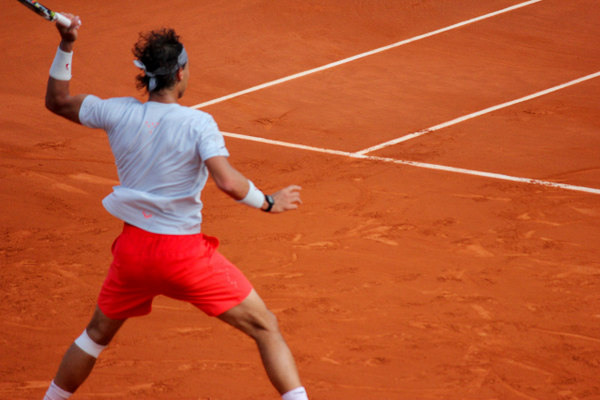 But truly, the real joy of watching Rafa is the drama: Rafa sprinting to the net to hit an artistically crafted drop shot, serving up aces, blasting off a left-handed forehand that I can only describe as “gorgeous.” 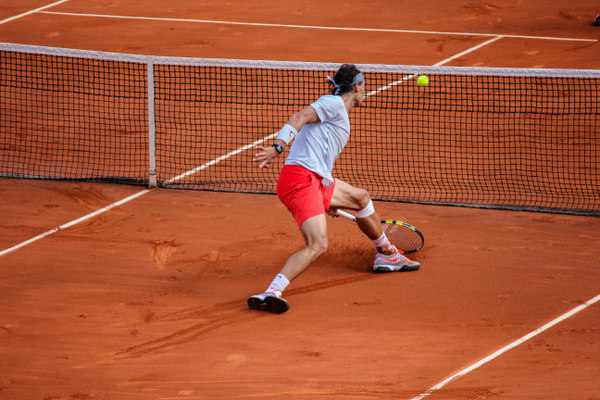 Rafa is a man of feverish fans- at the match his supporters shouted words of encouragement in a myriad of languages. “Rafa, es tuyo!” “Allez, Rafa!” “You got this, Rafa!” (The last one may have been me.) 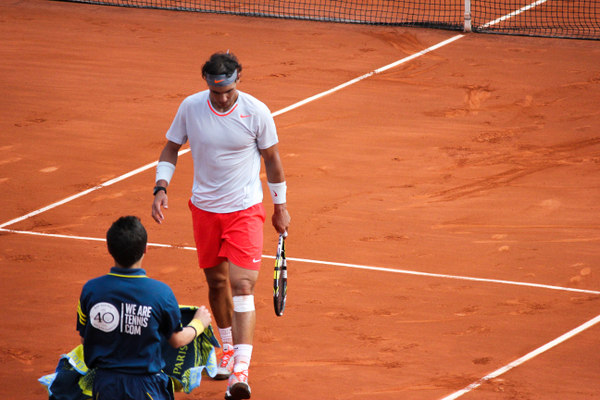 One thing that mildly baffled me was his bizarre, borderline obsessive compulsive ritual before each point: tucking his hair behind his ears and then unceremoniously picking a wedgie. His fans don’t mind though, apparently. 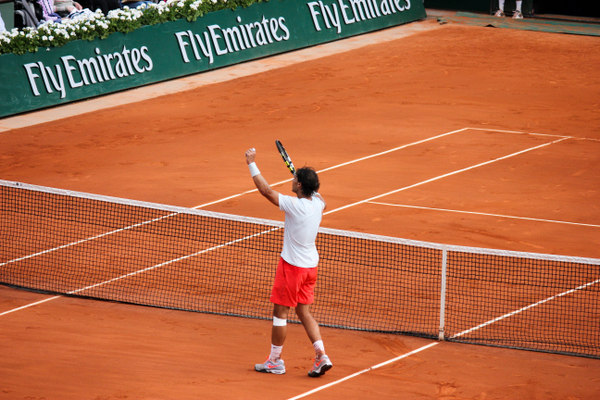 I left that day feeling blissed out, lightly sunburnt and inspired to play much more tennis. And google Rafa, perhaps.

Have you ever watched the French Open or other professional tennis matches?

Thank you so much Joe for offering me the ticket and making one of my lifelong dreams come true, I seriously can’t thank you enough!

10 thoughts on “The French Open for Beginners”