But to get to the top? One must endured 509 lung-burning, steep, positively medieval steps packed to the gills with other tourists. 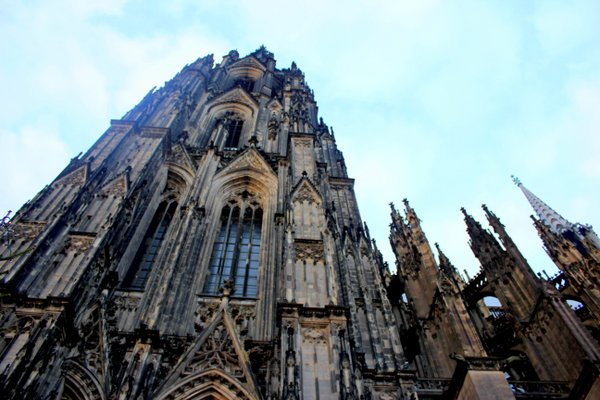 At first I thought, “No big deal, I used to own the Stairmaster in college.”

But by about step 100, I was muttering, “Fake it ’til you make it,” under labored breath. At least I was burning off some latkes from the night before.

When we finally made it the top, we were able to catch our breath long enough to enjoy the festive vistas of the snow-covered city; from the icy Rhine River to the cheery red-tented Christmas markets. 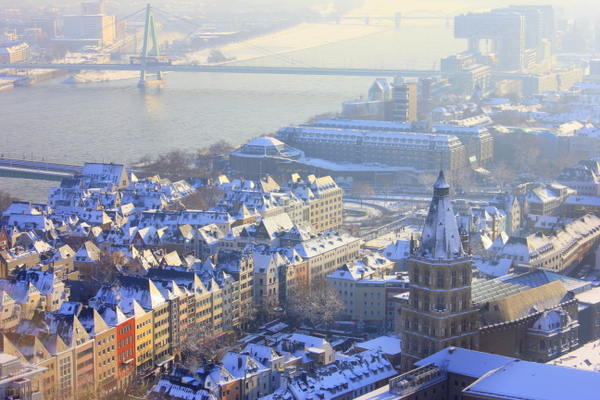 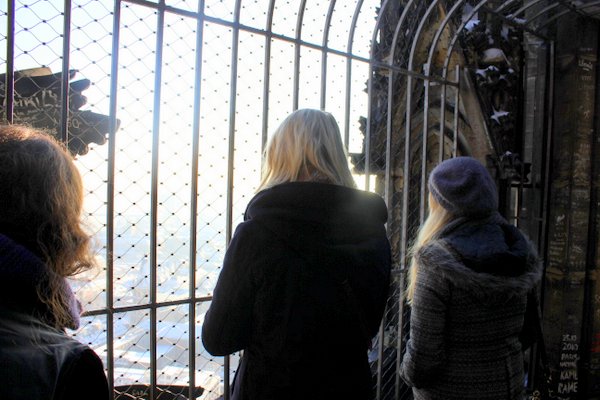 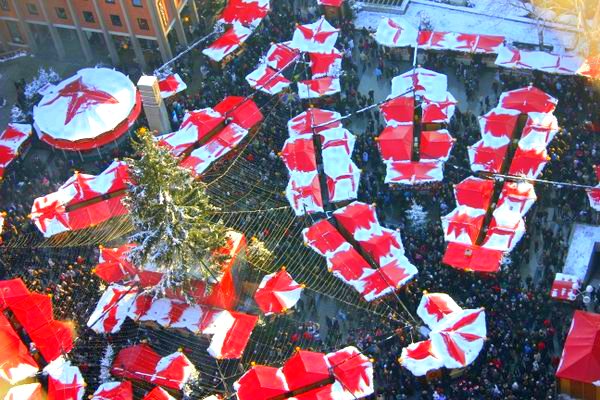 I made this journey to the top of the Kölner Dom with Marina, my Couchsurfing host from Corfu, as well as Julika, a fellow travel blogger/history buff from Sateless Suitcase who is studying to become an art historian. (Might I just add that I will never visit a medieval church sans the company of a well-trained and personable art historian ever again?) 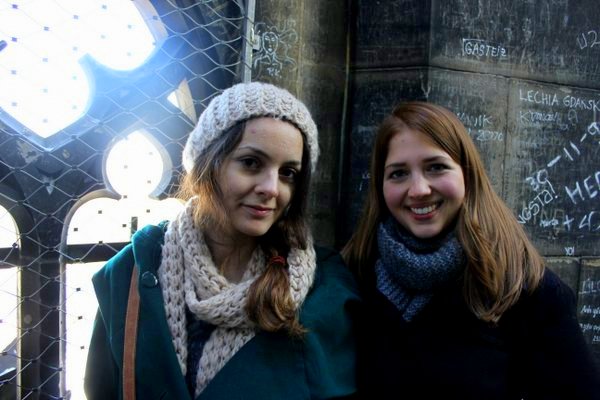 Being as this was a girl’s only trip to the top of the cathedral, we made sure to take lots of artsy portraits. 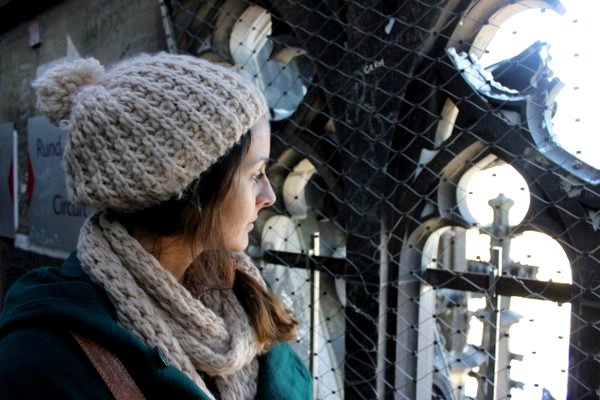 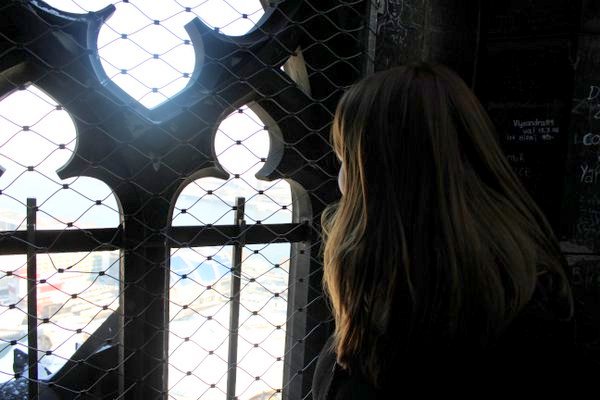 Due to Julika’s impressive knowledge of the cathedral, we learned lots of fun facts we would have never learned otherwise. The white tower at right was built in the 1950s (to great controversy in the art world) after the Allied Forces bombed Cologne during World War II. 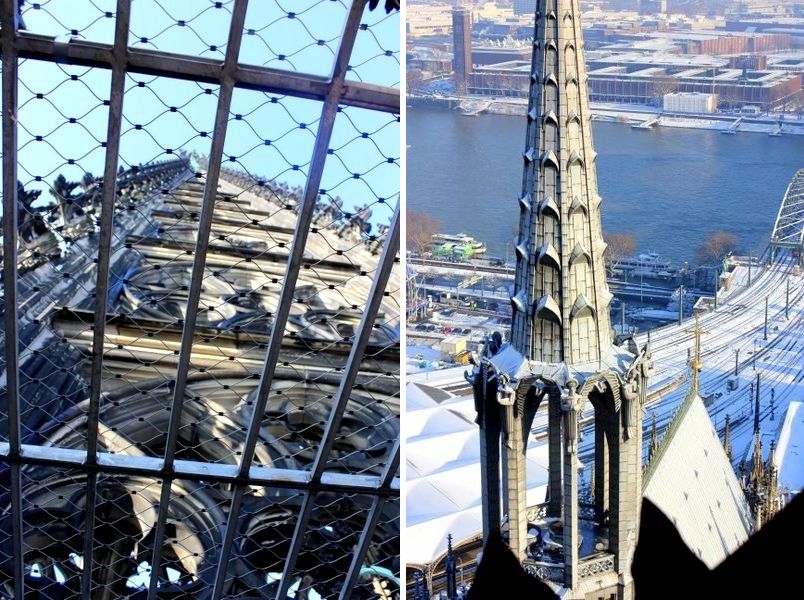 Once Julika mentioned that, I noticed that the tower did stick out garishly from the rest of the medieval architecture.

Then we made our way inside to see the cathedral’s enormous the bell, which clanged LOUDLY right next to our poor, unprepared ears. 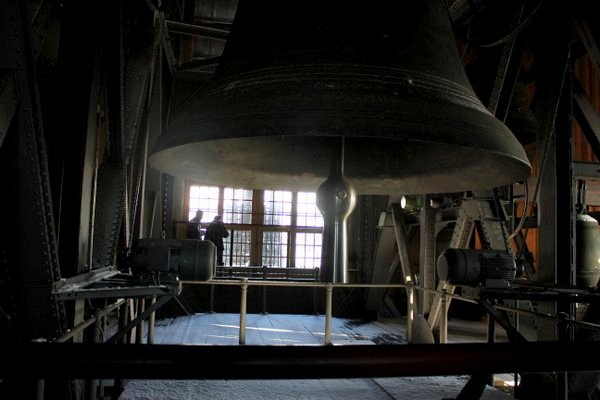 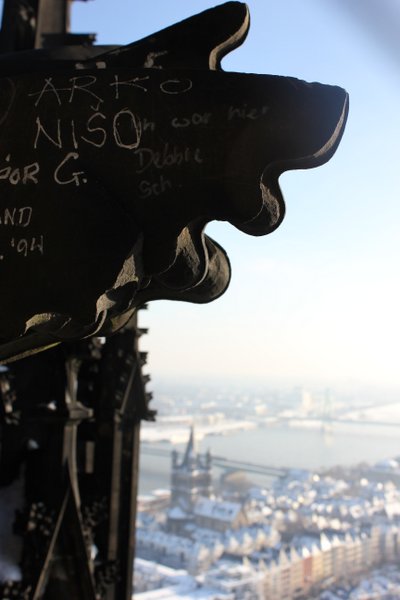 Cologne’s cathedral took more than 700 years to build, and is in fact the largest Gothic cathedral in Northern Europe (it has room for a congregation of 20,000!). And it was built well; during World War II the cathedral suffered hits from seventy bombs but stood tall while the rest of Cologne was flattened. 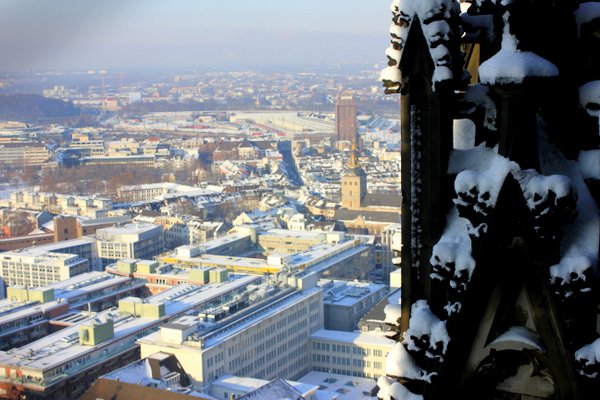 Later we explored the interior of the cathedral (which I have no pictures of because I am still using my camera’s built-in flash.)

“This cathedral is considered very special because it has five naves,” said Julika. Um, English may be my first language, but uh… what’s a nave? (Here’s the definition in case you were wondering; I’m still not entirely certain.)

So if you’re ever in Cologne, definitely visit the Dom Cologne cathedral– your shapely thighs will thank you later.

What is the coolest cathedral that you’ve seen in Europe… or beyond?

If you enjoyed this post please consider sharing it! Also, I’d love to keep you updated on my adventures in baguette-land and beyond, so please subscribe to Ashley Abroad via RSS or by email in the sidebar.