Although I went to Coachella three months ago, I’ve been struggling to describe my first-time Coachella experience ever since. It was a whirlwind.

But all in all, Coachella was one of the most fun weekends of my life, and turned me into a full-blown festival addict.

But there are a few things I would have done differently. (Namely packing. Packing did not go well.) To help you guys with your first time to Coachella, I wanted to break down everything I navigated as a Coachella first timer: the festival layout, schedule, costs, and the emotional highs and lows. 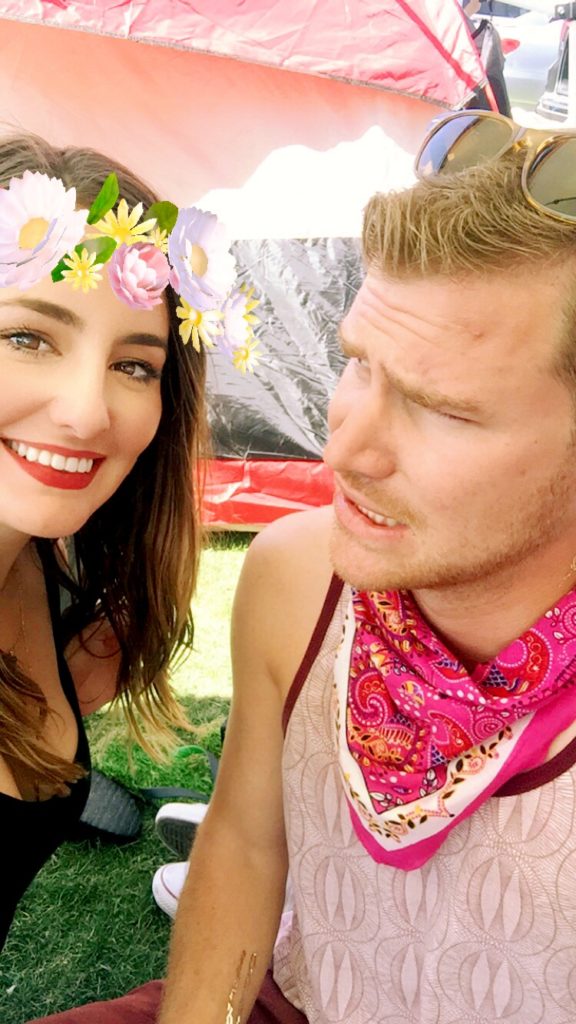 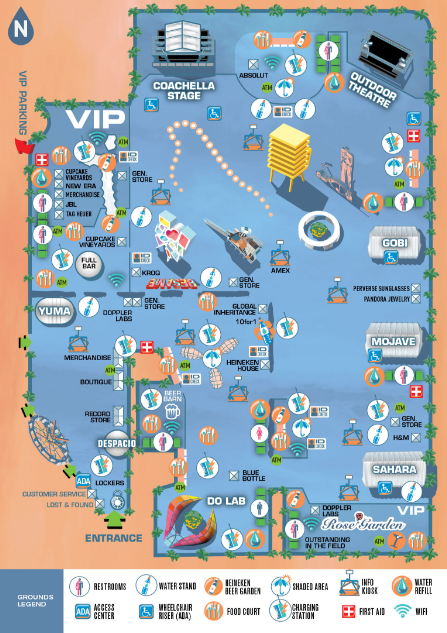 To enter the festival grounds, you scan your wristband at the gates next to the Ferris Wheel. Once you enter, there are myriad things to do: you can browse boutiques, eateries, and art installations. There’s even a huge craft beer garden!

If you’re camping, the campground is to the left of the Ferris Wheel on the map above. Depending on where you park the first day, it can take from five to 30+ minutes to reach the festival grounds.

The main shows take place across two stages and three tents. Each tent specializes in a different type of music. My favorite tent? Definitely the Sahara tent, where the EDM shows take place. At Coachella I was like a moth to the EDM flame.

The Lowdown on Camping

When my friend Mike and I drove up to the campsite, I was shocked by how beautiful the grounds were. I had pictured a desert, not luscious green grass. It turns out the Coachella campgrounds are beautiful, backed by the quintessential Coachella scenery of palm trees and the Ferris Wheel.

On Thursday, the first day of the festival, you park at the campground. Parking spots at Coachella are first-come, first-serve, so arrive early. I recommend arriving at 11 a.m. to get a parking spot as close as possible to the festival grounds.

Some campsites consist of enormous groups of people (20+) and are incredibly tricked out. We hung out with a giant Khmer group that had an IV and hospital bed set up.

The worst part of camping? The Porta Potties. By day two they were filthy, and got even worse due to the hot sun. Gag.

Surprisingly, the showers were immaculate – though expect to wait at least 30 minutes in line. 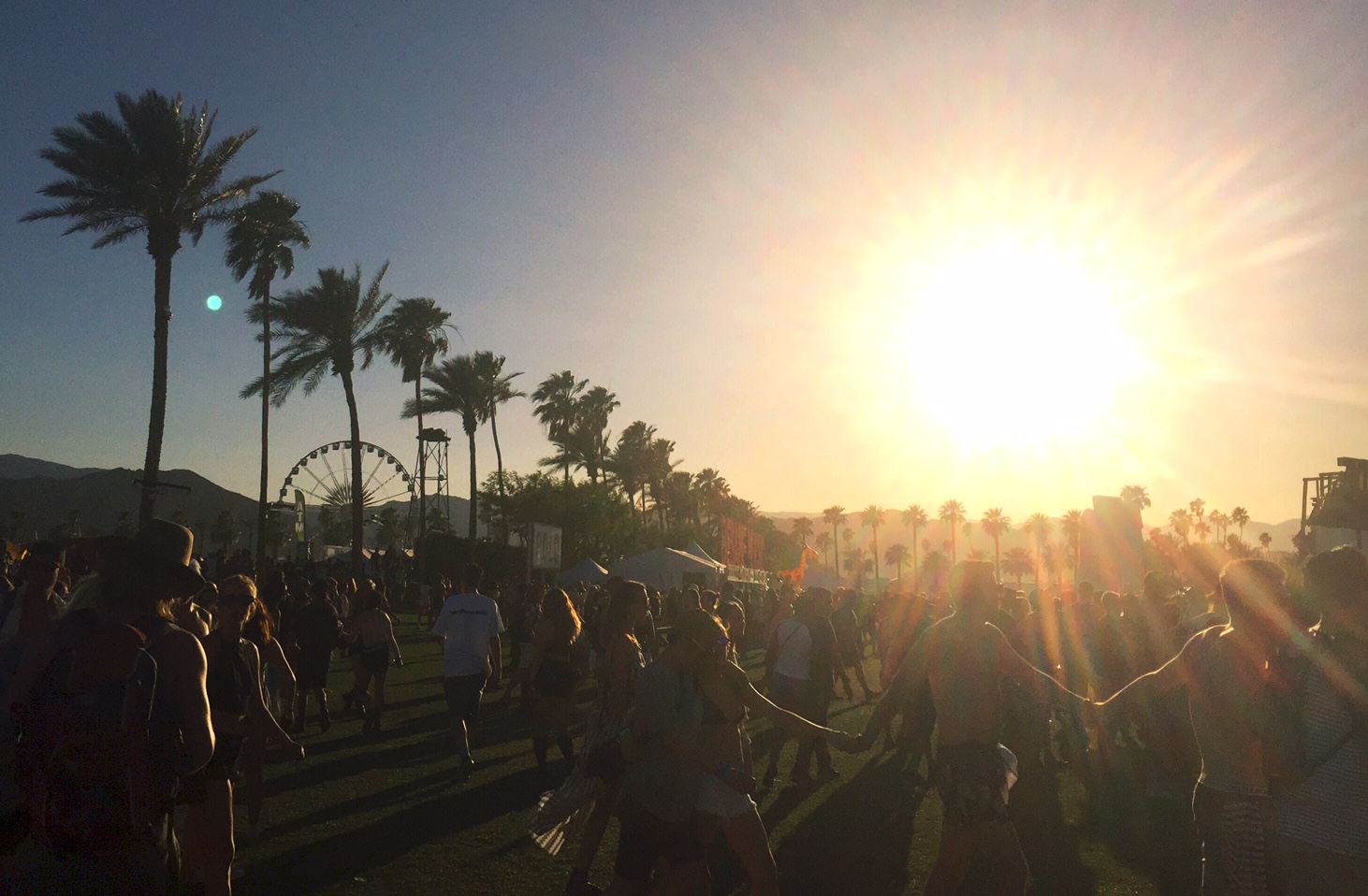 Our Coachella schedule went as follows:

One night I was dancing at midnight and realized I hadn’t eaten since 9 a.m. (Albeit craft beer is quite filling). Coachella truly is so much fun you forget about everything but the music.

There were so many shows I loved at Coachella that it’s hard to pick a favorite.

Purity Ring blew my mind. I loved the lights and the colors, and their music was so intense live.

Matoma had the most amazing setup, with all of the flying boxes below. Chainsmokers was also incredible, and got bonus points for bringing out THIRD EYE BLIND who played “Jumper”. 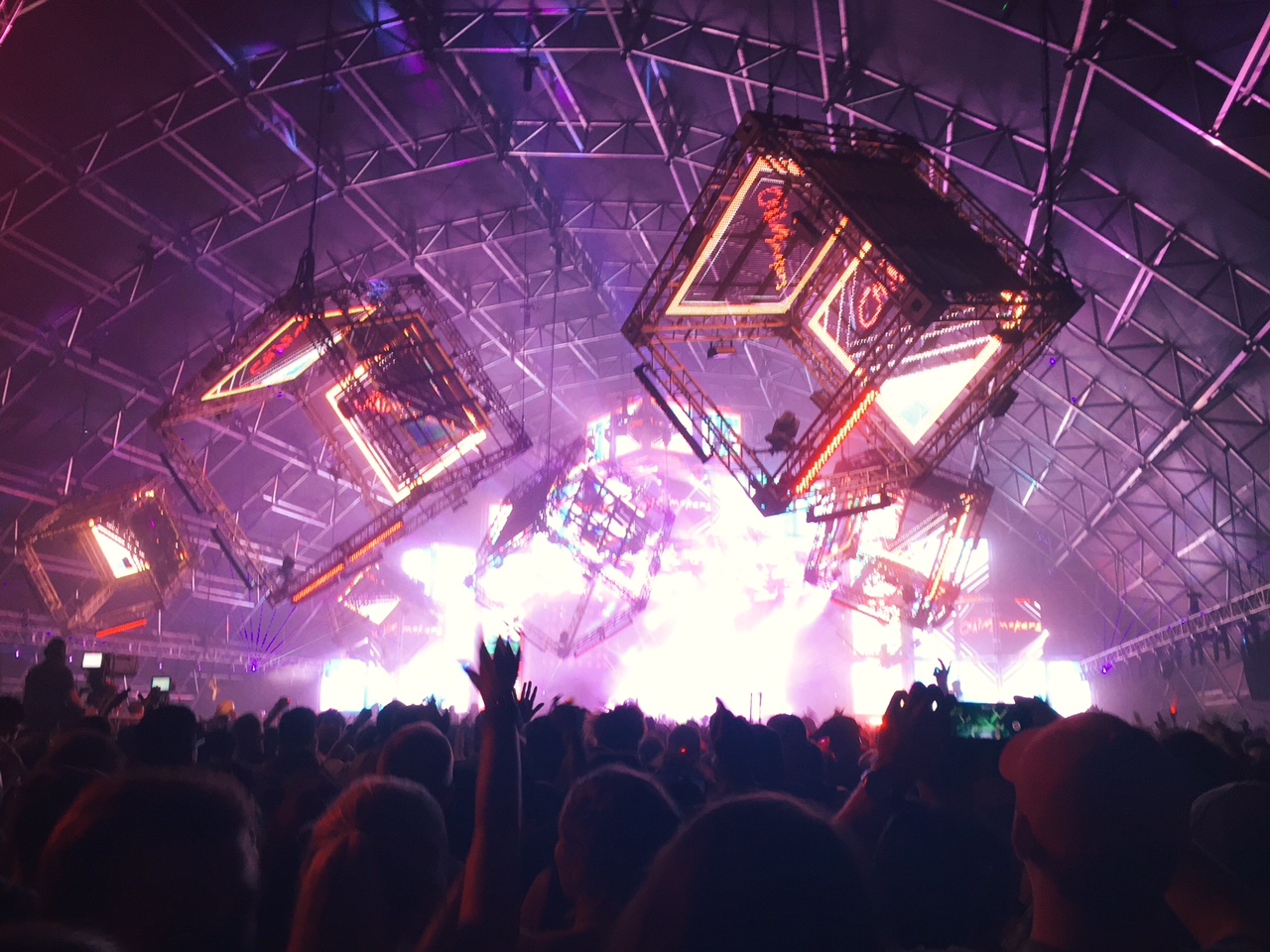 Sia was unreal – her set was like performance art. And though Jack Ü was extremely crowded, I will never forget frenetically dancing to “Take Ü There”, the crowd pulsating with energy.

Chvrches was also amazing – I cried during “Gun” (cue monkey covering its eyes in shame emoji). Chvrches played on the main stage at Golden Hour, known as one of the prime sets of Coachella. The sun setting over the palm trees while listening to “Leave a Trace”? Magic. 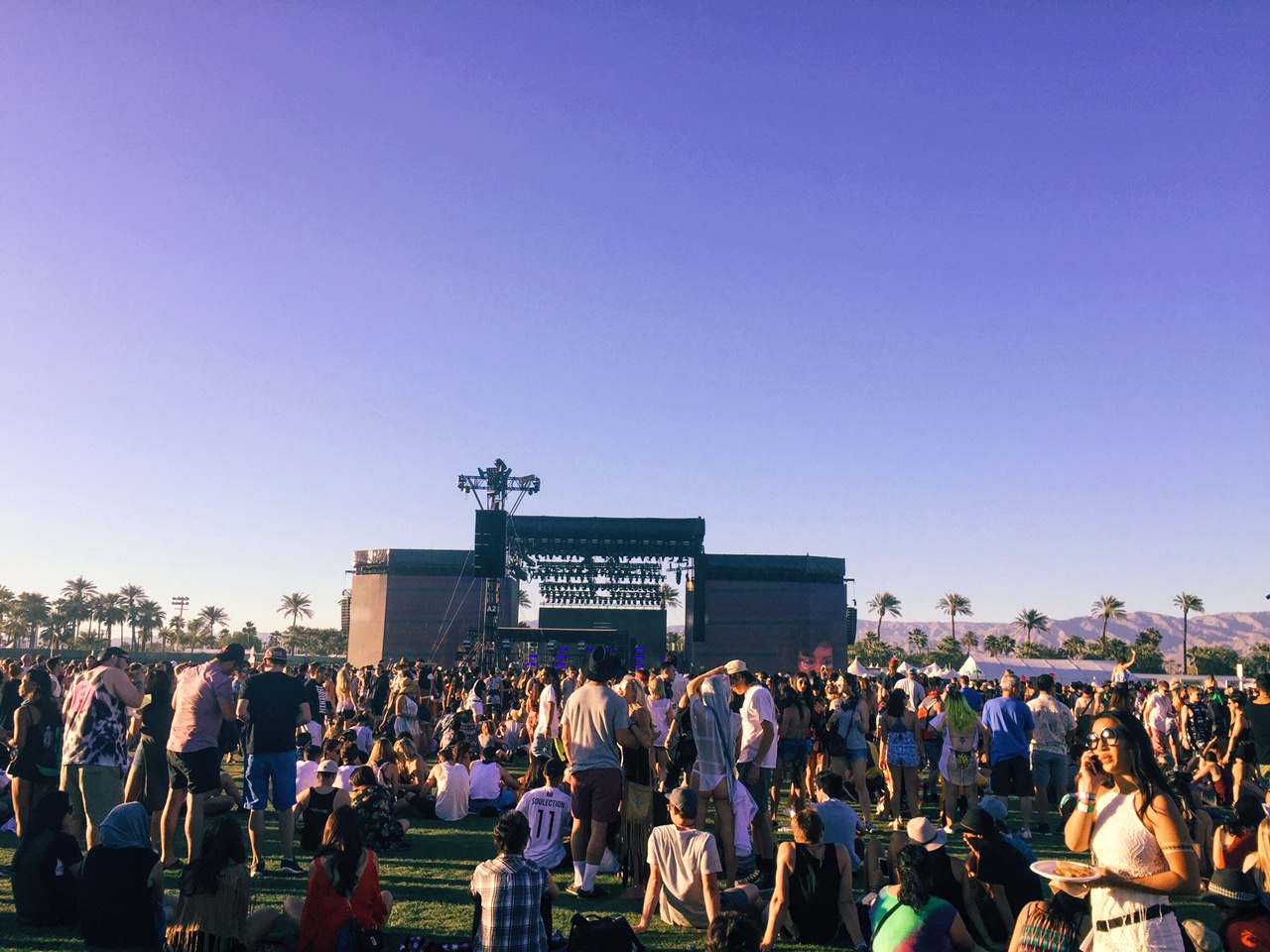 The Coolest Part of Coachella – the Surprise Guest Artists

One of the parts of Coachella was the surprise guest artists. Halsey brought out Panic at the Disco, which made my inner 16-year old so happy. Disclosure brought out Sam Smith and Lorde. And while I wasn’t present at the show, Gallant brought out Seal.

Coachella has me spoilt for concerts forevermore. At several points during Coachella, I wondered to myself, “How will I ever go to a normal concert again?”

My least favorite shows? Ice Cube underwhelmed me, as he shamelessly promoted his latest Barbershop movie the. entire. time. Also ZHU, whose music I love, was a bit boring live.

The Emotional Highs and Lows 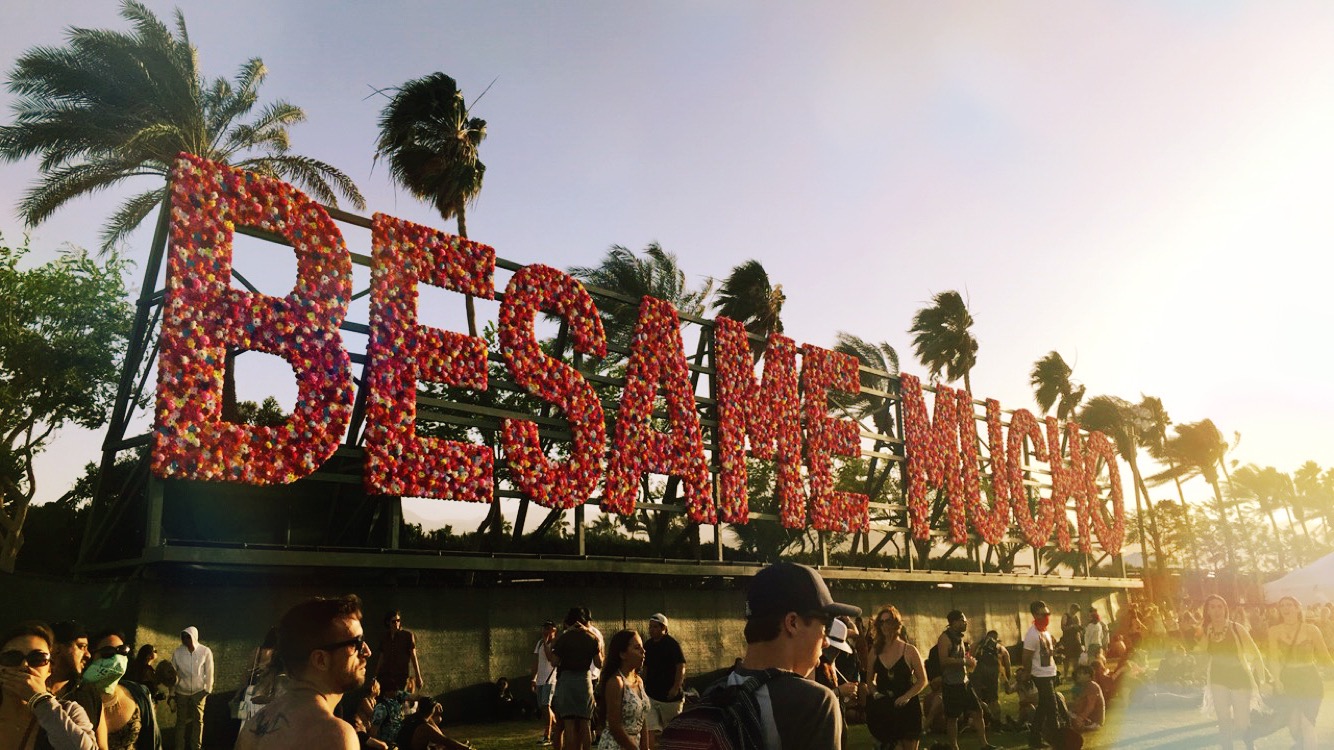 Coachella was a series of highs and lows.

My favorite part of Coachella was what I love about backpacking: meeting people from all over the world, a “you’re in it together” camaraderie, and nonstop, self-indulgent fun.

The lows were mainly due to anxiety and exhaustion; Four nights and three days is a long time to dance all day on little sleep. Camping was particularly trying because there’s no escape if you need a break. It can be tough for introverts who occasionally want to chill and read a book.

As I’ve written about before, my anxiety tends to flare up when I drink too much. So by day four, I was feeling a bit depressed and anxious.

And it turns out that PCD, or Post Coachella Depression, is real. I felt depressed for about a week after Coachella, as the real world just felt so unstimulating. It was like I had gone from technicolor to black and white.

What I Wish I Had Done Differently 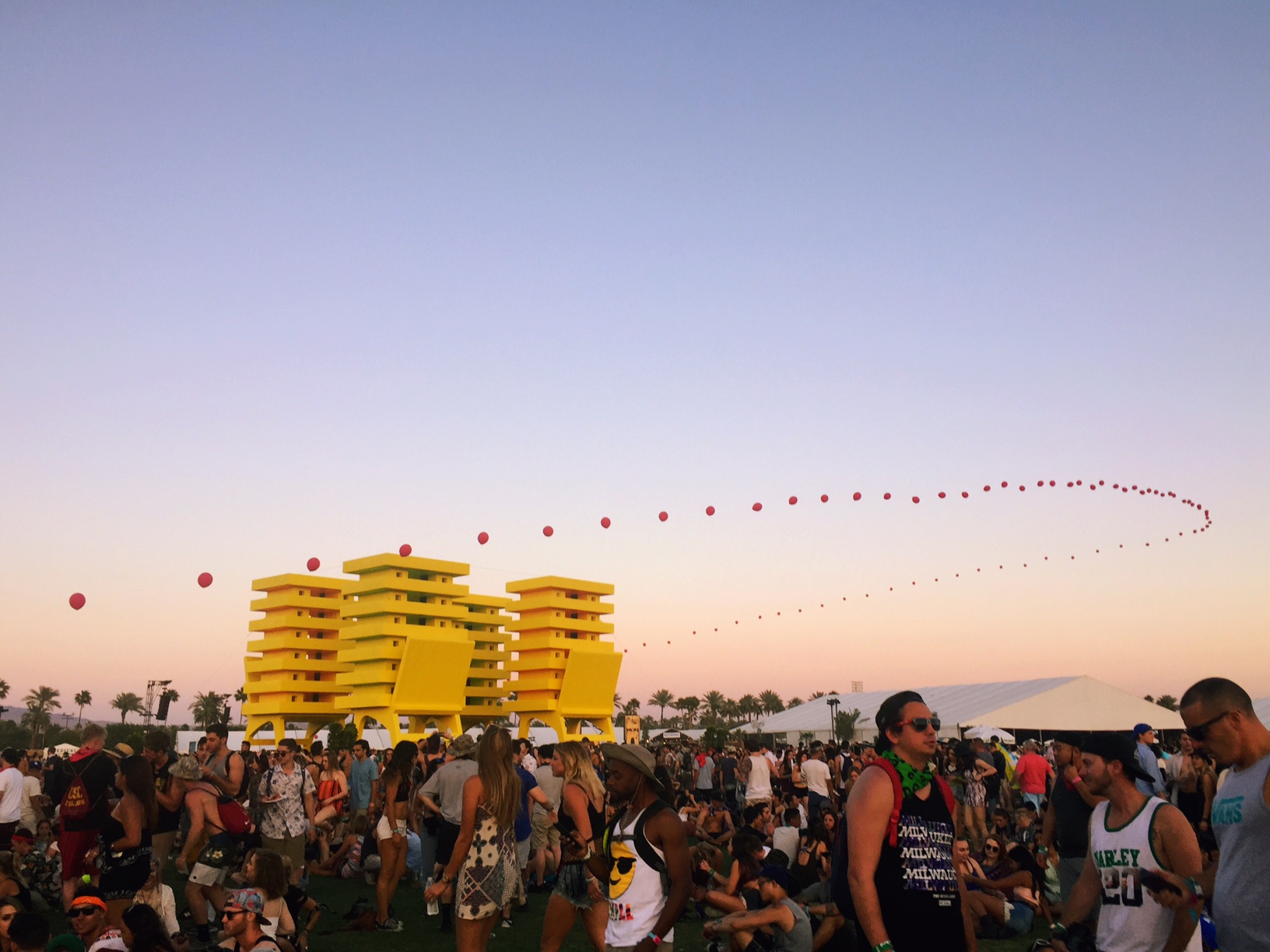 I wish I had bought my ticket in advance.

The morning of Coachella, I flew to LA without a ticket. Luckily, I snagged one via Craigslist for $500 at NOON, right before driving to Indio, which was basically a Christmas miracle. (I was about to buy a ticket for $780 on StubHub, so thank god I was patient. And thank god for the Craigslist mobile app.)

All in all thought, I wouldn’t buy my ticket last minute again – so stressful.

I wish I had packed more.

This may be an uncommon problem, but I wish I had packed more. I only brought three outfits, so when I wanted to wear something else or a shirt was dirty, I was SOL.

I also wish I had brought a fanny pack – so many girls had them and they were so handy.

I wish I had taken more pictures.

I wish I had brought my GoPro and polaroid camera – it would have been so much fun to hand out photos to people. Instead, I just have my lackluster iPhone photos.

How Much Coachella Costs

Food: I spent around $15 a day on food and drinks. I also split groceries with the group ($50 each) that lasted us the whole weekend.

Here are my favorite songs from Coachella 2016!

Have you been to Coachella? What was your experience as a Coachella first timer like?

17 thoughts on “My First Coachella: Highs, Lows, and What I Wish I Had Done Differently”