Want to know something kind of crazy? On my four-month round-the-world trip, during which I visited 10 countries total, I visited only three new countries.

And the only new one in Southeast Asia? Malaysia.

But thankfully, Malaysia was so historical and surprising and different from anywhere else I’ve been (besides Singapore, perhaps), that it made me feel like a less lame traveler.

Out of all the Malaysian cities I saw, I fell hardest for Penang. From the crumbling Chinese shophouses to the Peranakan mansions to the creative bursts of street art all over the city, Penang was a dream for this colonial history-loving traveler. 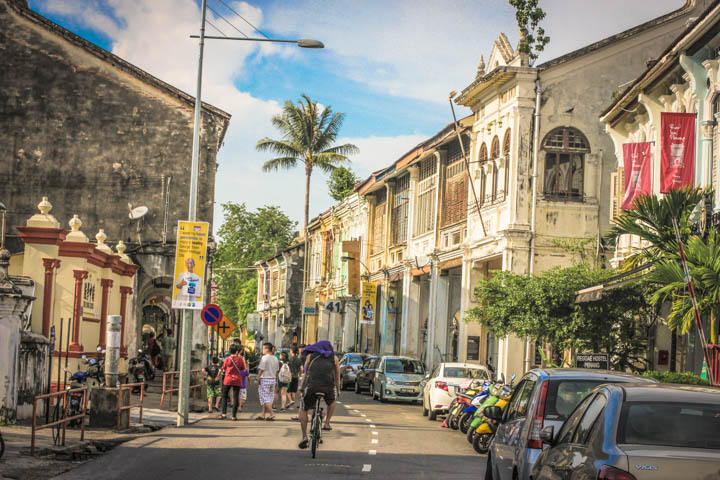 I bunked up in Georgetown, Penang’s historic and touristic center, for four nights. It turned out four nights was too short a sojourn, and I found myself wishing for more time at trip’s end.

I missed a lot: the Photography Museum, Kek Lok Si Temple, a Peranakan cooking class. What can I say? It was about a zillion degrees outside and after more than three months of travel I just wanted to soak in my surroundings, rather than bop from tourist site to tourist site.

But despite my wishes to avoid any and all humidity, I managed to see, eat and do quite a lot. 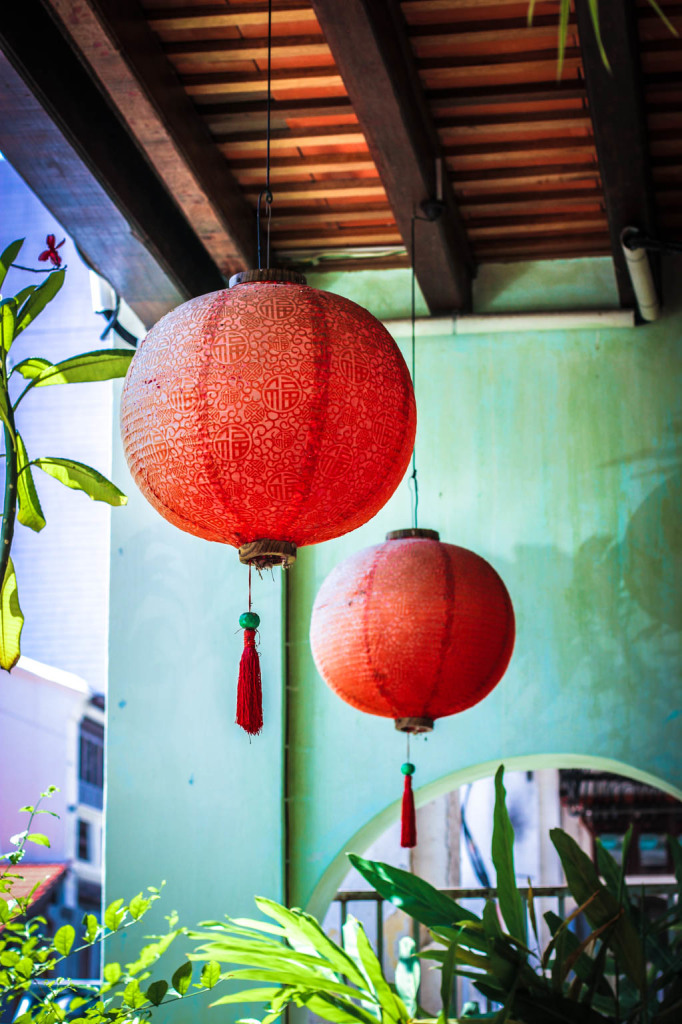 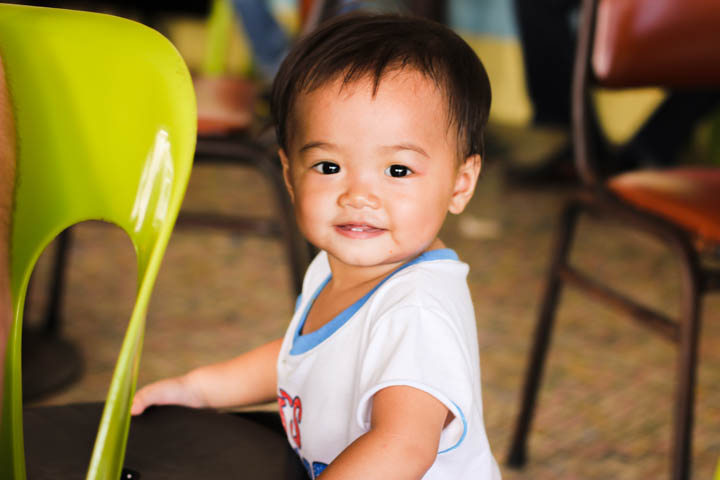 Since childhood I’ve had a fascination with both colonialism and the inner workings of Chinese households. (Which probably stemmed from Ties That Bind, Ties That Break. Anyhow.) 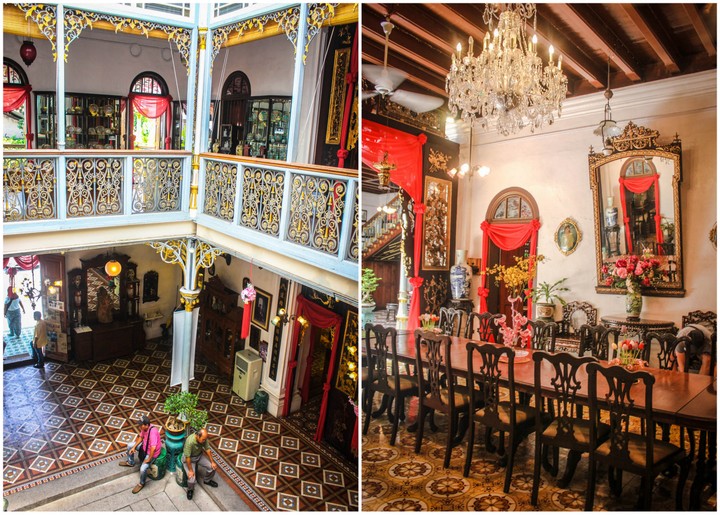 Which is why I absolutely loved the Pinang Peranakan Mansion– an immaculately restored Straits-Chinese home filled with turn-of-the-century treasures like Victorian furniture, vintage china and bedazzled Nonya slippers.

I spent hours there taking photographs and examining the hundreds of antiques on display, as well as fervently wishing I could time-travel back to early twentieth-century Penang and attend a soirée at a wealthy Peranakan trader’s home. Alas. 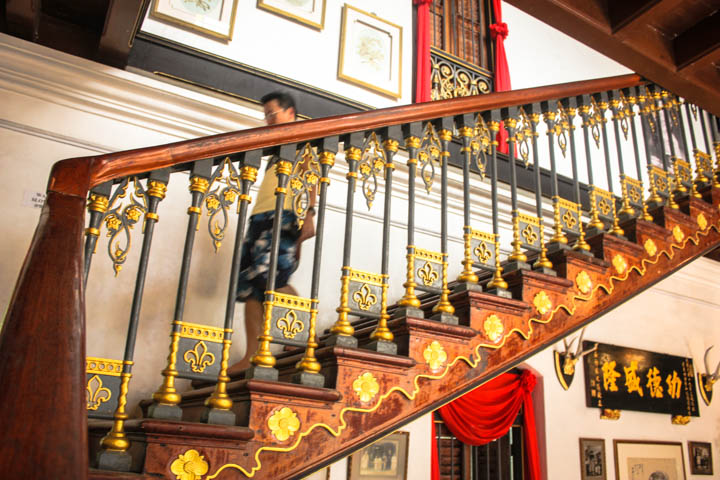 The clan jetties of Georgetown have stood for more than a century. They began as sheds used as resting places for the dock-workers, and eventually developed into communal dwellings with a Chinese clan occupying each jetty. (Interestingly, the same six clans still occupy the jetties.) 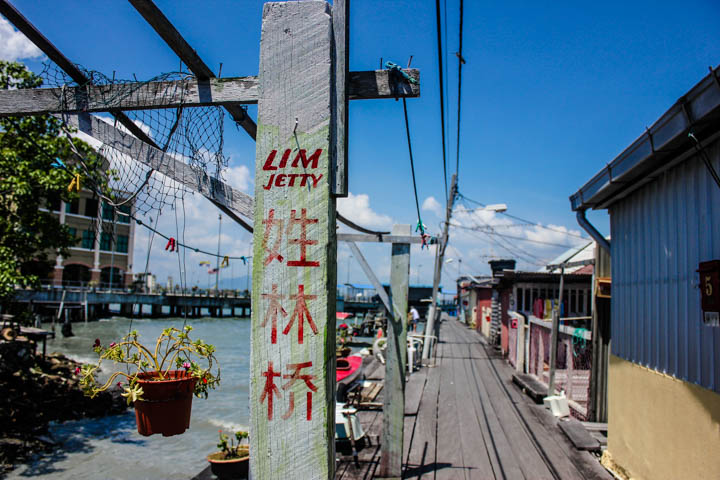 I found it neat that people still live in the stilt houses- while wandering I spotted motorbikes, pet cats and laundry flapping in the wind. While there were lots of tourists, the jetties truly still are family homes.

While there’s nothing to do at the clan jetties per se, they’re worth a wander while in Georgetown. 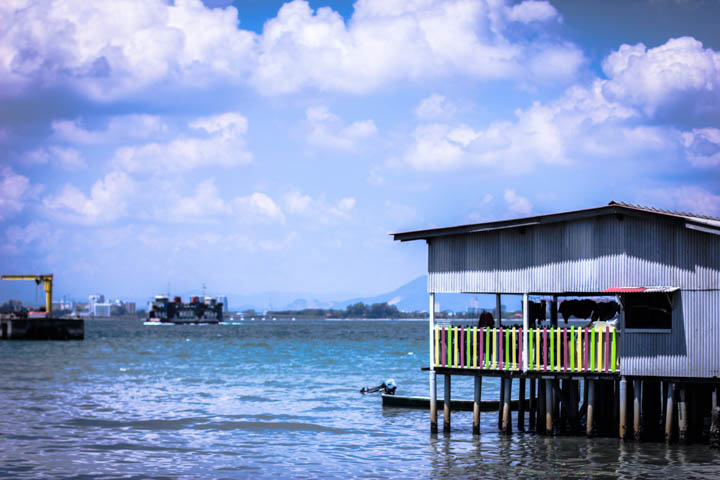 I apologize for these overexposed street art photos- in Penang I made the fatal mistake of trying to take photographs in Asia during the day.

But despite these so-so pictures, the street art in Georgetown was seriously impressive. My British travel buddy Dylan and I spent an entire afternoon combing side streets and found some beautiful murals. And waited our turn to pose with them of course. 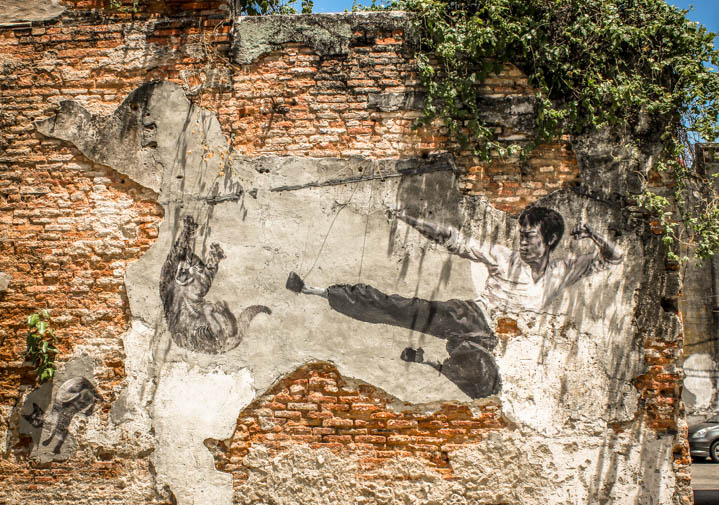 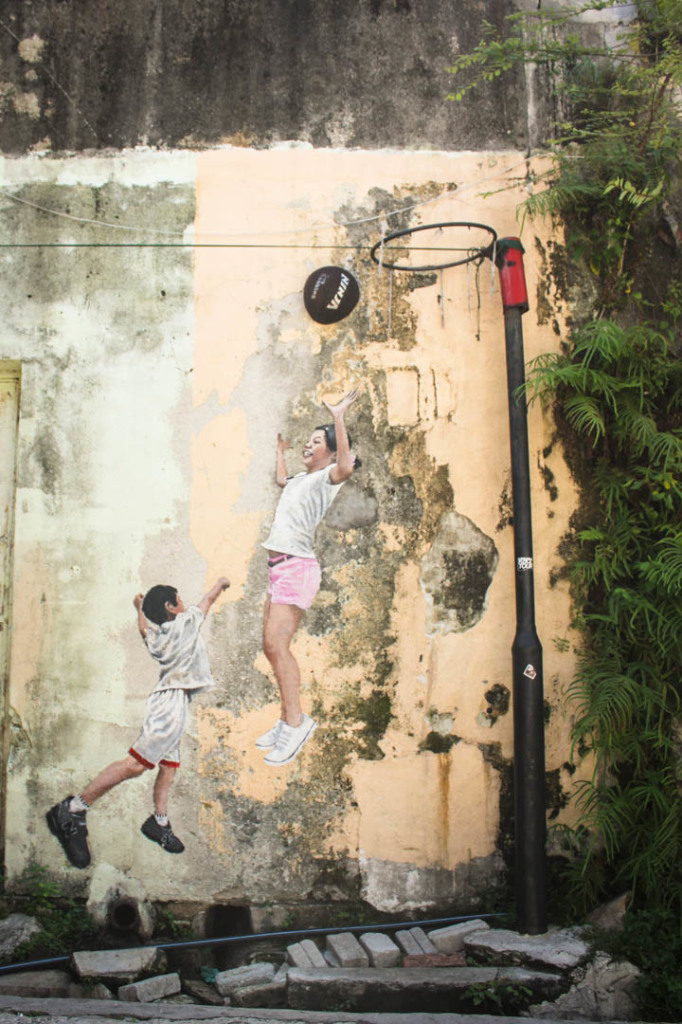 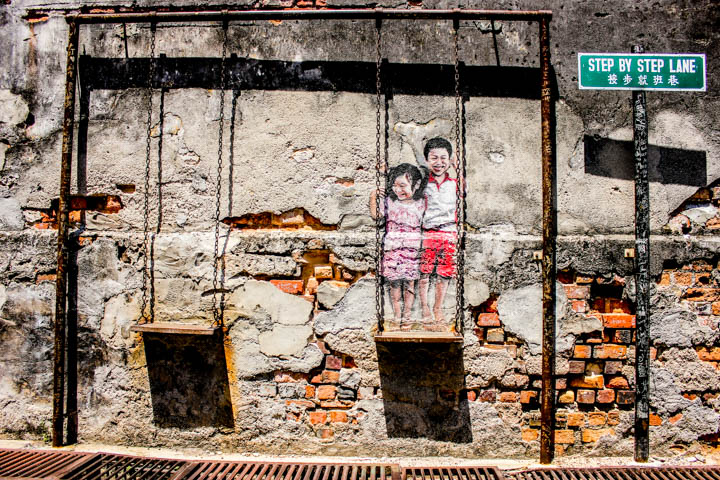 I particularly loved work by Lithuanian-born arutist Ernest Zacharevic. Most of his work depicts Malaysian children doing everyday things like swinging on a swingset, playing basketball or flying a kite. But what makes his work so special is the 3-D nature of his work, with the inclusion of real objects. 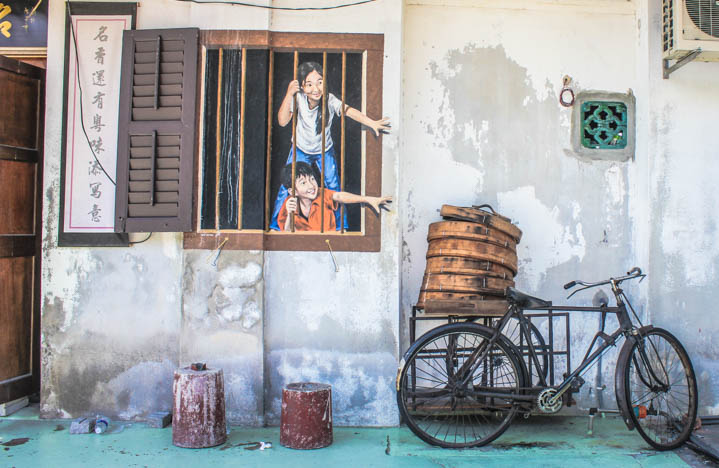 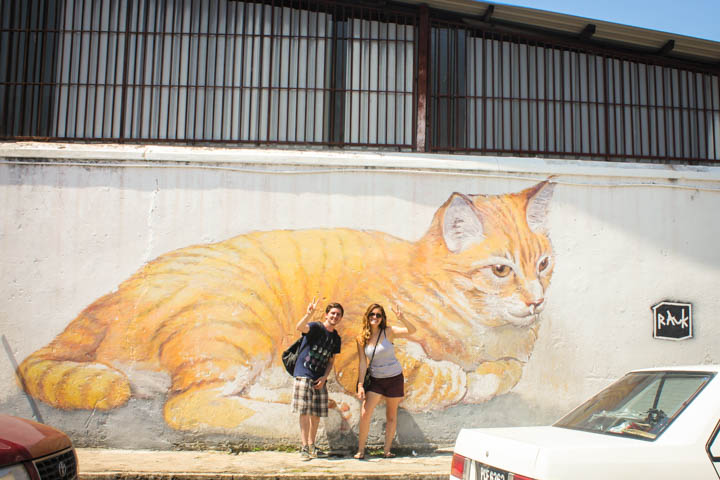 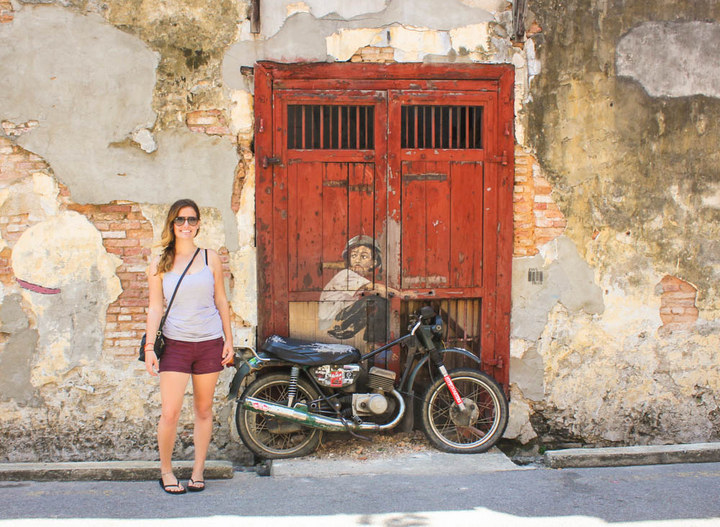 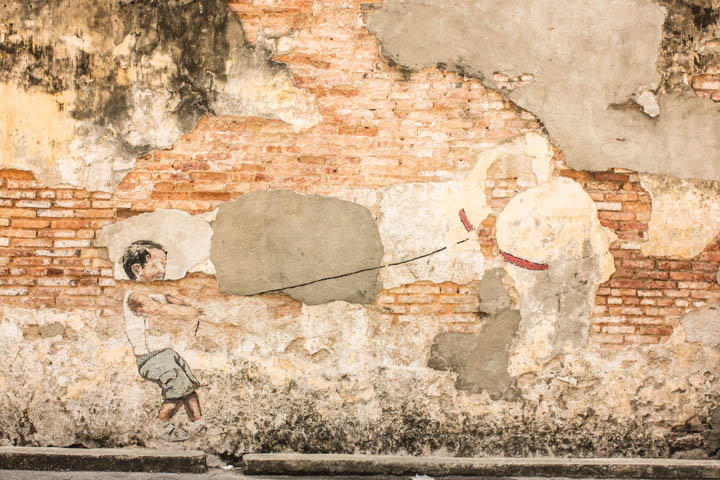 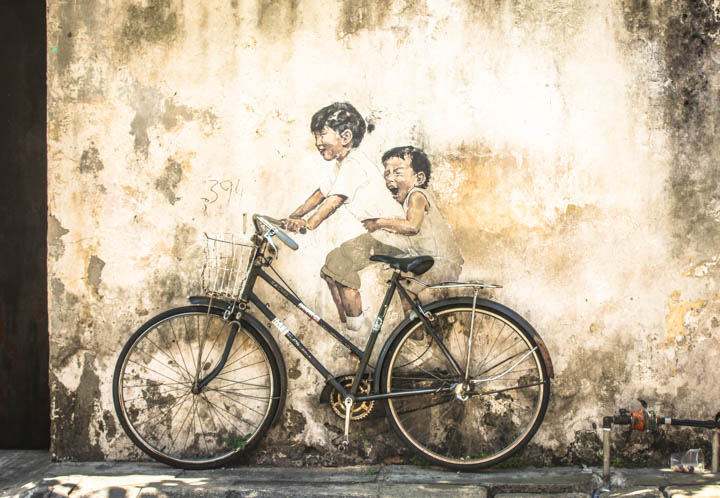 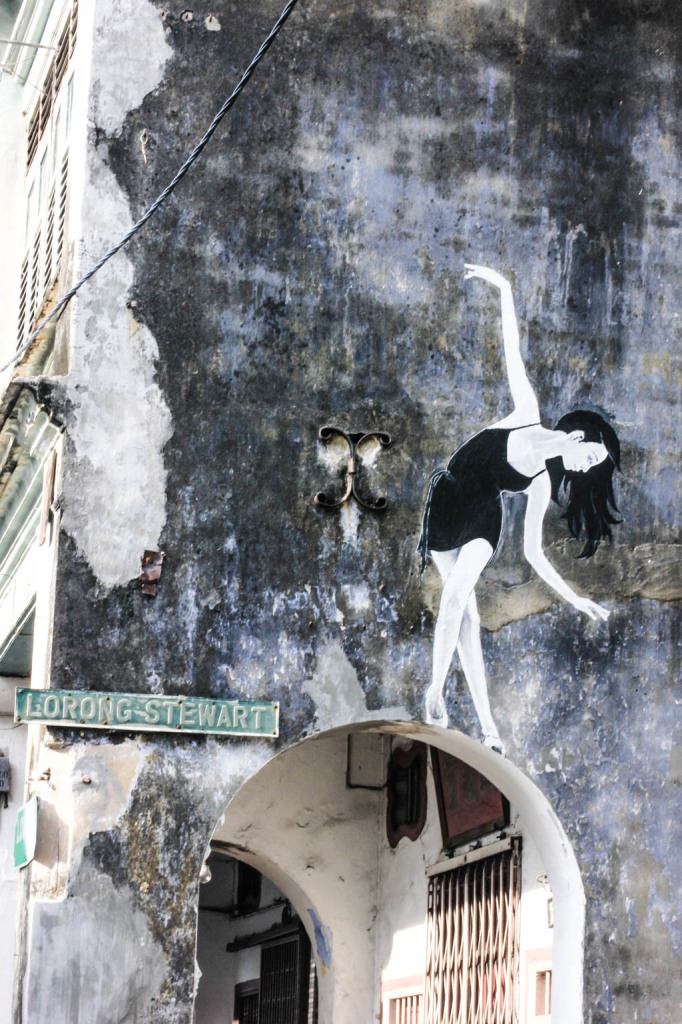 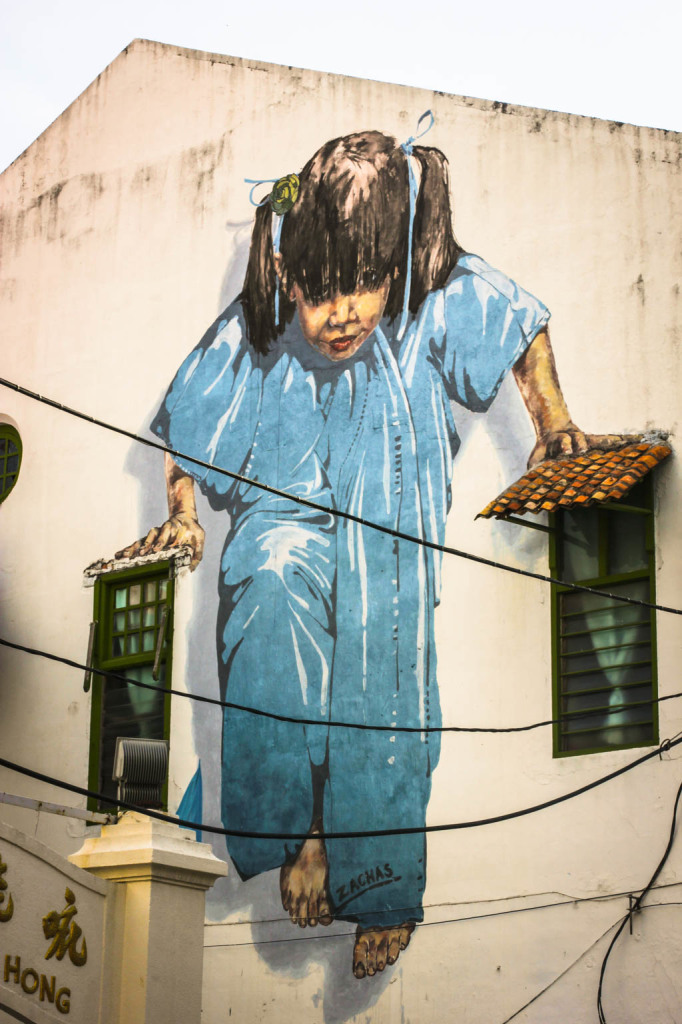 Eating at the Hawker Centres

When in Malaysia eat as the Malaysians eat, right?

In Penang I was delighted to find Singapore-style hawker centres, filled with a similar mixture of Malay, Indonesian, Chinese and Indian stalls I came to love in the Little Red Dot.

One particularly sweltering afternoon while seeking cold water and fans, Dylan and I popped into the CF Hawker Centre. There we noshed on wanton mee and popiah, though sadly neither were quite as good the ones I had in Singapore. 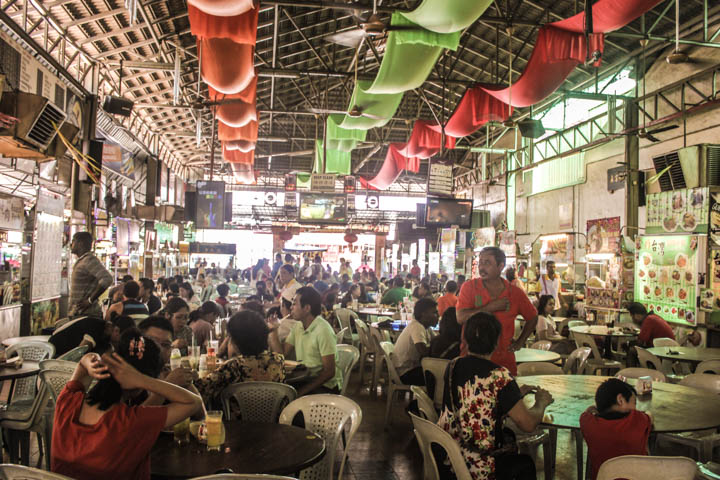 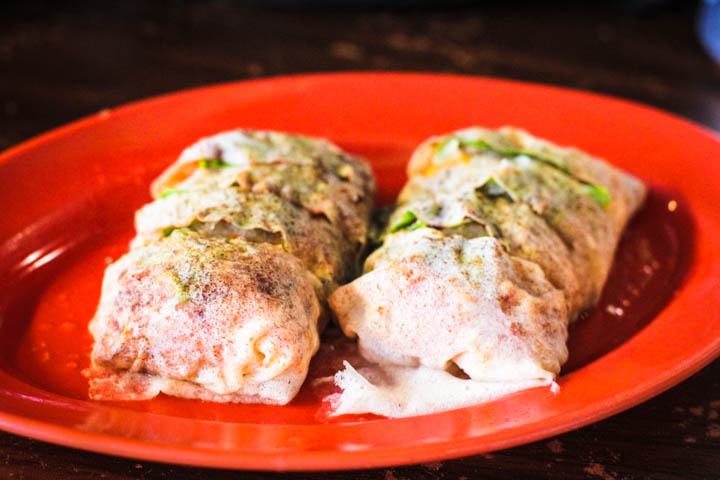 Our second hawker centre of the trip was Red Garden Food Paradise.

When we arrived for dinner we were far too early- the vendors hadn’t even started grilling. So we filled our stomachs (and our time) with a round of beers, which as always in Malaysia, was over-priced.

(To be fair I guess that’s what you should probably expect in a predominantly Muslim country.) 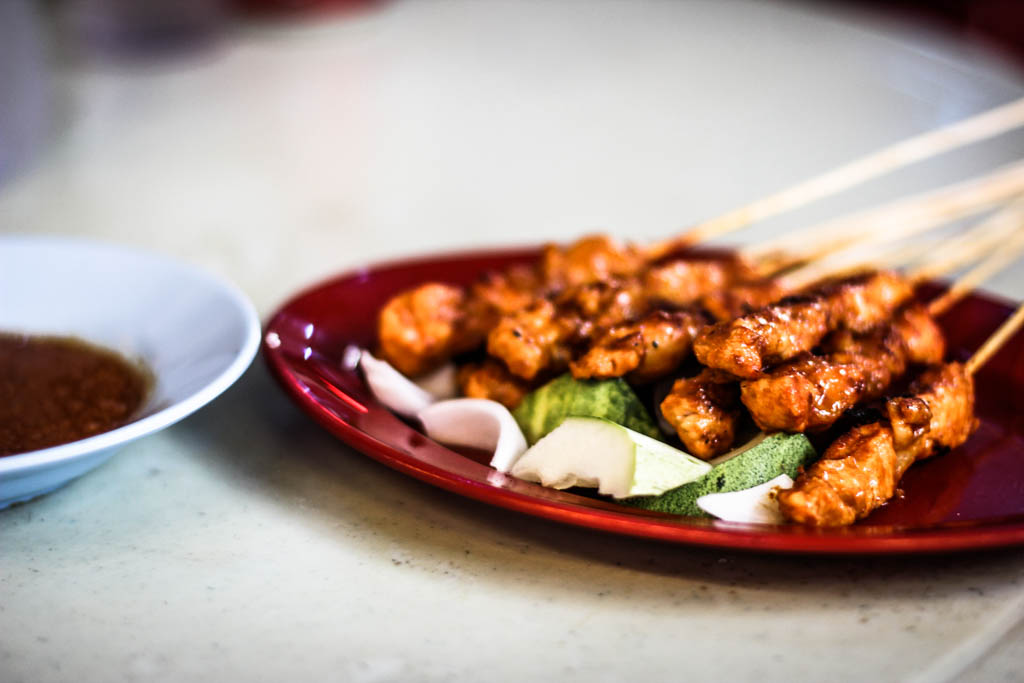 And when at long last the vendors started cooking, we tucked into chicken rice (soon to become my Malaysian staple), stewed eel (blergh) and chicken satay with peanut sauce (a favorite of mine from my time in Indonesia). 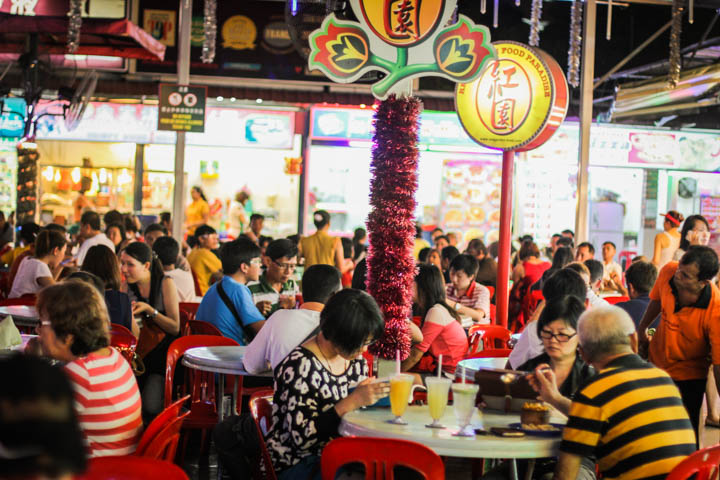 While in Penang Dylan and I stayed in at Roommates Penang, a quaint hostel located in central Georgetown. I absolutely loved the traditional Chinese shophouse façade, as well as the location: Roommates is located near all the UNESCO sites, street art and hawker centres. 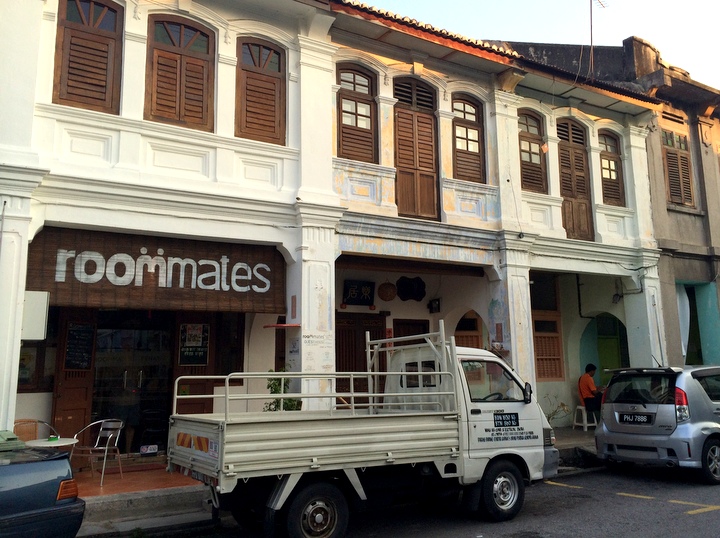 I’ve stayed in dozens of hostels in Asia, and I can safely say Roommates is a good one- first off, the AC was glacial- essential in Malaysia in June. Secondly, I loved the privacy of the cubby bunks, and that the dorms only fit four people.

One downside was the lack of a common area- as someone who is always looking to meet other travelers I would’ve loved an area to socialize. Still, watching illegally downloaded Game of Thrones in our private, air-conditioned cubby bunks was pretty glorious.

Have you ever visited Penang?

A big thanks to Roommates Penang for hosting me in Penang. While they offered me two nights, I stayed a few more because I sincerely enjoyed my stay.