I’m super excited to blog about India, but first let me to say, India is far too vast and diverse a country to sum up in a blog post. So please note that I am only reporting on my personal experience in Northern India; these observations in no way apply to India as a whole.

While life in Northern India was trying at times, overall I enjoyed my six weeks in India.

What I loved most about India is that it’s so rawly, uniquely Indian. On my travels I’ve found globalization and modernization have diluted much of the world’s culture. India, though it has been affected, is still so Indian. And with nearly 5,000 years of civilization, would you expect any less?

Indian people have a uniquely Indian way of doing almost everything, from to dressing to dancing to worshipping. I could’ve spent years in India and barely scratched the surface on its extraordinarily rich and diverse culture.

And truly, India was the adventure of my life. Out of all the 38 (!!!) countries I’ve visited, India was by far the dirtiest and poorest, but also the most colorful, spiritual and fascinating.

Here’s what I loved and didn’t love about India. 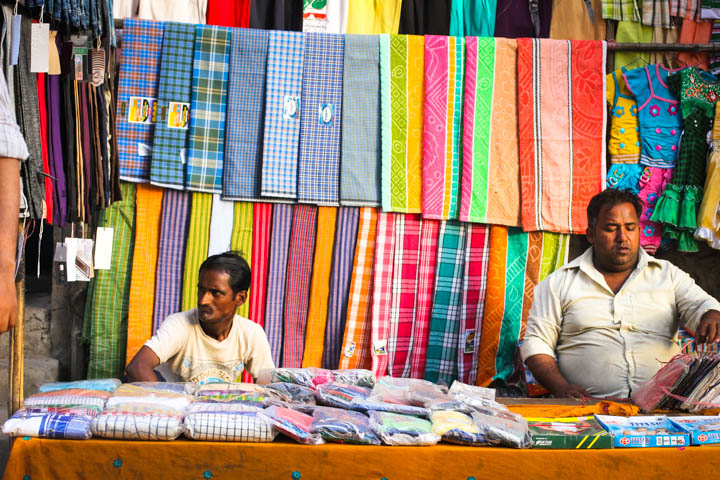 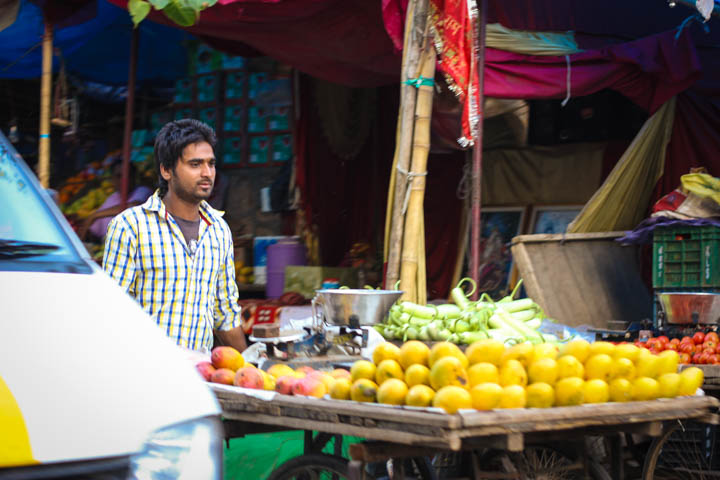 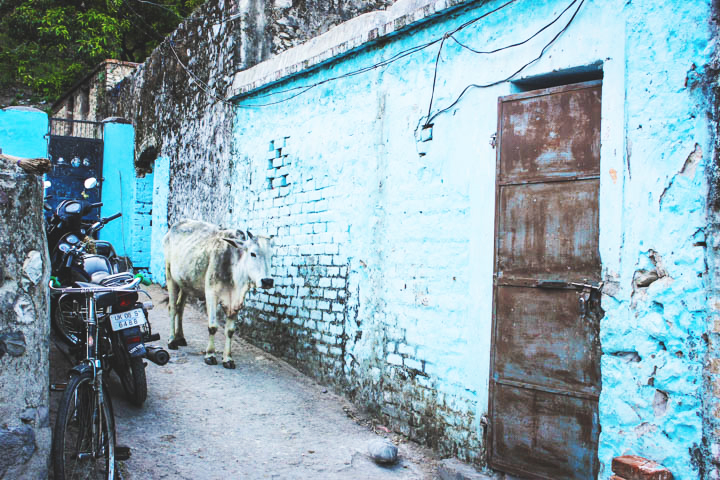 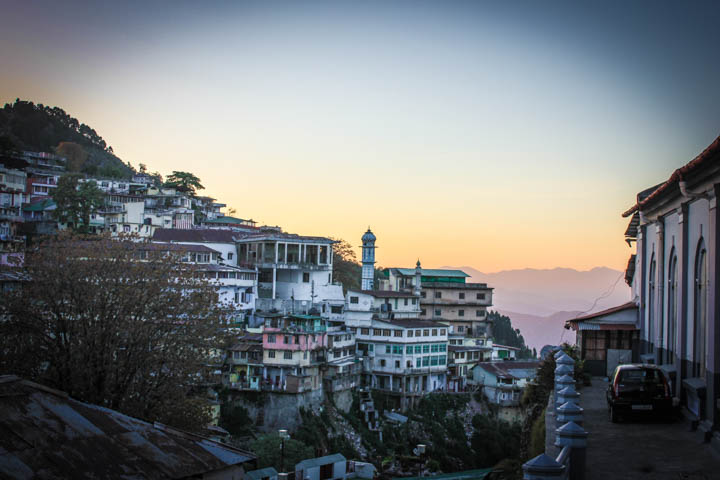 How Easy It Is to Connect with Locals

Overall Indians speak fantastic English so it’s fairly easy to meet locals. I was surprised that even in rural areas of India most people spoke great English!

Also I love how Indians speak; their speech is peppered with everything from British colonialisms like “bathing costume” to direct translations of Hindi phrases like “what to do” (kal kare) and English bastardizations like “prepone” (as in we’re going to prepone, or move forward, this meeting).

I even miss hearing- “You know what happen?” 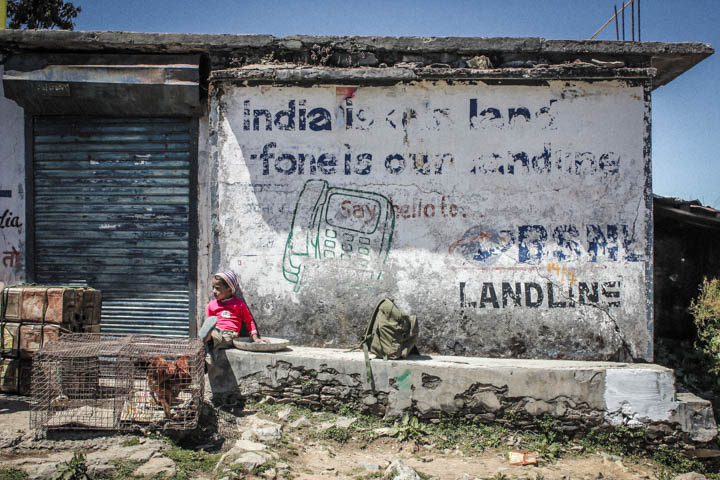 As anyone who has ever wandered an Indian neighborhood or seen a Bollywood film can attest, Indian women dress beautifully. I loved spotting women in saris gathered together; it was always such a blend of emerald green, saffron and other technicolor shades.

Along with beautiful clothes, Indian women wear lots of gorgeous jewelry. I wore a silver anklet the entire time I was in India and before leaving bought fistfuls of anklets for friends back home. (Setting aside no less than four for myself, ha.)

Also I found it interesting that women can expose their bellies in India but not their legs, the sartorial opposite of the west. The one day I wore a knee-length dress in India I got a ton of attention and sent the dress home soon after! 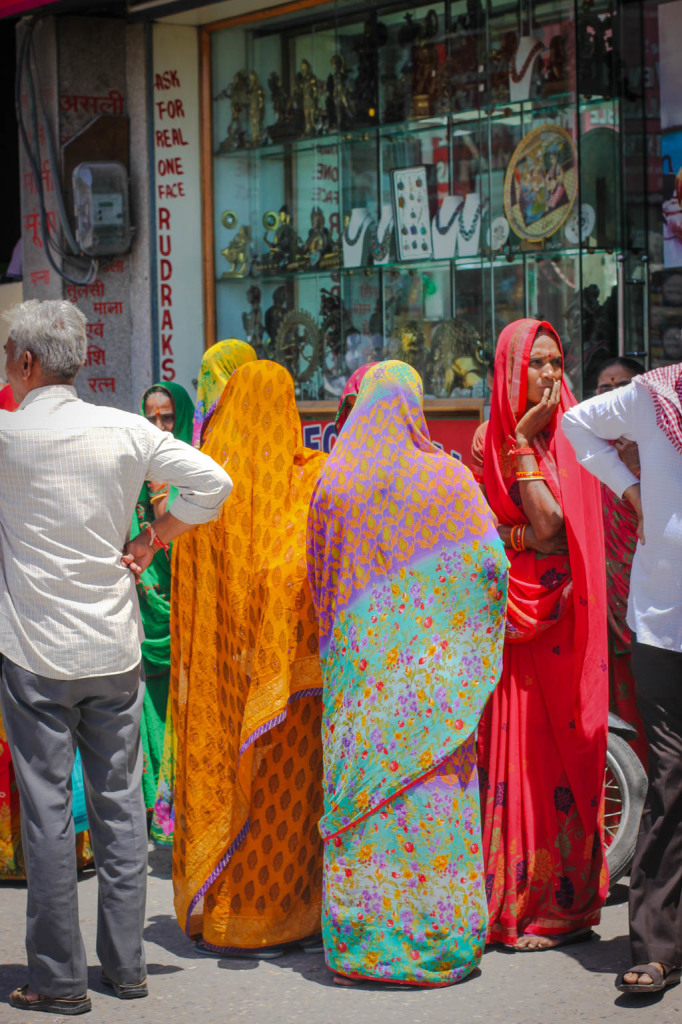 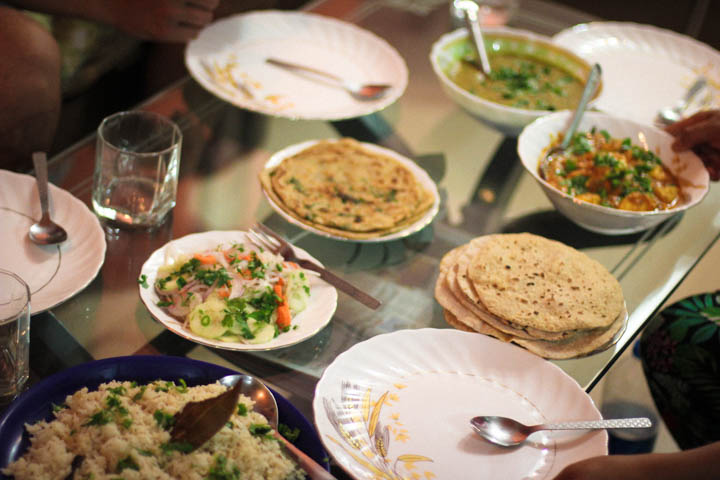 A home-cooked meal in Delhi

Oh my. Indian food, as everyone knows, is delicious. I fell in love with everything from baingan bharta, a Punjab eggplant dish, to batata poha, a Gujarati breakfast dish made of potatoes and rice flakes.

While admittedly I did get sick of rice and lentils, I swear I could eat paneer butter masala all day long. 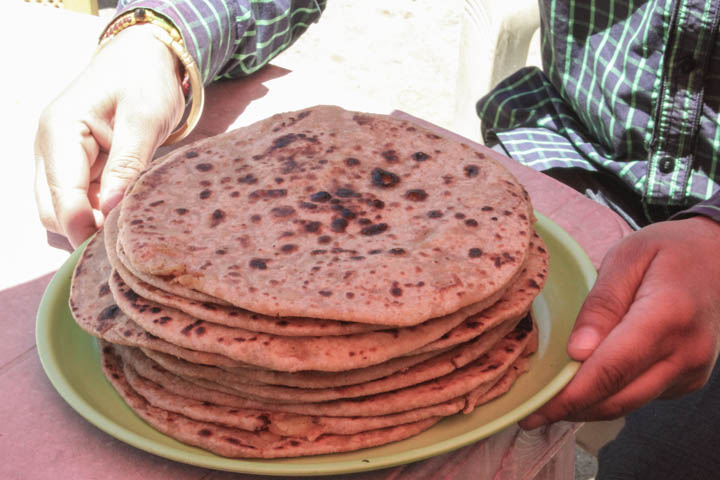 Chapati, or roti, our daily staple for six weeks.

What I miss most? Chai. While in India chai is really sweet (I normally ordered it without sugar), it’s so spicy and flavorful. Yum. 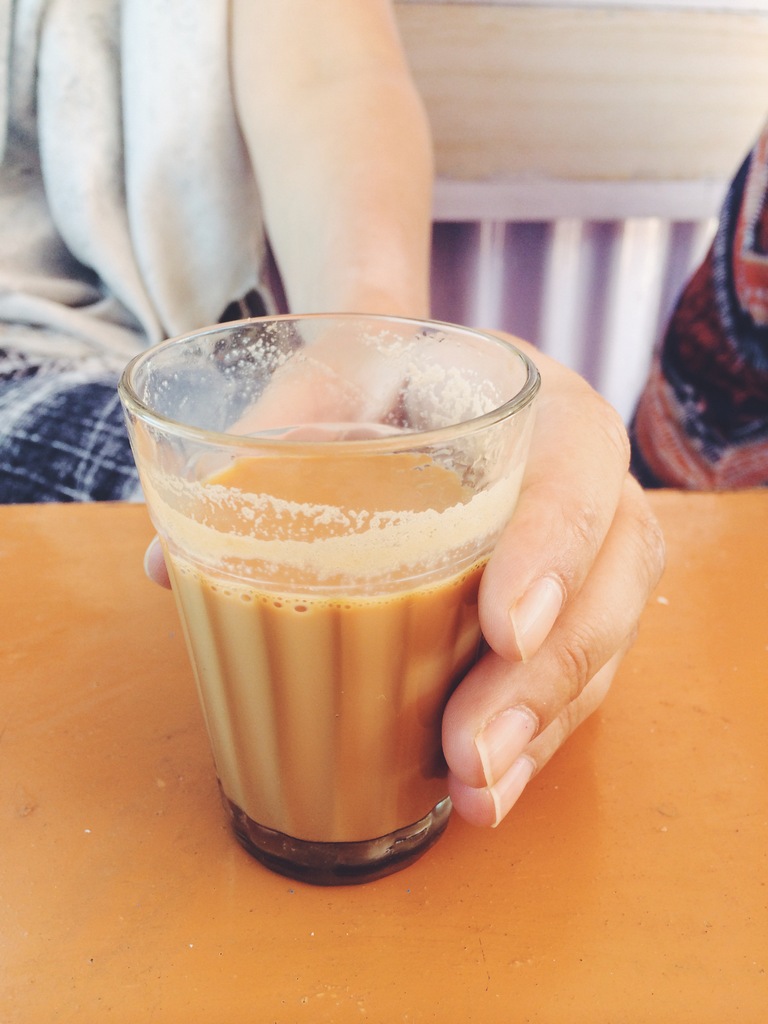 One song we all couldn’t stop singing was the “Pani” song. Listen at your own risk- it may be stuck in your head for the rest of your life.

One song I never want to hear again is Party All Night, which our bus driver played no less than 12 TIMES IN A ROW while driving hairpin Himalayan roads. Yeah.

The Extraordinary (And Cheap!) Massages

Move over, Thailand. India is where it’s at for inexpensive, life-changing massages.

While in India I treated myself to weekly $12 massages. My masseuse specialized in a blend of Ayurvedic and deep tissue, and I won’t lie- at times it was painful. When I asked for a softer massage, he retorted, “But I’m already doing it medium! Don’t worry this is good for you.” And considering how many knots he worked out of my back, he was probably right.

Learning about Hinduism, Yoga and Spirituality 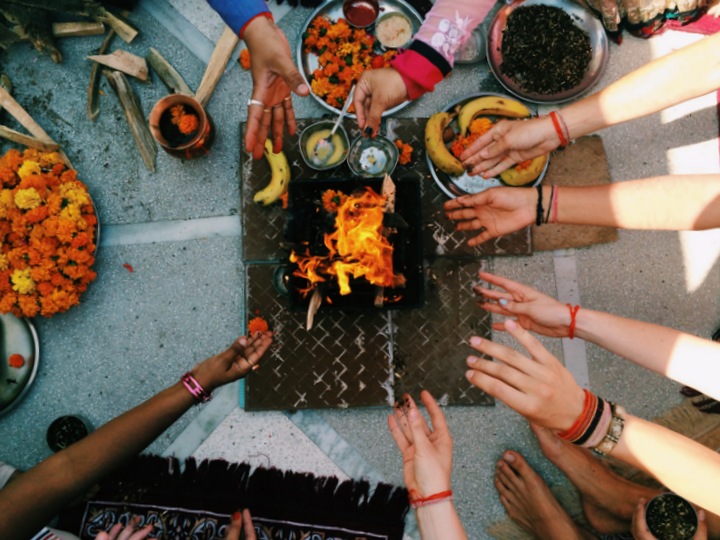 Performing a puja ceremony in Rishikesh

While I will write on this at length soon, Hinduism was a huge part of my experience in India; after all I was studying yoga in a holy city on the Ganges! During my four weeks in Rishikesh I learned to sing countless Sanskrit hymns and meditated daily under the stars; I have so much to share about how my own spirituality has changed.

India is by far the cheapest country I’ve ever visited; it even makes Southeast Asia look expensive in comparison! I especially miss my daily fresh-squeezed mango juice ($1) and paying $2.50 per person for a dinner of  fresh-squeezed juice, an appetizer, naan, three main courses and tea.

While I had mixed feelings about the cows as they contribute to the flies, filth and foul smell of the streets, they sure are cute. There are tons of cows in the streets in India, and they often wander into shops or block doorways; it’s like they’re aware of their own holiness.

Though I do wish I could herd them all up to a Himalayan pasture where they could feast on grass, not trash! 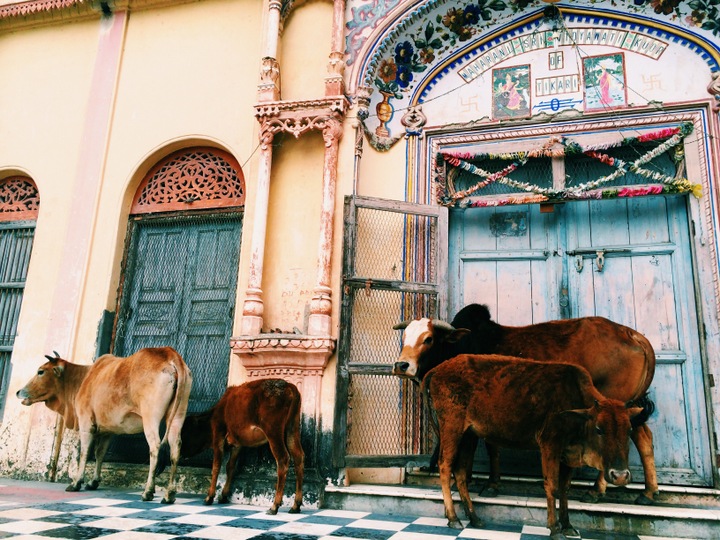 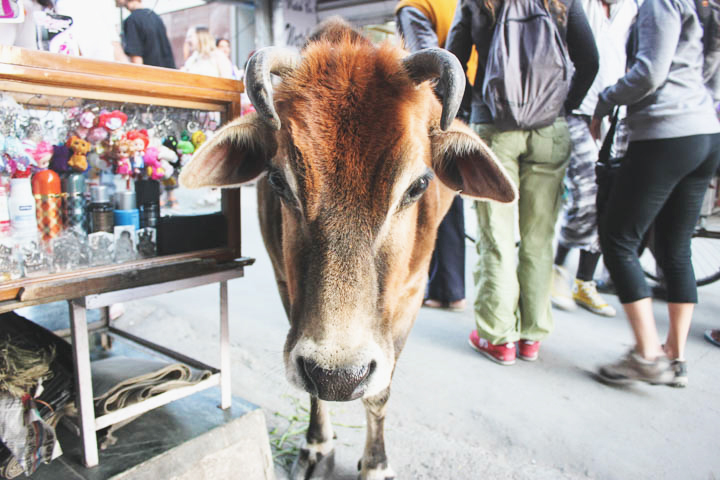 And as for the things I didn’t love?

If you visit India, never, ever, ever, take a peek inside the restaurant kitchens. Just don’t. Because the food hygiene standards are often horrendous.

In general, I’m the least germaphobic person ever. I live by the motto, “What’s the worst that could happen?” and have loved everything from dirt-cheap seafood stalls in Chile to napkin-littered holes-in-the-wall in Vietnam.

But India is in a class of its own. For example, one morning a friend and I were enjoying a leisurely Western brunch. I ordered an omelet, she ordered a crêpe. My friend’s crêpe came and had several long, black hairs inside. And then I noticed my omelet tasted a little funny. So I called the server over and said, “Sir, I think these eggs are rotten.”

He replied matter-of-factly, “Yes, they are rotten.”

I was indignant. “WHAT? Then why did you serve them to me?”

“It is not my fault. The man who was supposed to bring the eggs this morning did not come.”

The rotten egg aftermath? I went home right away and had food poisoning all day, and my friend decided to meet friends and consequently threw up in a bush. Good times.

Monkeys are kind of like the evil squirrels of India; they’re everywhere. From nearly being attacked by teeth-baring macaques on a morning run to having monkeys jump into our classroom, I became a little too acquainted with monkeys while in India.

The monkey below? I took his photo after he banged into our bedroom window one morning. Actually my roommate and I were routinely woken up by monkeys slamming loudly against the window. 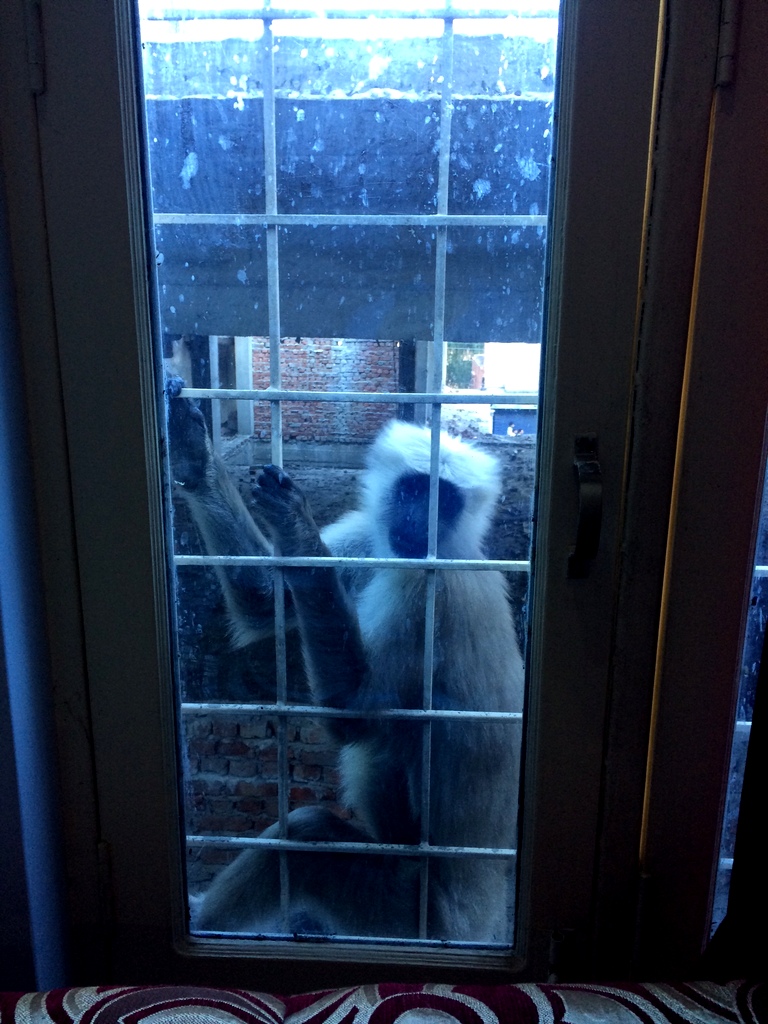 This monkey is a gray langur- they’re actually no trouble at all. It’s the dreaded macaques you have to watch out for!

There’s no two ways about it- India is dirty. And it smells. And there are lots of flies.

Here’s how it happens; cows are sacred, so they roam the streets unharmed, eating trash and leftover food. They defecate and flies lay their larva in the cowpies. The flies hatch from the cowpies.

And the smell? Just imagine how cow shit and rotting trash smell on a 110-degree day, and there you have it.

Naturally, there’s lots of air pollution. I noticed my eyes were unusually dry in India, and resorted to using eyedrops multiple times a day.

Overall the filth didn’t bother me too much, I just avoided going outside from 12pm-4pm every day as that’s when it was hottest and smelliest. 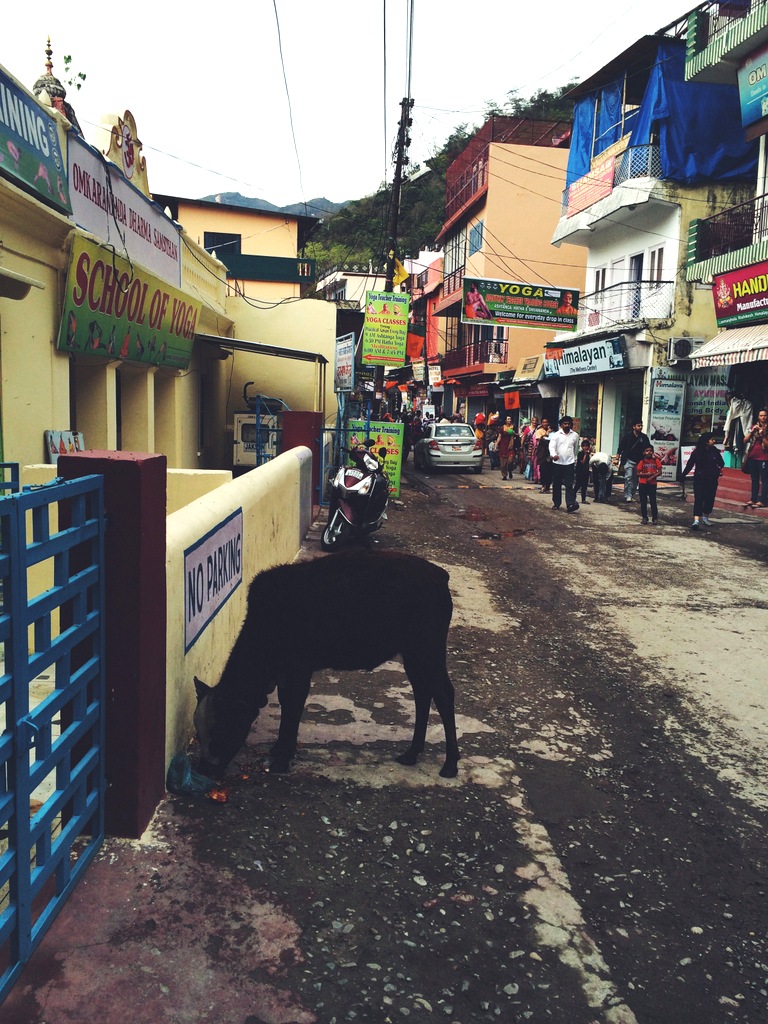 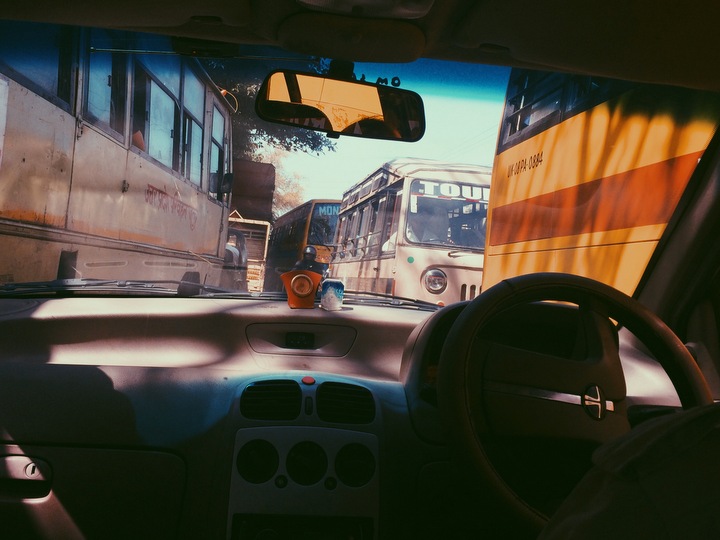 Traffic is also a problem at times! Talk about gridlock.

The infrastructure in Northern India isn’t great. The roads, power outages and lack of waste disposal all take a good dose of patience, especially at first.

A few examples: Our taxi ride from Delhi to Rishikesh took about six hours, even though it’s a mere 140-mile drive.

The power at our hotel in Rishikesh went out 10-15 times a day. Sometimes there was no hot water, and sometimes there was no water altogether. It got to the point when the power was out so frequently I would shower in our windowless bathroom in pitch blackness. Honestly I found it kind of relaxing.

The Unhealthiness of the Food

I was very surprised by how unhealthy Northern Indian food is. I learned first-hand that just because food is vegetarian does not by any stretch of the imagination mean its healthy! In Northern India cooks use a lot of ghee, or clarified butter, and much of the food is deep-fried. Also I found many foods were far too sugary for my palate.

After a particularly trying day of street harassment I wryly remarked, “The social hierarchy in India is men on top, then cows, women and foreign women.”

But jokes aside, India has a long, long way to go when it comes to gender equality. Days after I left India, two teenage sisters were murdered, allegedly gang-raped and hanged from a mango tree in Northern India. A few months later, two more teenage girls were killed in the same fashion.

Most of the attention Indian men paid me was harmless. Usually it was no more than, “I like your dress, madame,” which happens in any country.

But once the attention wasn’t harmless. I will write about this soon, but a group of men circled two friends and I in a park in Delhi and it was among the scarier things that’s happened to me on my travels.

Have you been to India? Would you be interested in going?

54 thoughts on “Intro to India: What I Loved (And Didn’t Love) About India”