After the hustle, bustle and huge skyscrapers of Hong Kong, Macau was a breath of fresh air. In fact it was almost like a little European vacation within Asia.

Along with Hong Kong, Macau is one of the two Special Administrative Regions of China, meaning it maintains a good deal of its own political and economic autonomy. Macau was colonized by Portugal in the 1550s, and only recently regained control from Portugal in 1999. Though I didn’t hear any Portuguese on the island, the Iberian influence was everywhere from the pastel-colored buildings to the Portuguese-language street signs.

Victoria and I took an hour-long ferry ride to this little island, and we soon discovered that this Lisbon with lanterns is so much more than the gambling it’s well-known for.

One thing I noticed right away was that everyone was walking around with umbrellas on a sunny day. And when we went on a wild goose chase for non-whitening BB Cream later, we realized why- everyone in China wants to be pale! 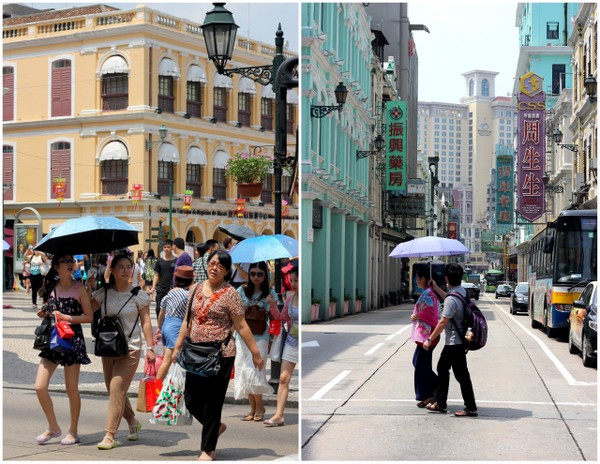 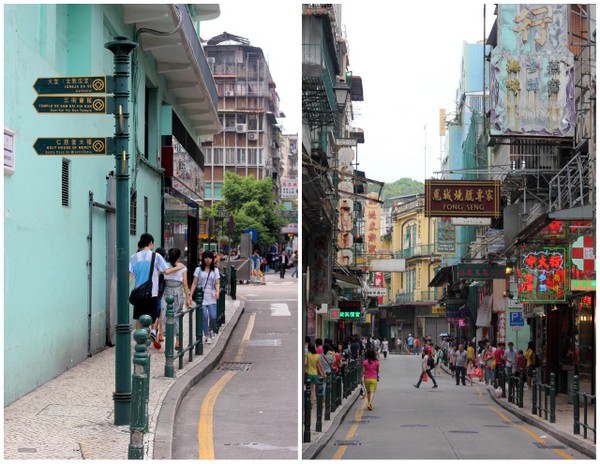 The walls were painted the same pastel colors I remember from Lisbon but were better-kept. 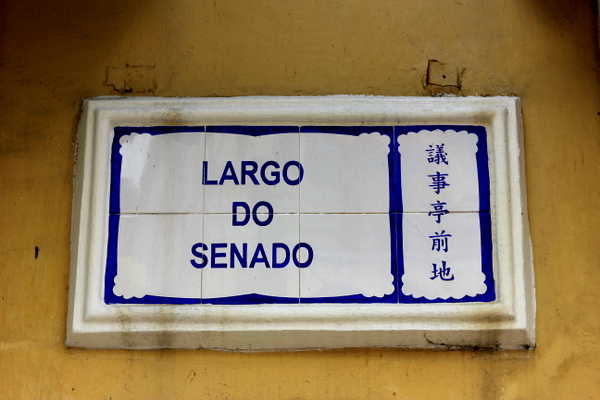 Wanting to escape the tourist prices of the touristy Largo de Senado, the island’s historical center, we wove our way to the debatably sketchy back-allies. 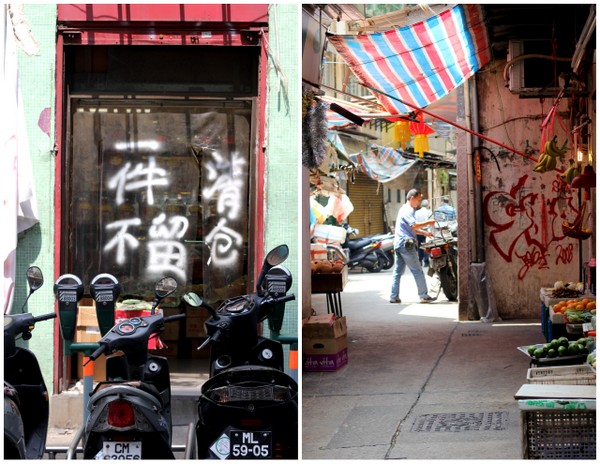 As soon as we found an authentic-looking eatery with passable hygiene standards, the feasting began. As we had no idea how to order, we pointed at a picture of a dish that somewhat resembled chicken and hoped for the best.

And what do you know- it was delicious. I feel like it might’ve been half duck, half goose, with a side of rice and some AMAZING greens. Why does China seem to make the best collard greens-esque side dishes? Love. 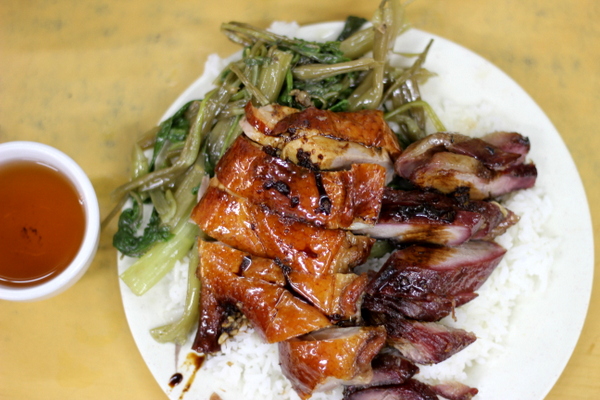 While the meal we had for lunch was all Chinese, as we walked around I had fun trying to spot out the Iberian influences. Doesn’t the hanging ham legs below look just like jamón ibérico? (Portuguese: presunto ibérico) 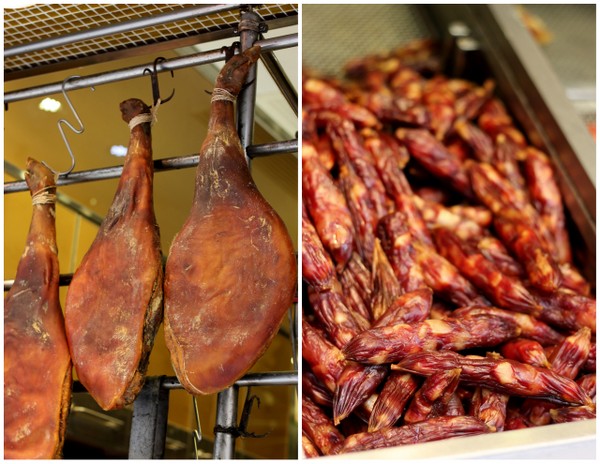 Presunto ibérico, (I think), and Chinese sausage that curiously looks just like chorizo… 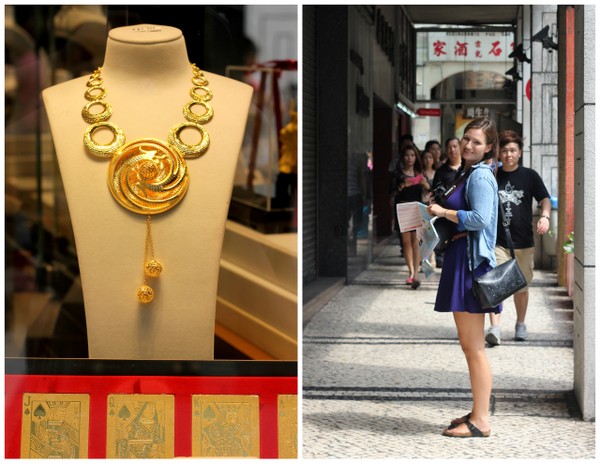 We saw tons of gold jewelry shops as well! 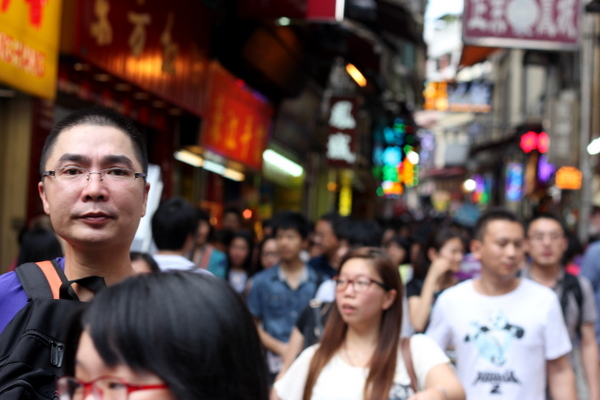 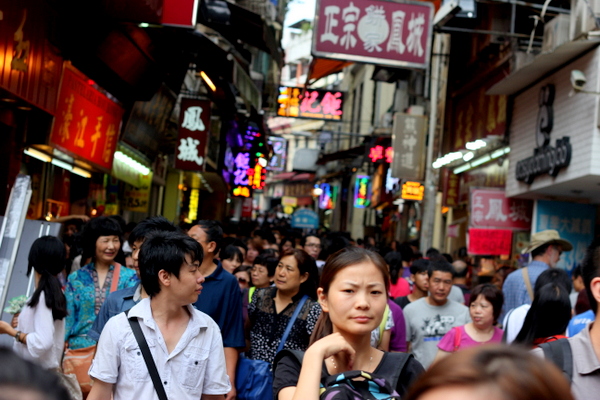 Then we got our first glimpse of the ruins of St. Paul’s cathedral which was honestly one of the most interesting pieces of architecture I’ve ever seen. It reminded me of the cathedral in Santiago de Compostela but you could see right through it.

It was also here, on the steps in front of the cathedral, that a young Chinese girl asked me for a photo- which was needless to say a very funny but awkward moment. 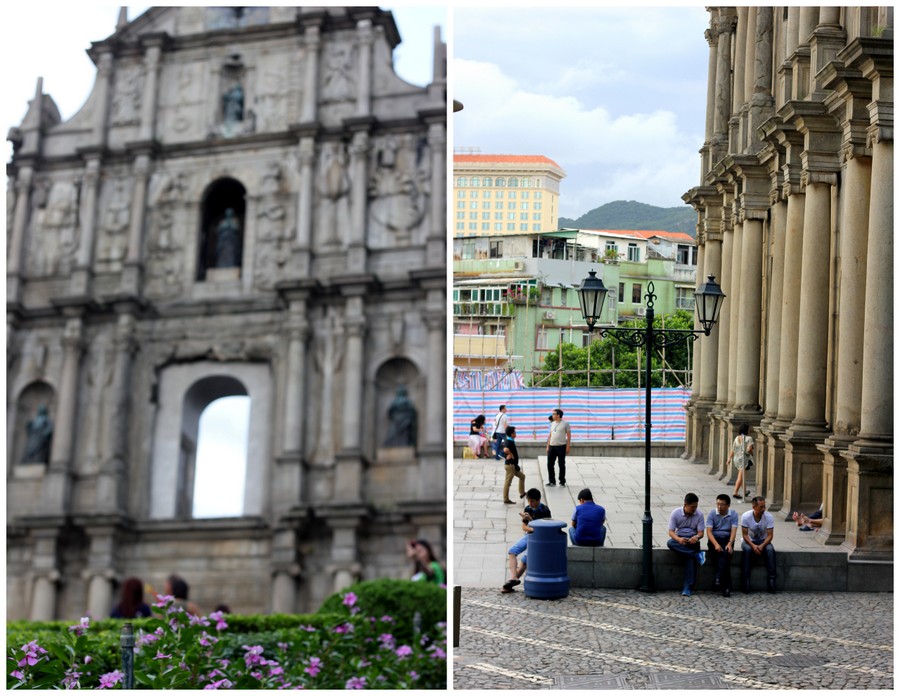 Next we headed uphill to the Portuguese-built Guia Fortress which dates back to the 1600s. 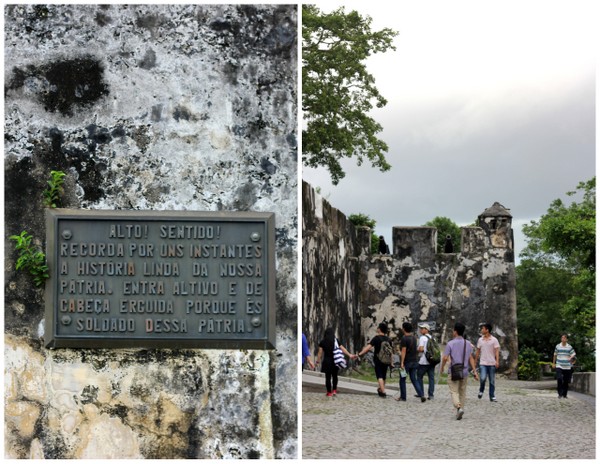 And because I’m a crappy tourist we soon rested our tired feet over jasmine tea and iced tea. I love traveling with an English person because I’m receiving such a tea education- jasmine is an herbal tea so you shouldn’t put milk in it! 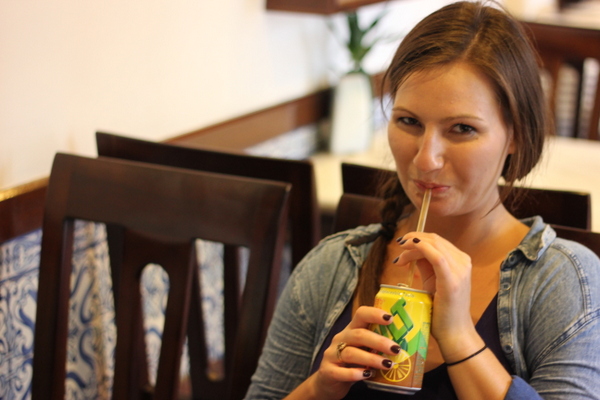 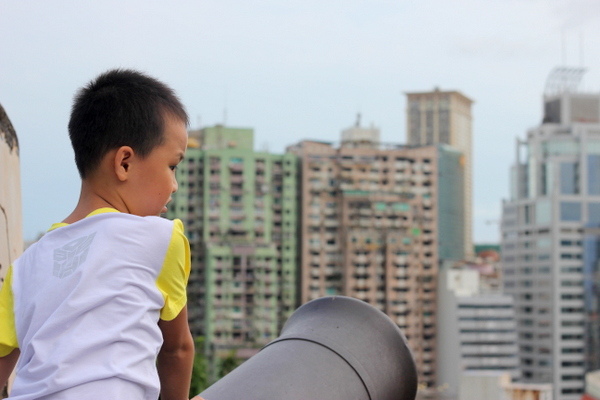 Though I love the 50mm lens I shoot with and the crispness it offers, I struggle when presented with a beautiful landscape- it’s just not wide-angle enough to take it all in. Ugh. But the views from Guia fortress stretched from mountain to city to sea, and were well-worth the climb. 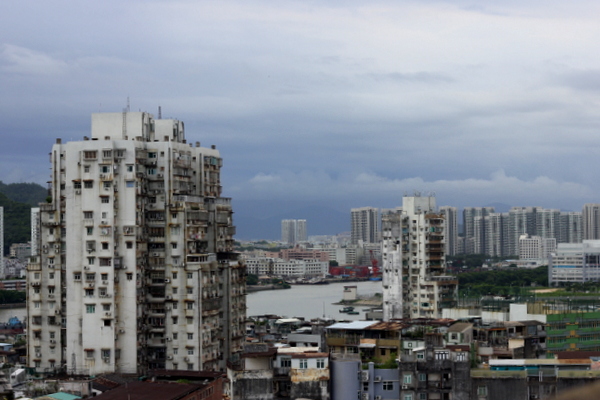 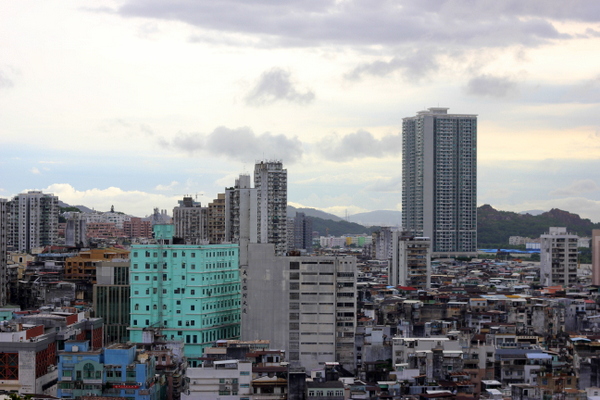 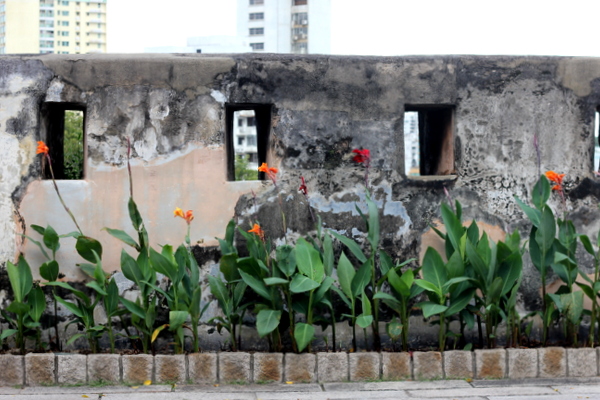 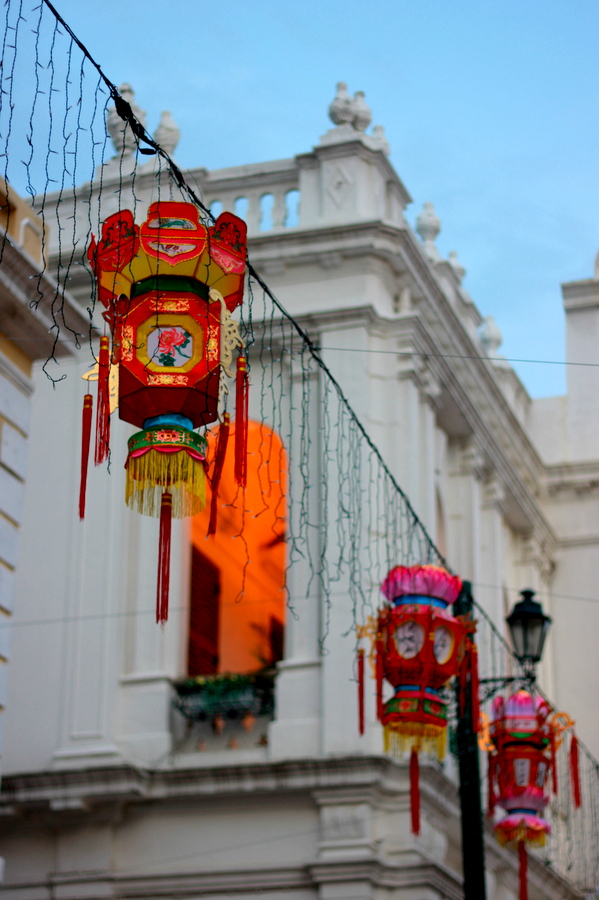 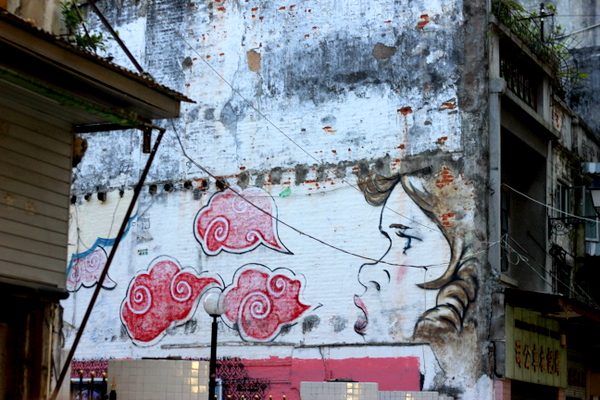 As night drew in, we made our way back to the town center to meet the lovely Audrey of That Backpacker for dinner. For dinner I had clams in a basil and pepper sauce, which seemed vaguely like a Portuguese-Chinese fusion dish. Maybe? 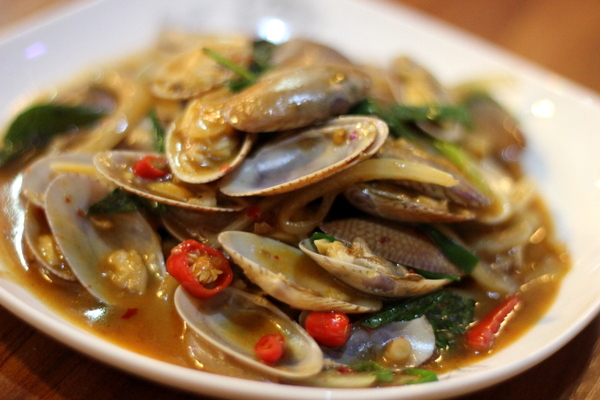 Regardless about the clams, Macau itself was certainly a fascinating example of Portuguese-Chinese fusion that I was so lucky to see.

Have you ever been to Macau? Did it intrigue you as much as it intrigued me?