So today we’re hearing from Julie of The Red Headed Traveler, a long-time commenter and fellow food-obsessed wanderer. She nerds out about literary destinations just like yours truly (she’s been to Neruda’s houses in Chile too!) and loves to cook- I especially want to try her Potato Pizza recipe. Because yum. 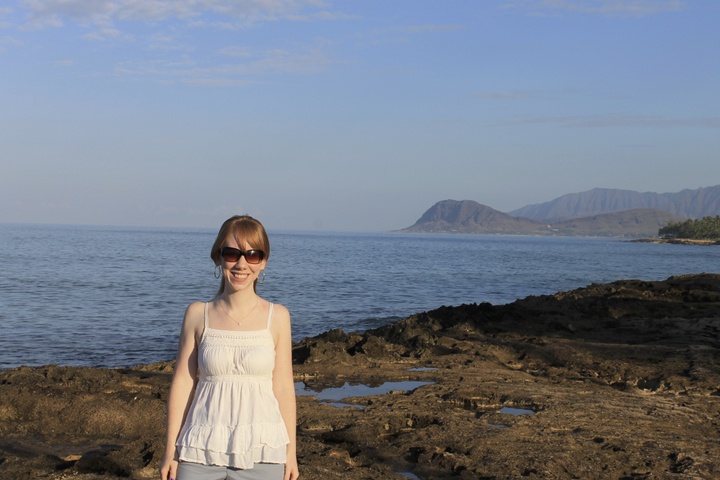 How long you’re been blogging: 4.5 years

Favorite hostel: I haven’t stayed in hostels in a while but I loved the Hostel Oasis in Granada, Nicaragua and Milhouse Hostel in Buenos Aires.

Favorite hotel: Either the Aston Mahana on Maui (It wasn’t anything fancy but all rooms were oceanfront and literally right on the beach, you could hear the waves crashing each night) or the Westin Palace in Madrid (I’m a sucker for historical properties, especially when they’re super luxurious.)

Favorite piece street art (with a photo!): It’s located in one of Pittsburgh’s residential neighborhoods, fittingly, close to an Indian restaurant. 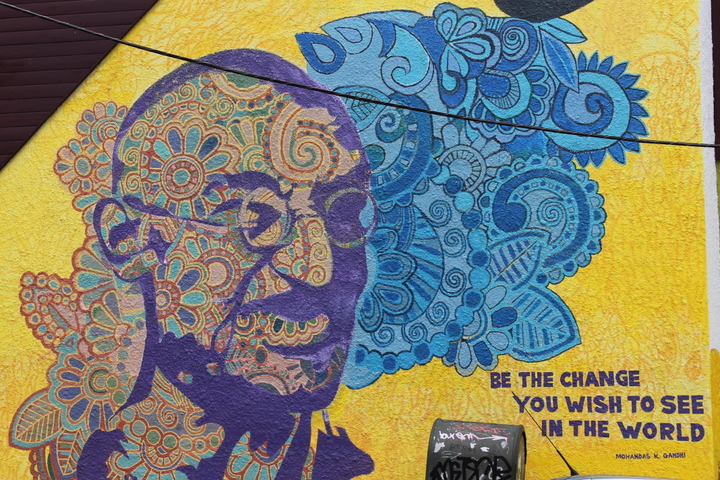 It’s fun to be interviewing a fellow Spanish major! Where did you learn Spanish? Do you use your Spanish a lot when traveling?

I didn’t start learning Spanish until my freshman year of high school. But unlike many other Americans I absolutely loved the idea of learning another language and perhaps with the exception of history (well, I minored in that), I truly didn’t want to study anything else in college. Sadly, I don’t use my Spanish as much as I would like when I’m traveling; this is probably due to the fact that until my trip to Peru last year, I hadn’t been to a Spanish speaking country in over five years which was terrible! I also live in Pittsburgh which is probably the only major American city that DOESN’T have a sizable Spanish speaking population. Needless to say I get incredibly jealous when I travel to other American cities and there’s signage in both English and Spanish. That, and cities that have more than Tex-Mex fare (I pine for the day a pupeseria opens here).

In addition to Europe, it seems like you’ve traveled a ton in Latin America. What draws you to that part of the world?

While I’ve certainly traveled to and lived in countries where I didn’t speak the language (South Korea for starters), there’s no better feeling than going to a country that doesn’t speak your native language yet you speak theirs. So language definitely plays a major role as to why I’ve always loved traveling there. But Mexico was the first country I ever visited (when I was 16 I was an exchange student there for the summer) so needless to say the country and its people always have a special place in my heart and I always love going back. I also love history, bright colors, and good food, and in my opinion every single country in Latin America in some facet has all of those things. Latin America is probably one of the most culturally rich and fascinating places you could ever visit-a true myriad of senses.

Considering I’ve just started a 9-5 I think it’s incredible that for the past four years you’ve been blogging while working a full-time job AND writing a book! How do you juggle it all?

It’s tough and now more than four years into blogging, the “burnt out” feeling definitely has started to pop up more frequently. I post somewhat fanatically (about four-five times a week) but recently decided for my own sake it was worth taking a step back. Since I started regularly blogging, I always try to have at least two or three posts in my repository at all times; it helps knowing that if I’m not up for writing/trying to think of new content, I at least have posts already done. It also lessens the pressure of “having to write,” and instead makes me enjoy the writing part more.

Having a repository of stored posts also helped out a ton when I was working on my book. I wouldn’t say my blog was relegated to the back corner during this time as I still posted regularly, but all of my creative energies were definitely going into my book’s writing and editing.

I’ve gotten good with time management where my blog is concerned. Ask me about my exercise regimen and other non-blog activities and you’ll see that it’s still a major work in progress! But it doesn’t matter how old you are, time management is tough for sure.

You wrote in one of your posts that being a part-time travel blogger is more laborious than being a full-time one. Could you tell us a little bit more about that?

For 40 hours a week, I work in a job that has nothing to do with blogging, social media, or even writing. So everything I post on my blog is written during my own personal time, which some weeks doesn’t feel like too much when you add up all of “life’s activities.” It’s a personal commitment of mine to keep my blog for sure (as in I’m neither obligated nor required to), but in a sense it still feels like a second full time job with all the work I put into it (and I’m sure other part-time travel bloggers definitely feel the same). There are definitely days where I would like to say to the blog “to heck with it all” if work was stressful or I have a lot going on in my personal life but those feelings are short-lived. I know I would be more disappointed in myself if I did just “abandon” my blog prematurely!

You recently wrote and self-published a book of fictional short stories! That’s awesome. How long did it take you to write and what’s the response been like? And did Candace Rardon do the illustration for the cover?

I started writing them in the late summer of 2013 and by early winter 2014, I was finished, although for a couple of them I did make major revisions. Learning to write dialogue was also tough, that is if you want it to seem natural and have fluidity to it. Then there was the never-ending editing process! The response has been overwhelmingly positive which means the world to me, especially several responses that have come from people who told me they were never really “short story” fans. Many also were just surprised that I undertook such a venture. Yes, she did the cover art too and as many people know, she is simply amazing! And also one of the sweetest people you’ll ever meet (well, this is a cyber-context but I’m sure she’s even sweeter in real life!).

So you’ve said “I’m not a backpacker and will never be.” That’s rare in the travel blogging world! Would you care to elaborate?

When I travel I like to travel comfortably, and no, that definitely doesn’t mean five star hotels and champagne and caviar at every meal. (For the record I also shop at Ross and TJ Maxx and drive a tiny hatchback, so I’m not a big spender by any means!) But if there’s a particular restaurant I want to dine at on a trip, I will. Working full-time allows me to not have to always limit myself when I travel and that’s key to me. I still obviously exercise moderation but I’m neither pinching pennies nor racking up huge credit card debt when I’m on the road. I know many travelers believe that travel is more about the experience and less about the secondary things (eating, accommodations) but to me those things ARE part of the overall experience. One of the hotels I stayed at on my trip to Peru was built on top of Inca ruins (there was even a small gallery of artifacts recovered) and used to be a former Spanish convent. Paying somewhat more on my hotel room definitely offered an extremely unique and memorable experience.

I’m also a chronic over packer which doesn’t exactly mesh in the backpacking world (I know, bad…) and after a nightmare stay at a Costa Rican lodge on Chira Island during my semester abroad there (our rooms were infested with mutant grasshoppers), I decided that I would only stay at places where the walls WERE connected to the ceiling!

So you mentioned on your blog that you’re married. What’s your experience been like traveling alone vs. traveling with a romantic partner?

So tough (well, partially kidding here)!, But especially when your romantic partner’s idea of the perfect trip is the exact opposite of yours! Traveling alone is obviously ideal in the sense that whatever you want to do and wherever you want to go, you’re the one calling all the shots. Traveling with your significant other definitely means compromise, especially if you have different tastes in stuff or your partner isn’t as adventurous as you are. We’ve been traveling together since 2007 and while there are some destinations I’m dying to see, they’re much lower on my husband’s radar (well, some are probably not even on his radar), everything I’ve wanted to do in the destinations we have visited, I’ve done. And thankfully I have carte blanche where restaurant selection is concerned-it pays to be an advanced (and somewhat anal) planner!

You love to cook. (Me too!) And I read that you love to recreate recipes you try abroad in your own kitchen. What are some of your favorite international recipes you’ve cooked at home?

And just for fun- I love to make croque monsieur at home too! What’s your recipe?

I actually haven’t made a croque monsieur (I sure have feasted on them though), however, I have done its counterpart, the croque madame. Here’s my recipe.

So let’s hear it! Anything else you want to know about Julie?

0shares
This post may have affiliate links, which means I may receive commissions if you choose to purchase through links I provide (at no extra cost to you). Please read my disclosure for more info.