Let’s just get the tough stuff out of the way: my ten-day Himalayan trek in Northern India was hard. While I didn’t get altitude sickness, I did suffer from blood blisters and sunstroke. And obviously, there was the whole not showering for 10 days thing and hiking EIGHT HOURS UPHILL under the blazing sun.

I’ll be the first to admit that I’m not that outdoorsy. My cardiovascular health leaves something to be desired and as a Michigander, I’m naturally averse to hills. 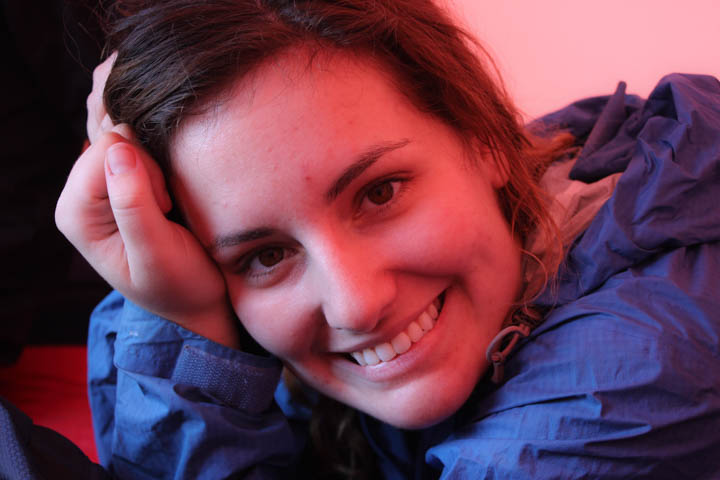 So yeah. The trek was character-building. But it also got me in the shape of my life and was full of some of the most beautiful moments (and views) of my travels.

Plus, how often do you get to spend 10 technology-free days with good friends in the Himalayas?

And thankfully this was no bare-bones camping trip. This was glamping. We had two guides, a cook, five porters and a team of mules to carry our bags. Not only did we enjoy multi-course meals each night, the crew set up our tents before we got to the campsite.

We even had a TOILET TENT. Who knew those existed?

Also, because this was India, our ten-day trek cost us $440 each- an absolute steal.

I set off from Rishikesh with my three trekking buddies (McCall, Alice, an English girl from Yoga Teacher Training and Joe, McCall’s friend) to reach the starting point of the trek. Meaning we endured the dreaded Party All Night song for ten hours in a minibus on tiny mountain roads. Also, Alice puked about 10 minutes into the trip so not only did we have to listen to moronic Hindi music on repeat, the bus smelled strongly of vomit.

The first night, and I kid you not, we camped in a field of marijuana. And we took selfies with a few ornery water buffalo.

After our first night camping, the real work began: hiking. And despite a rigorous month of Yoga Teacher Training, hiking uphill made my heart beat faster than a chipmunk’s.

The highlight of the day? (Besides the rest stops?) Passing through a lovely little mountain village. 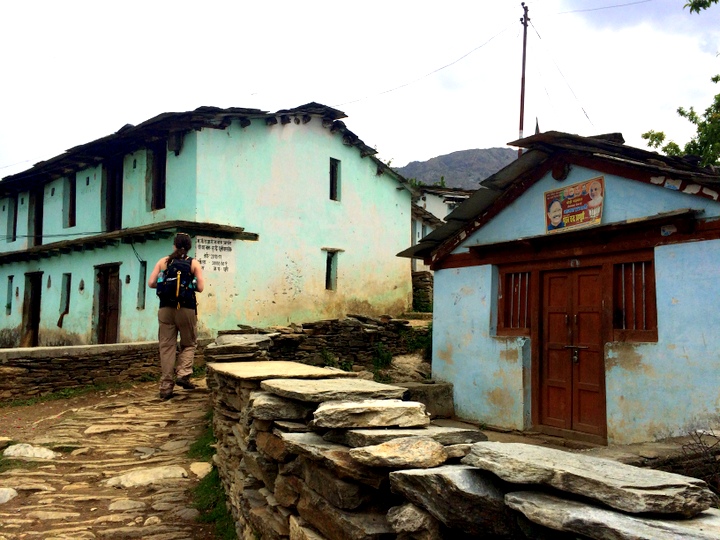 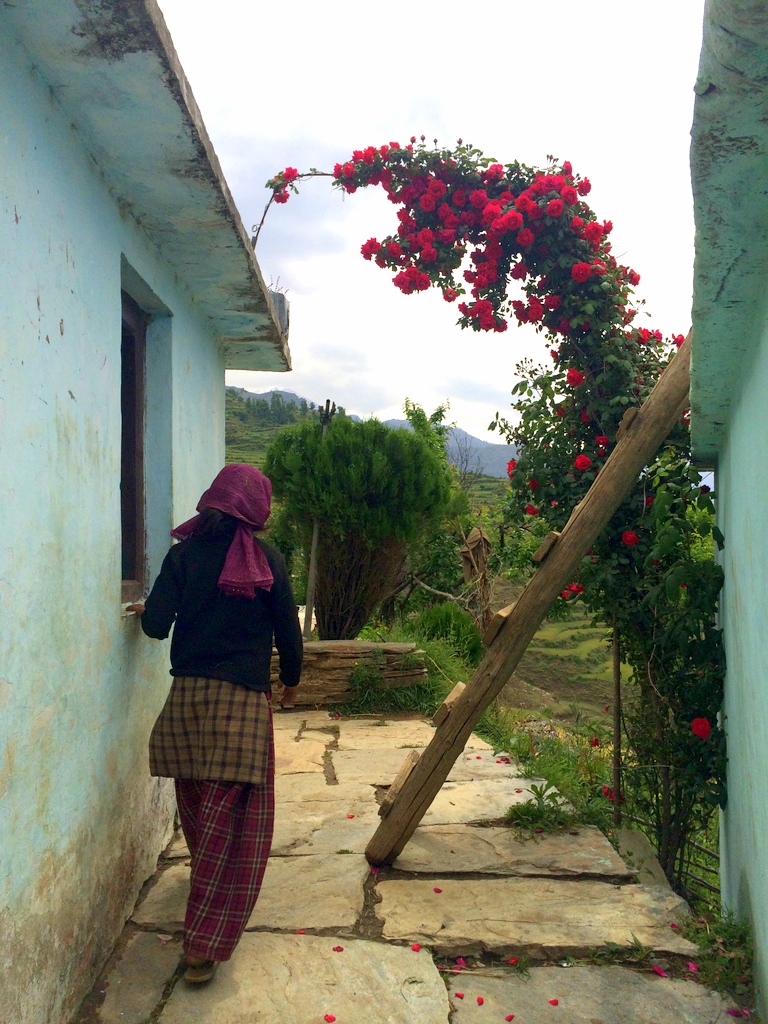 The village was quaint in a ramshackle Himalayan way: awash in turquoise and blue and smelling of sun-warmed cilantro. As we passed the villagers said, “Namaste” and tipped their heads to bow.  The streets were strewn with red rose petals, and golden wheat and fields of potatoes grew outside the slate walls.

And being India, there were lots of cows. 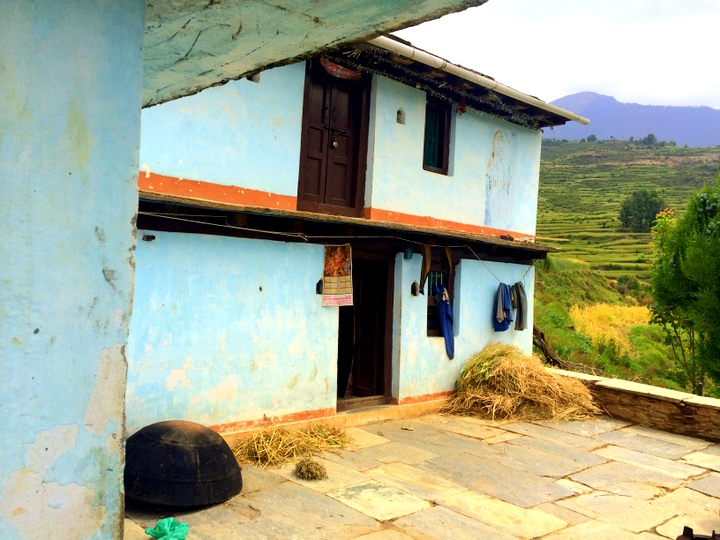 We stopped at a middle school for a lunch of yak-cheese sandwiches and hard-boiled eggs. The kids seemed excited to see foreigners, smiling and waving. They lined up in uniform to greet us, the girls with floppy white bows in their hair. I noticed their features were almost Nepalese and many of them had beautiful yellow-green eyes.

When we finally trudged into camp that afternoon the tents were already up, and water buffalos, donkeys and cows grazing. 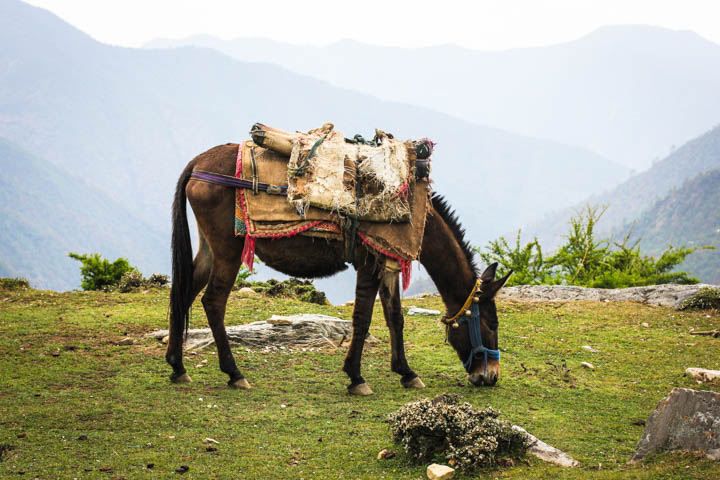 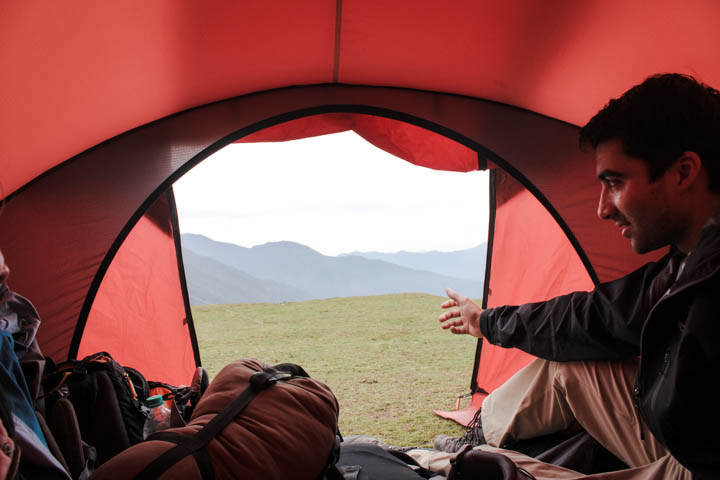 As I gazed out of the tent I had a “I’m-so-lucky-what-on-earth-did-I-do-in-a-past-life” kind of moment. It was surreal. I felt so much joy and gratitude to be in the mountains. 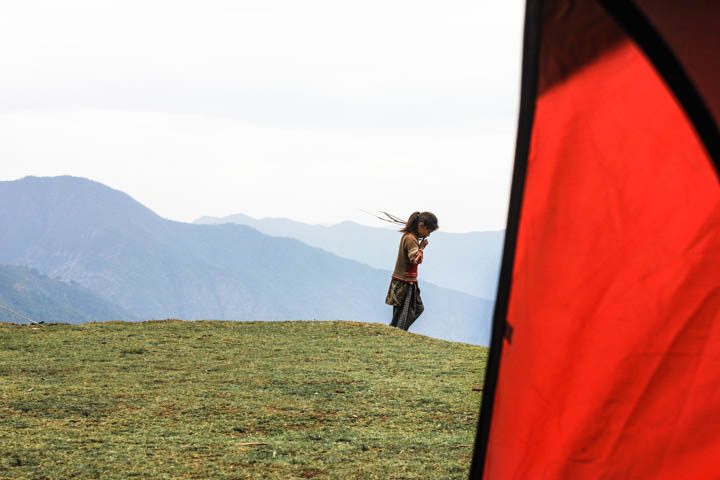 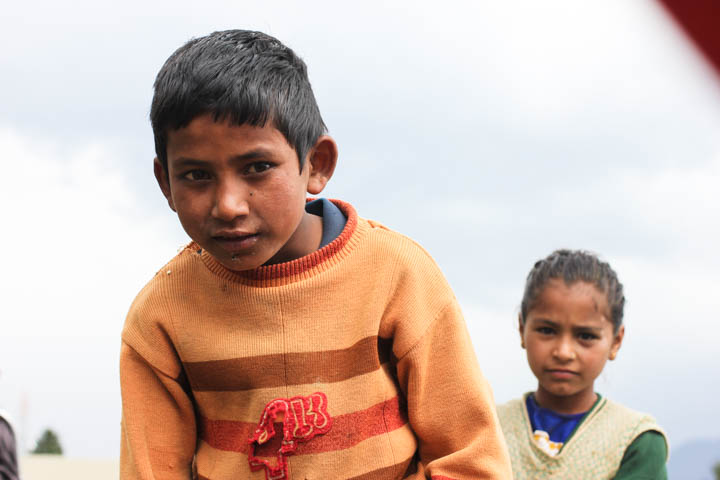 Soon after we settled in dozens of kids approached, and we ended up spending the rest of the afternoon entertaining them. I felt like I was babysitting again as McCall, Alice and I played jacks with the girls, while Joe played cricket with the boys. 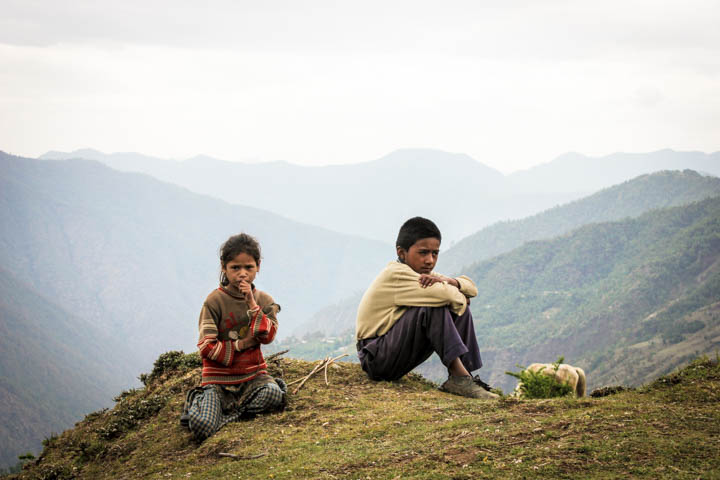 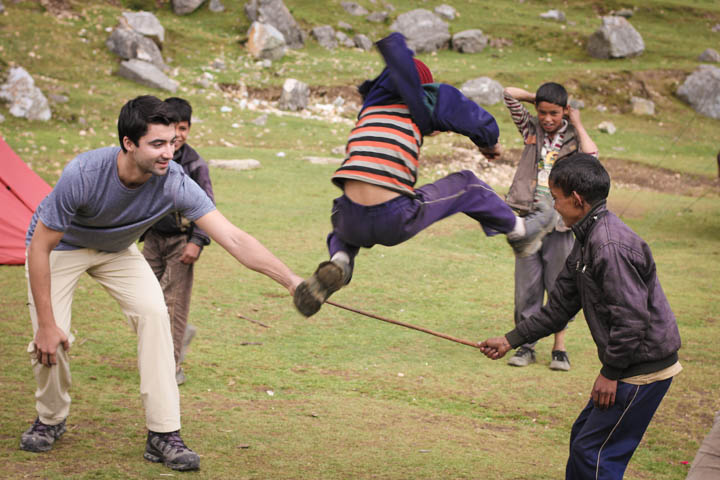 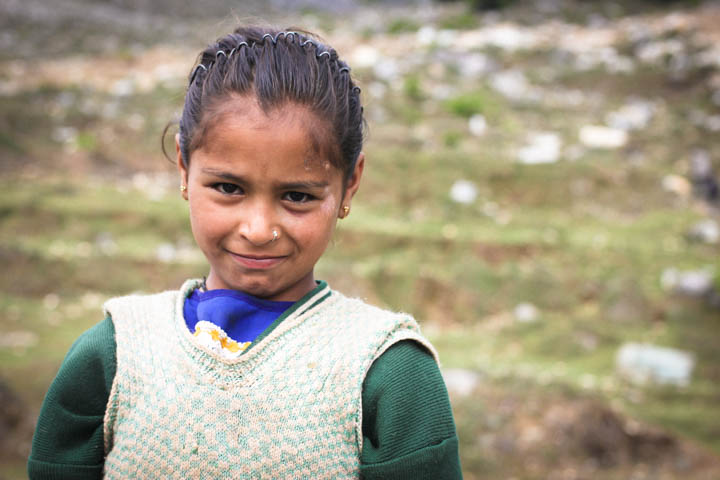 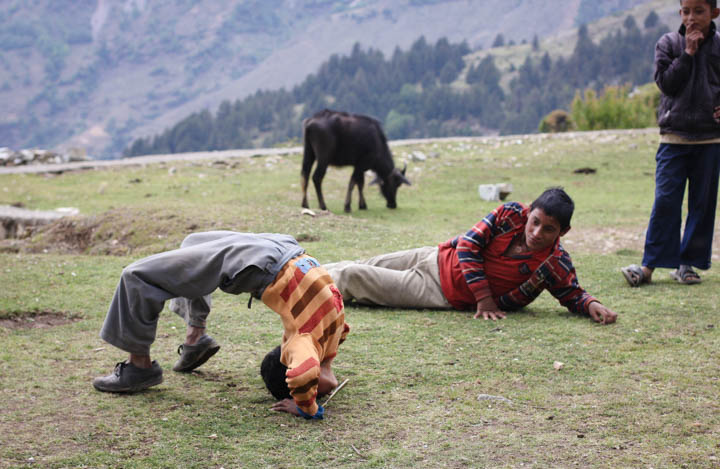 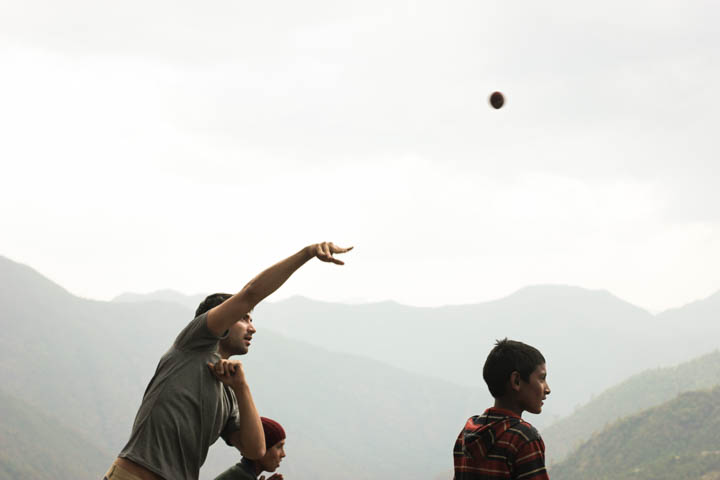 At one point we sat in a circle with the kids and sang Sanskrit hymns. Oh yoga school, what have you done to me? 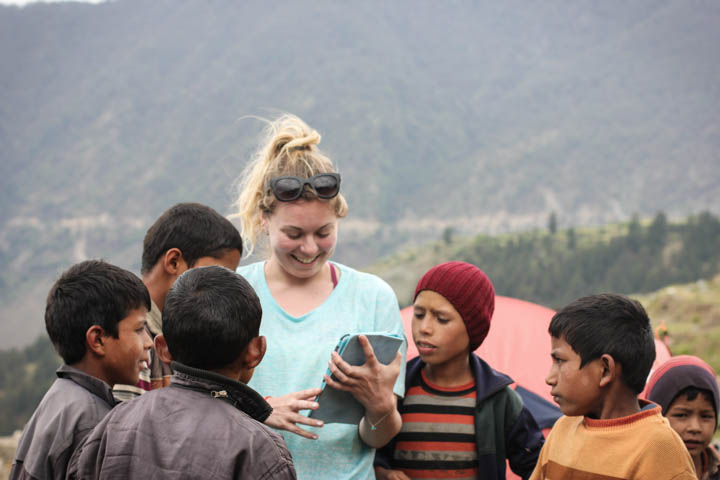 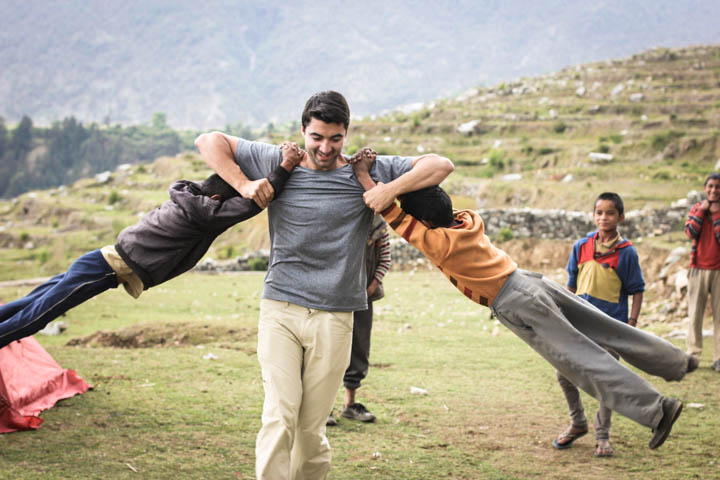 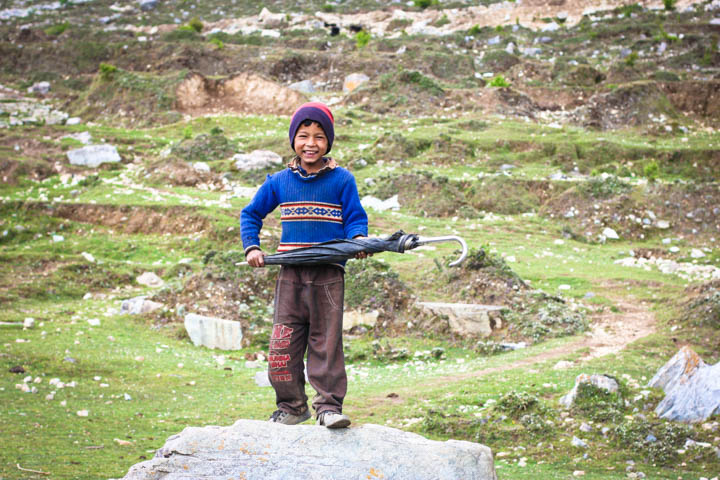 At four we convened in the tent for a chai break. Over the course of the trek, I grew to love tea time, as we sipped our chai over cards, cookies and jokes. There’s no quality time quite like camping.

That night we fell asleep among craggy rocks and little white flowers, listening to the jingling of the cowbells and the snort of water buffalo.

Okay fine, that made sleeping in the tent sound way more idyllic than it actually was. More like I slept fitfully during a violent, tent-shaking rainstorm. Also, I decided that I hate sleeping bags as they make me feel like I’m going simultaneously sweat and freeze to death.

The second day of hiking was a bit less blissful, as blood blisters began forming on my feet. Also, McCall got severe food poisoning and we had to wait out a storm in a shepherd’s hut. A.k.a. we spent two hours wet, freezing and crouching in animal excrement.

But our campsite that night made up for any of the day’s woes. We slept in a fairy glen full of enormous white flowers and tiny streams. 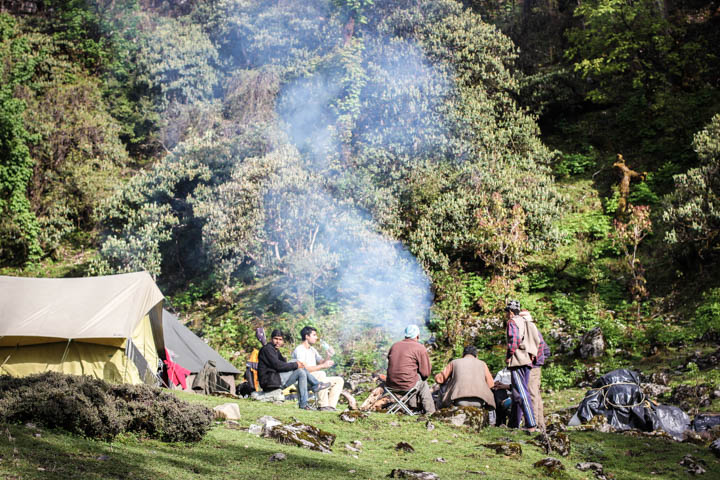 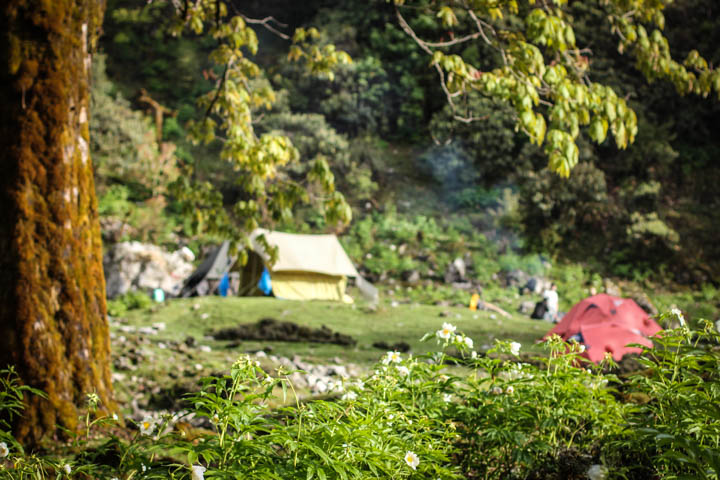 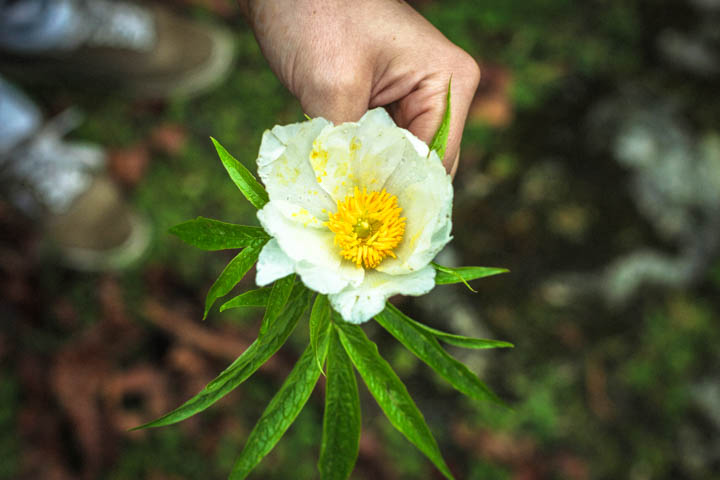 (Confession- when I was drying my boots by the fire I partially melted off the back of them. I would.)

And if I didn’t think sleeping in a sleeping bag could get any worse, I was wrong. Because that night I tried sleeping naked as I heard it would help me stay warmer. Uh, no. During the night I periodically awoke shaking from cold and slick with sweat, my nose transformed into an actual icicle.

The third day was the hardest of the entire trek. Despite my SPF 50, I developed a high-altitude sunburn on my hairline and nose. During our eight-hour, mostly uphill hike, motivational mantras buzzed through my head, “Hike at your own pace”, “clear the chittah”, “stronger and stronger.” None of them worked very well.

And finally, out of desperation, I prayed to God to carry me the rest of the way because I was so blistered, sunburnt and exhausted I wasn’t sure if I would make it. I blame sunstroke.

Moments later three children spotted us, shouted for “candy” and followed us all the way up the mountain. As they got closer they started singing songs like “Twinkle Twinkle Little Star”, which in their adorable accent sounded like “Tinkle Tinkle Little Staa”.

I joined them in song, racking my brain for childhood ditties like “Baa Baa Black Sheep” as well as the Gayatri mantra, Wakatrunda and Om Asato Ma Sadgamaya.

So what I’m trying to say here is that God sent three adorable Himalayan children to help me get up the mountain. Or something like that. 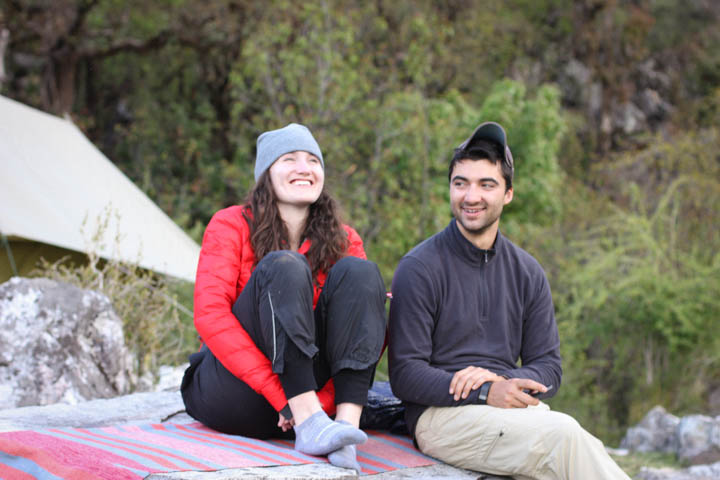 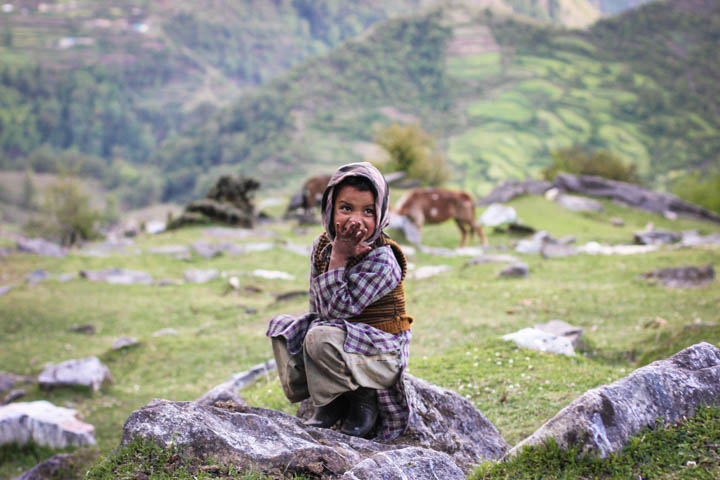 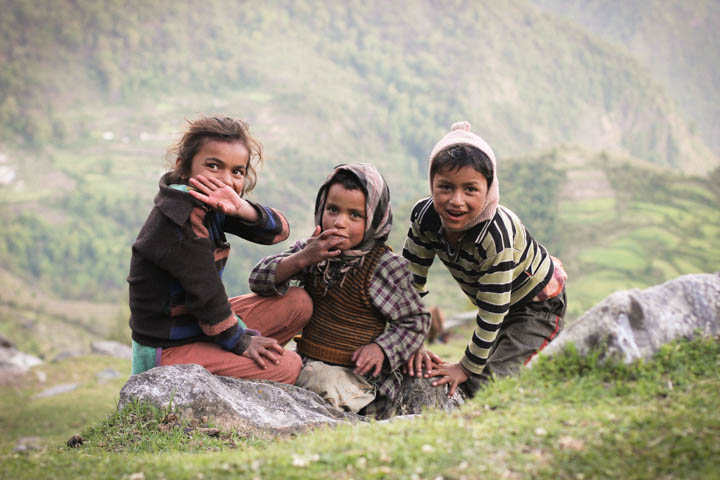 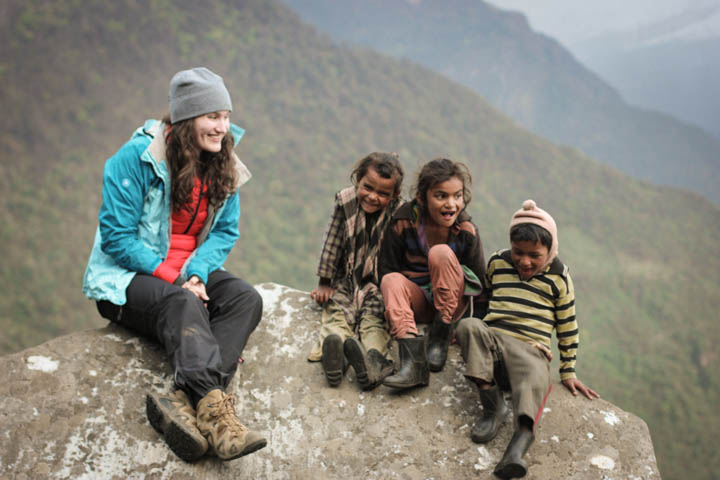 As I crawled to camp, I knew I had just begun my Himalayan journey. But already I was proud of myself for pushing myself further than I ever thought I could go.

Read about part two of my Kuari Pass trek here.

Have you ever done a trek in a foreign country? What was your experience like?