After failing to sleep on a six-hour long bus ride from Sihanoukville during which the driver mercilessly blared Khmer pop music at top-volume, I was thrilled to reach Phnom Penh.

And after being charmed by Siem Reap, I was expecting to adore Cambodia’s capital city.

But I didn’t care for Phnom Penh. To be honest, I don’t really see how anyone could. 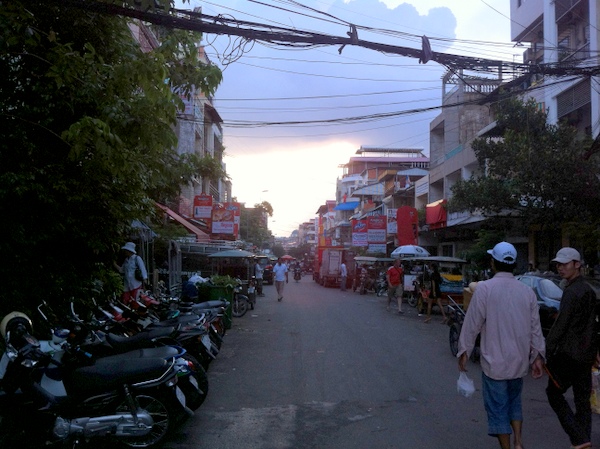 I found it a filthy, scattered city lacking memorable architecture as well as a discernible center. Phnom Penh struck me merely as an unending sprawl of squalor.

But regardless of how I felt about the city, Phnom Penh was a huge highlight of the trip when everything just fell into place, due in no small part to finally turning a corner in Koh Rong.

Here are a few of the things I did in Phnom Penh, some of which impressed me and others not so much. 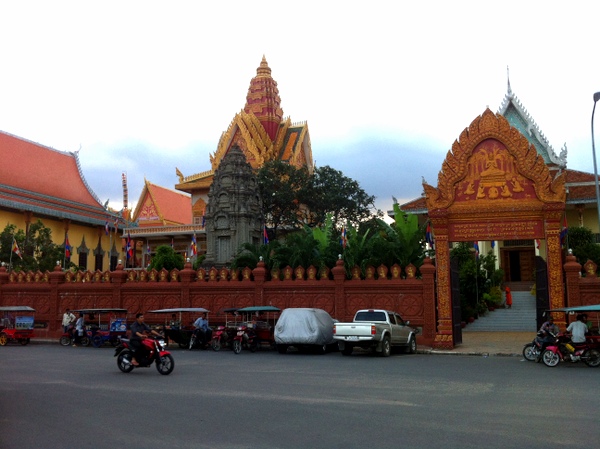 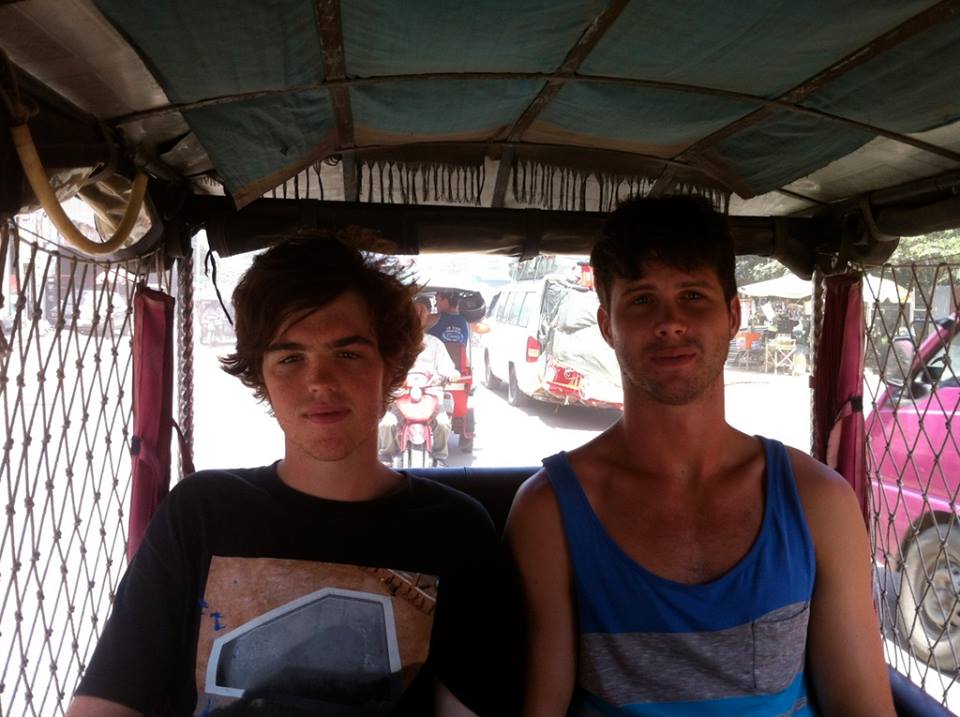 In a tuktuk driving on Phnom Penh’s dusty roads, heading to both S-21 and the Killing Fields.

S-21, also known as the Tuol Sleng Genocide Museum, is a former high school turned torture center used by the Khmer Rouge from 1971 – 1975. One of many execution centers in Cambodia, more than 15,000 Cambodians were detained, tortured and killed at S-21. 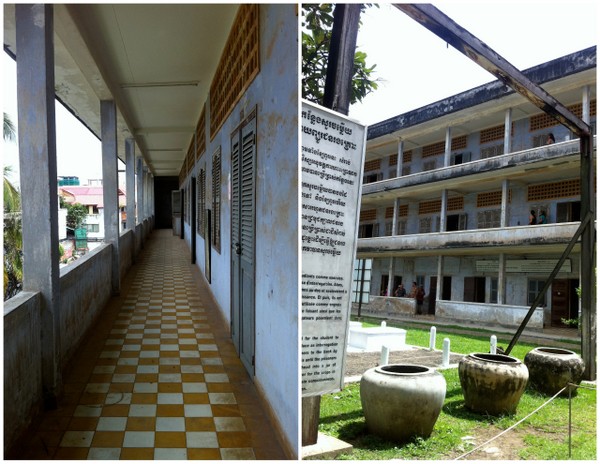 At left, one of the hallways leading to the prison cells, at right, basins in which victims were tortured by being dunked into water repeatedly. 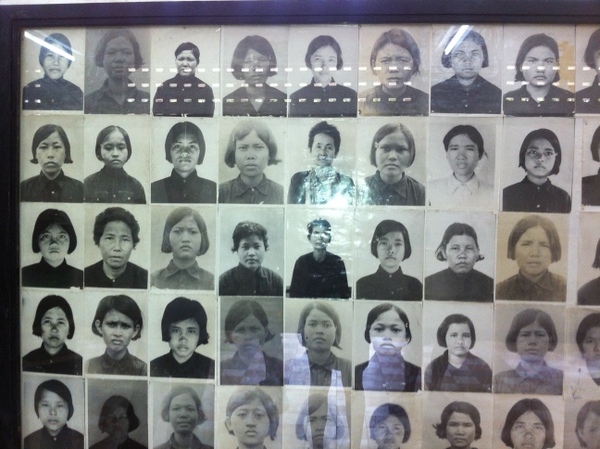 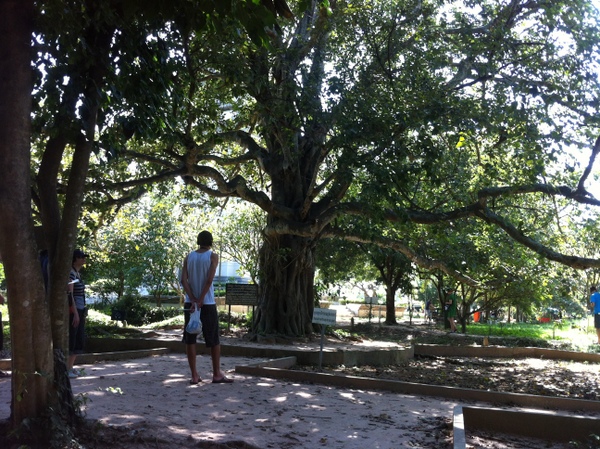 The Killing Fields, or Choeung Ek, were used as a burial site and execution spot for thousands of the Khmer Rouge’s victims. They are now a memorial and education center.

Pol Pot, Cambodia’s deluded socialist dictator, envisioned a radically agrarian state in which the majority of the population worked as field-laborers. I975 the Khmer Rouge imprisoned all educated Cambodians. Some were imprisoned just for wearing glasses.

During the Khmer Rouge regime bullets were a precious commodity so prisoners were murdered by being bludgeoned to death, often with farm tools. The atrocities committed at the Killing Fields were truly nightmarish.

It’s hard to put some of the things I saw at the Killing Fields into print: Teeth, bones and bits of clothing poking up from the earth, a tower filled with human skulls, a tree against which executioners bludgeoned babies, a shallow mass grave filled with dead women and children. 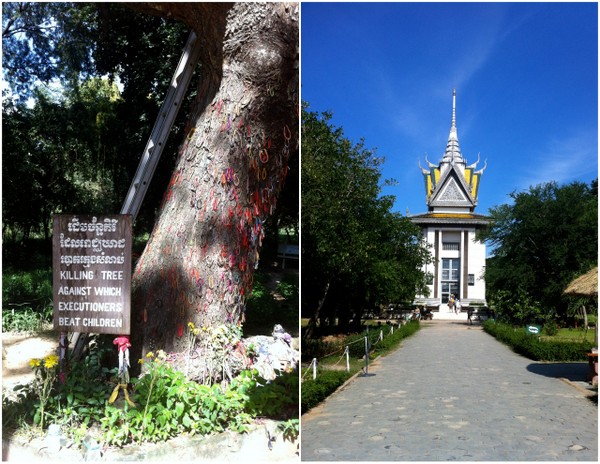 Before visiting S-21 or the Killing Fields, I would highly recommend reading First They Killed My Father, a chilling, beautifully written memoir of a young girl forced to become a child soldier during the Khmer Rouge regime. 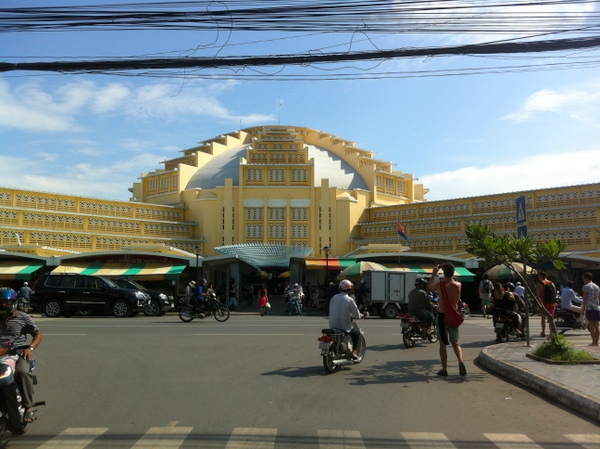 On a much lighter note, I also enjoyed some bargain shopping at Central Market. I finally purchased a pair of Ray-Bons (ha) as I hate taking my real ones to the beach. I also snagged a SAME SAME BUT DIFFERENT t-shirt that I promise only to sleep in.

My favorite part about the market was actually the building that houses it, an airy, Art-Deco building designed by French architect Louis Chauchon.

To be honest I haven’t figured out why the Foreign Correspondents Club is quite so famous. Aside from the glamorous name, it’s just an over-priced bar.

Side-rant – The FCC is touted as the best place to see the sunset in Phnom Penh but the building faces east (!!!) so you can’t even see the sunset. Quoi? 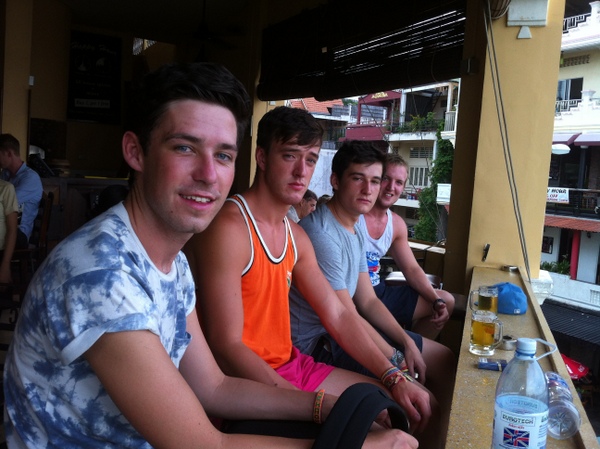 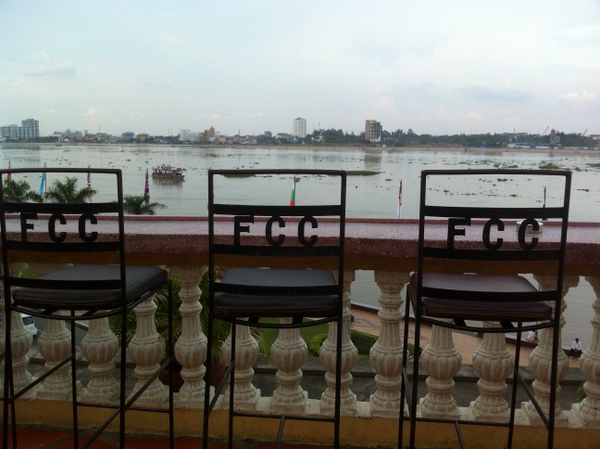 But the views over the river and Sisowath Quay are photo-friendly, so come if you can stomach mediocre food and an over-priced menu. 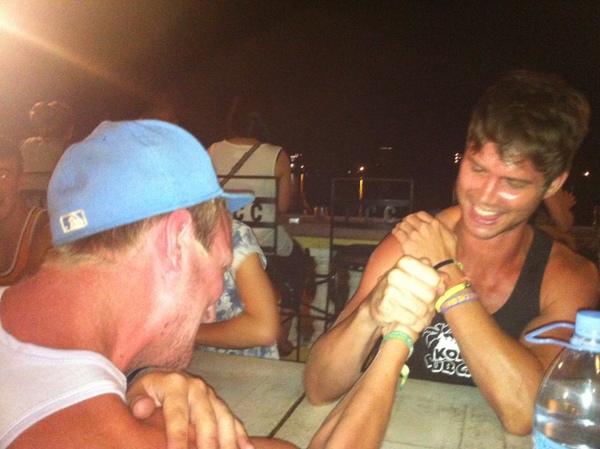 And feel free to class the place up with a rooftop arm-wrestling contest like we did.

One thing I never managed to find in Cambodia was a significant French influence. Alas, the two examples below are the only remnants of Indochine I discovered in Phnom Penh. 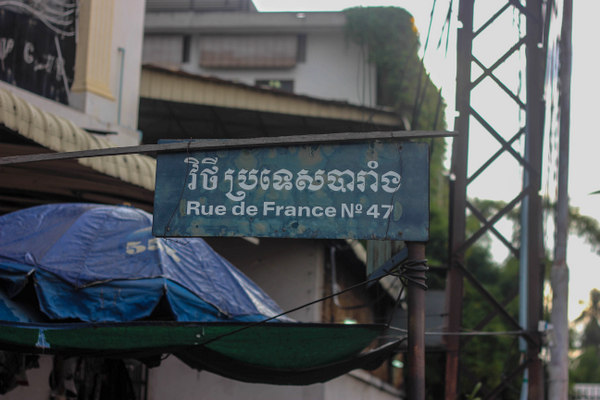 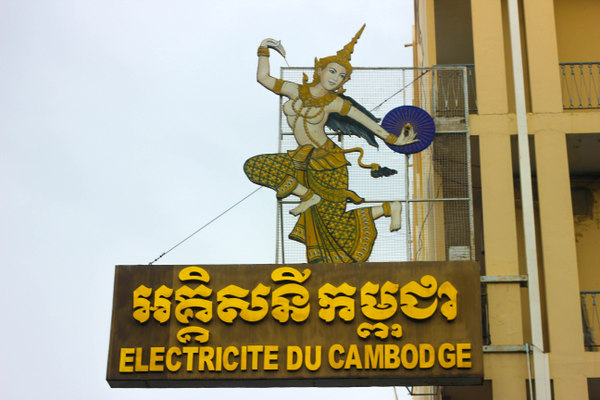 And if you decide to party in Phnom Penh, be aware that many children will hassle you to buy things- and as always, don’t buy anything from them as it just perpetuates the cycle of abuse.

And make sure to never take a tuk-tuk or motor-taxi by yourself- as Adventurous Kate’s post explains, Cambodia has become a lot more dangerous in recent years. 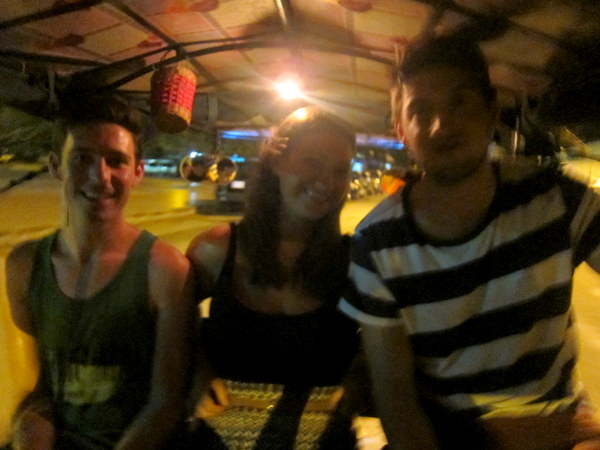 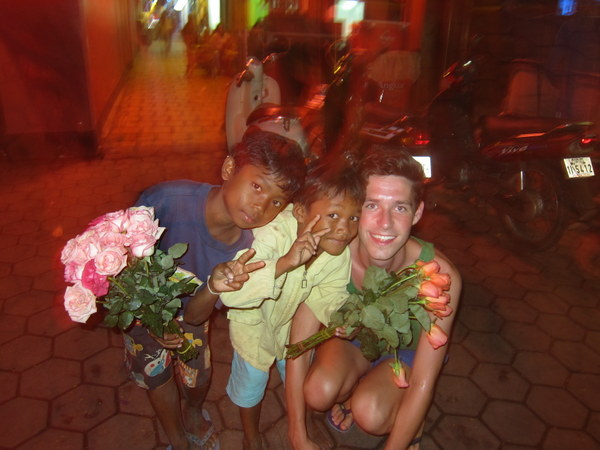 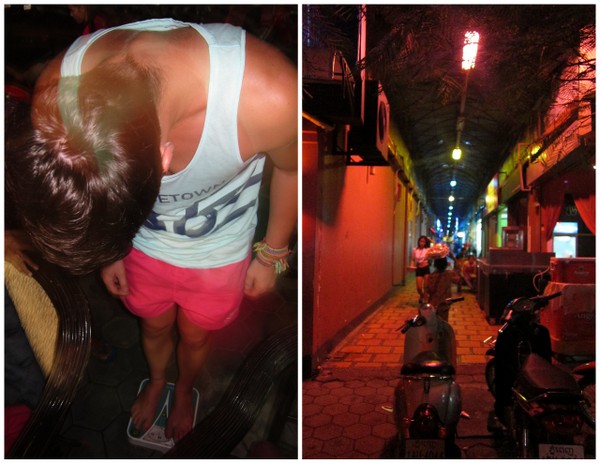 One street vendor walked around with a scale and charged partiers to weight themselves on it. I have to admit- I went for it!

Despite not really caring for the city, I had a great time in Phnom Penh. Whether I was savoring beef loklak at a local restaurant or sipping Angkor poolside at the wonderful Eighty8 hostel, I enjoyed my time in Phnom Penh. And as always in Cambodia, we had a lot of fun partying – from waking up to Eat, Sleep, Rave, Repeat to taking a few too many tequila shots.

And to be fair, I didn’t end up visiting a lot of the attractions I wanted to see. The downside of traveling in a group of eight people is that it’s hard to get things done; sadly I never munched on popcorn and watched retro movies at The Flicks Community Movie House or donned a Khmer head-dress at a Cambodian photo shoot.

Also all my friends ate fried tarantula and I opted not to do it. Stupid me.

Have you ever been to Phnom Penh? Did you like it more than I did?

2shares
This post may have affiliate links, which means I may receive commissions if you choose to purchase through links I provide (at no extra cost to you). Please read my disclosure for more info.

30 thoughts on “Let Down in Phnom Penh”